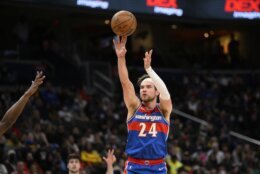 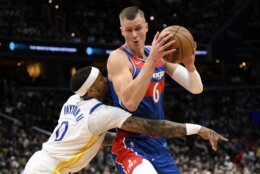 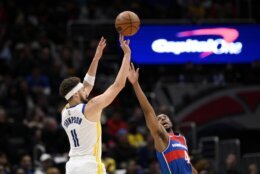 WASHINGTON (AP) — Corey Kispert scored 16 of his career-high 25 points in the first half, and the Washington Wizards beat the struggling Golden State Warriors 123-115 on Sunday night.

Golden State has lost five of its last six, and the Warriors never led in this game. Golden State was without Stephen Curry (left foot sprain) for a fifth straight contest, and Andre Iguodala (low back injury) was also out. James Wiseman (right knee injury) is done for the season.

Washington is not exactly healthy either, with Bradley Beal (left wrist surgery) and Kyle Kuzma (right knee tendinitis) missing this game, but the Wizards won their second straight — their first back-to-back victories since a three-game streak from Jan. 9-12.

Kispert made six 3-pointers, also a career high. That gives him 96 on the season, surpassing the franchise’s rookie record of 91 set by Beal in 2012-13.

“I knew was I getting close. It feels great,” Kispert said. “I feel really good about it, but I also played a lot more games than Brad did his rookie year.”

Beal played 56 games as a rookie. This was Kispert’s 69th this season.

“It looked like they were getting wide open shots from 3 most of the game,” Warriors coach Steve Kerr said. “I didn’t like our ball pressure or our general body language in the first half. I didn’t think we brought it, I didn’t think we competed.”

Washington had a pretty comfortable lead throughout the second half, but the Warriors did cut it to five with 32.5 seconds left in the game when Damion Lee made a free throw.

After a free throw by Washington’s Tomas Satoransky made it 121-115, Thompson missed a 3-pointer at the other end.

Draymond Green had seven points, six assists, five rebounds and three steals — but the Warriors were outscored by 20 with him in the game.

“I’m playing terrible,” he said. “I’ve never really been on a team that gets worse when I’m on the floor and that’s kind of where we are right now. Some things I can correct, some things will come with time. Just kind of is what it is.”

Kispert said he and Rui Hachimura, who went to Gonzaga, lost a bet to teammate Daniel Gafford, who went to Arkansas. The Razorbacks beat the Zags in the NCAA Tournament on Thursday night.

“Gaff has a hundred pushups in the bank, and he can make me do pushups whenever he wants,” Kispert said. “He’s used about 10 of them. If you see me kind of drop down and do a pushup in warmups or in the huddle during a timeout, that’s the reason why.”

The Wizards now trail Atlanta by five games for the 10th and final postseason spot in the Eastern Conference — with only eight to play.

Golden State is four behind Memphis for second place in the West and fell to two ahead of Dallas.

Warriors: This was Golden State’s last regular-season game against the East. The Warriors went 20-10.

Warriors: At Memphis on Monday night. 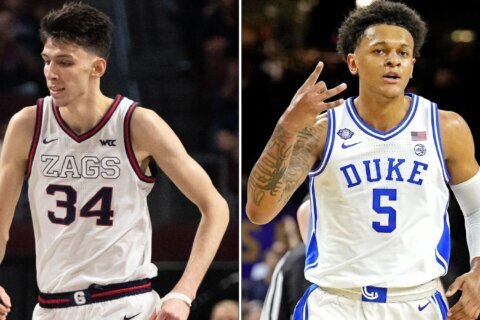 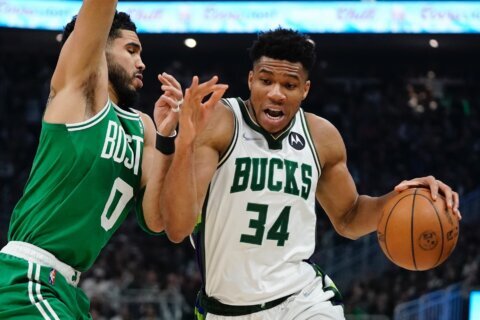 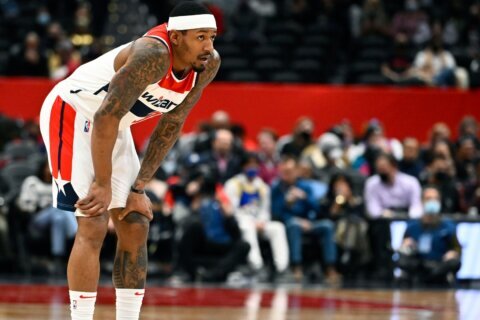