Nikola Jokic had 29 points and 13 rebounds in an efficient 26-minute performance to help the Denver Nuggets cruise to a 127-109 victory over the struggling Washington Wizards on Wednesday night.
Listen now to WTOP News WTOP.com | Alexa | Google Home | WTOP App | 103.5 FM
(1/9) 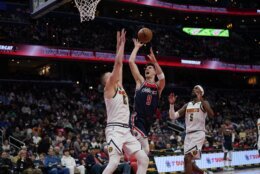 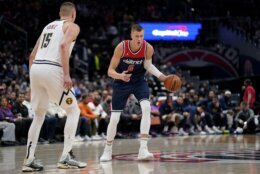 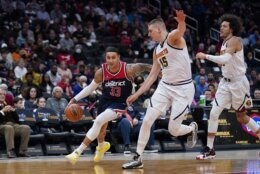 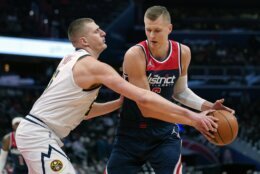 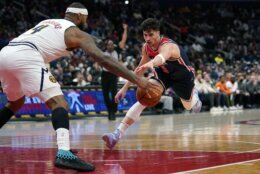 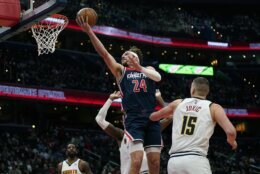 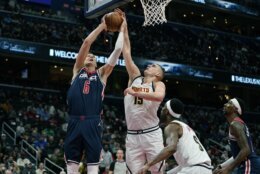 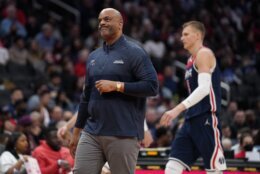 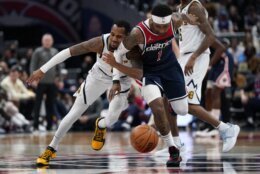 WASHINGTON (AP) — Nikola Jokic had 29 points and 13 rebounds in an efficient 26-minute performance to help the Denver Nuggets cruise to a 127-109 victory over the struggling Washington Wizards on Wednesday night.

Jokic reached 10,001 career NBA points — all with Denver — and added eight assists while falling two shy of his 19th triple-double the season.

The four-time All-Star shot 10 of 14 from the floor, hitting both 3-pointers and all seven foul shots he attempted as the Nuggets improved to 2-0 on their three-game East Coast trip.

“There is no easy one for us,” Jokic said, despite the comfortable win. “I think we are working for every game, and to be honest that’s how it’s supposed to be. I think there is no easy game for us.”

The sixth-place Nuggets remained 1 1/2 games ahead of seventh-place Minnesota and 1 1/2 behind Dallas, with both also winning Wednesday.

“It seems like we’re meshing really well,” said Austin Rivers, who added 13 points as one of seven Nuggets in double figures. “It just feels like the chemistry is there. The ball is moving. The second unit is definitely even kind of going that right direction.”

Deni Avdija scored 19 points for Washington, which has lost five straight and continues to lose ground on the Eastern Conference play-in places.

Kristaps Porzingis added 16 points and Corey Kispert had 15 as the 11th-place Wizards fell five games back of 10th-place Charlotte.

“I think we started off slow, missed some easy ones,” Porzingis said. “I think we smoked a lot of layups today, and then we couldn’t pick it up from there.”

Washington shot only 21.7% from 3-point range (5 of 23) on a night very little was in doubt other than the possibility of a Jokic triple-double.

Coach Michael Malone said he rested Jokic partly due to back tightness, though he could’ve returned.

“That man, his in-shape-ability, he plays every single night, bro,” Rivers said. “With the weight of carrying us on his shoulders every night. Every night. And that’s not a burden most guys can take. There’s like three or four guys in the league that can do that.”

Nuggets: Set a new franchise record with their seventh consecutive road victory. … Malone confirmed reports that G Jamal Murray (Left ACL) has begun practicing with G-League Grand Rapids, but said his return to play is not imminent. Murray suffered the injury last April. … Denver made its first 17 free throws before DeMarcus cousins missed the first of a pair, and finished 20 of 21 from the line.

Wizards: Allowed 120 or more points for the fourth consecutive game and 14th time this season … Are on their longest slide since losing six straight from Jan. 19 to Feb. 1.

Asked before the game if Washington’s Porzingis shared traits with Denver’s Jokic, the NBA’s second-leading rebounder and fifth-leading assist man, Malone was skeptical.

“Other than being big and foreign, I think that’s where the similarities stop,” Malone said.

Nuggets: At Cleveland on Friday night.