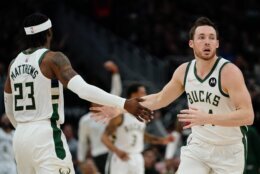 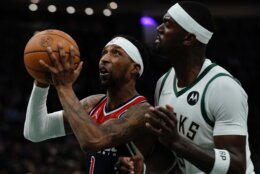 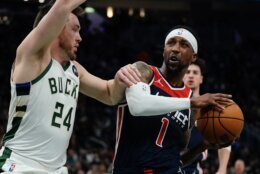 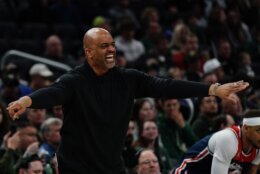 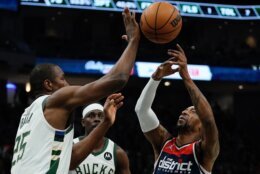 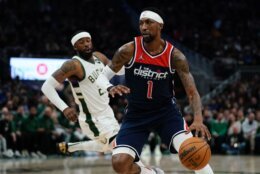 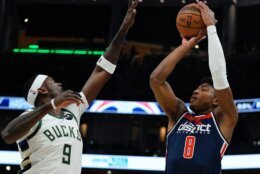 MILWAUKEE (AP) — Even without either of their All-Stars on the floor, the Milwaukee Bucks had enough firepower to beat the slumping Washington Wizards.

Jrue Holiday had 24 points and 10 assists to help the Bucks withstand a late comeback attempt and beat the Wizards 114-102 on Thursday night.

Grayson Allen added 21 points and the Bucks never trailed despite playing without Khris Middleton or two-time MVP Giannis Antetokounmpo. Middleton missed a second straight game with a sore left wrist. Antetokounmpo was out for the second time in three games with a sore right knee.

Bucks coach Mike Budenholzer said before the game he expects Middleton to travel with the team to Memphis and that he’s “hopeful” the three-time All-Star will play Saturday against the Grizzlies. Budenholzer was less certain about Antetokounmpo’s status for Saturday.

“I don’t think it’s anything long-term or anything significant, but we’ll see whether (Antetokounmpo) travels tomorrow and make decisions on the game Saturday as we kind of see how he feels and learn more,” Budenholzer said.

Washington was missing Kyle Kuzma for a third straight game due to right knee tendinitis. The Wizards also continue to play without three-time All-Star Bradley Beal, who underwent season-ending surgery on his left wrist last month.

Ish Smith scored 17 points and Kentavious Caldwell-Pope and Kristaps Porzingis each added 16 for the Wizards.

Pat Connaughton had 16, Brook Lopez 13, Bobby Portis and Serge Ibaka 11 each and George Hill 10 for the Bucks. Portis also had 12 rebounds.

But Caldwell-Pope missed his next free-throw attempt, Allen sank a 3-pointer 24 seconds later and the Wizards wouldn’t threaten again.

“It’s a shame it got so out of hand early that you have to exhaust so much energy to make it a game,” Wizards coach Wes Unseld Jr. said.

Washington has lost eight of nine.

Wizards: Tomas Satoransky received a flagrant foul in the final minute of the third quarter. Allen was heading up the court when he collided with Satoransky’s outstretched arm and fell backward. … Washington has lost its last eight road games. Its last road win was 117-103 at Brooklyn on Feb. 17.

Bucks: Holiday has scored at least 20 points in four of his last five games. … The Bucks led 32-13 at the end of the first quarter. That’s the lowest first-quarter point total the Bucks have allowed all season. … The Bucks have won 10 of their last 11 meetings with the Wizards. They lost 101-94 at Washington on Nov. 7 but have beaten the Wizards two straight times in Milwaukee since. … The Bucks shot 51.9% on Thursday after shooting 61% two nights earlier in a 126-98 victory over the Chicago Bulls.

Bonnie Oleson served as the public address announcer Thursday in honor of Women’s History Month, making her the first woman ever to fill that position at a Bucks home game. Oleson is the regular PA announcer for Wisconsin women’s basketball, women’s volleyball and softball.

Wizards: At Detroit on Friday to close a three-game trip. The Wizards will be looking to sweep all four games in their regular-season series with the Pistons.

Bucks: At Memphis on Saturday to start a three-game trip. The Bucks beat the Grizzlies 126-114 in Milwaukee on Jan. 19.