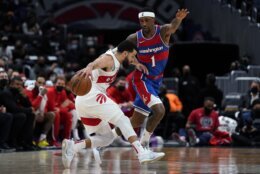 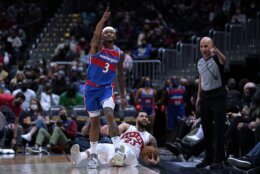 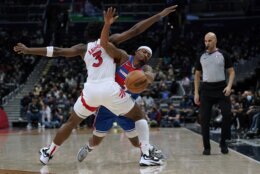 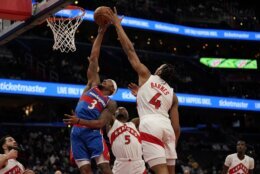 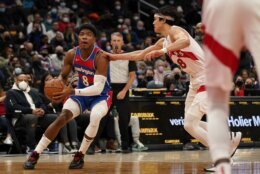 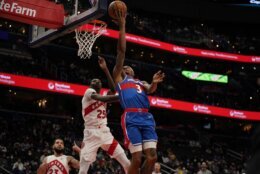 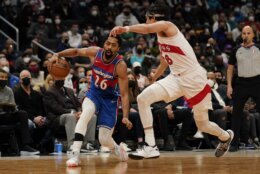 WASHINGTON (AP) — Fred VanVleet hit a tiebreaking 3-pointer with 59 seconds to play, and the Toronto Raptors hung on after blowing an 18-point fourth-quarter lead to beat the Washington Wizards 109-105 on Friday night.

“It was really just finding those easy spots where I could really just get to the rim,” Barnes said.

Bradley Beal led Washington with 25 points. He also had eight assists, but committed nine turnovers, equaling his career high. The Wizards, who began the season 10-3, are 13-20 since.

Beal scored 13 points in the fourth quarter, and the Wizards tied the game at 102 on five straight points from Montrezl Harrell, who converted a three-point play and then dunked.

OG Anunoby scored on a layup and Siakam hit two free throws to seal the game.

Toronto took control with a 22-6 run that gave it a 91-77 lead after three quarters. Barnes, the fourth overall pick in the draft, scored 10 points in the third. The Raptors were up 95-77 early in the fourth quarter.

“Bradley Beal is one of the toughest covers in the NBA,” VanVleet said. “We’ve seen him get hot too many times. We were able to make enough plays late.”

Toronto’s Yuta Watanabe, who didn’t play in the last two games, returned and matched up with Washington’s Rui Hachimura, the second time in NBA history two Japanese players faced each other.

Hachimura had 11 points, and Watanabe didn’t score in six minutes.

Wizards: F Kyle Kuzma was out with neck spasms. … “This has been a week of curveballs,” acting coach Joseph Blair said. “We’ve constantly wondered how we’re going to deal with our depth, and this is a good opportunity to utilize it.”

“He’s always been a special talent,” Beal said. “Tonight, he looked like a star. He was killing us. He was making jump hooks all night. He was breaking us down. He wasn’t doing anything crazy. He kept his game simple.”

VanVleet, who played 39 minutes, was on the court for at least 40 minutes in each of his five previous games. Chris Bosh was the last Raptor to play 40 minutes that many times in a row, doing it in seven straight games from Feb. 4-21, 2007.

In his third game as the Wizards’ acting coach, Blair said he likes the view of the game he gets from standing up. “It’s much easier on my back standing up the entire time,” he said. “You have a better view of everything that’s going on. … I’m a huge basketball fan, so you can’t get a better spot than what I have.”