Kyrie Irving scored 22 of his 30 points in the first half, and the Brooklyn Nets held off the Washington Wizards 119-118 on Wednesday night when Kyle Kuzma and Spencer Dinwiddie missed 3-pointers in the final seconds.
Listen now to WTOP News WTOP.com | Alexa | Google Home | WTOP App | 103.5 FM
(1/4) 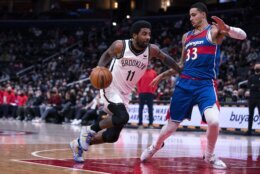 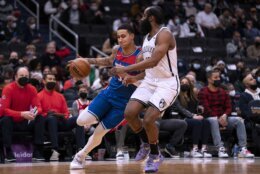 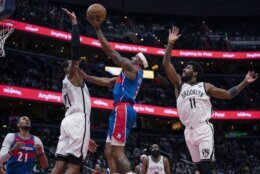 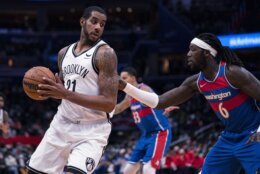 WASHINGTON (AP) — Kyle Kuzma missed a 3-pointer in the final seconds, and he could accept that.

He was less diplomatic about a play earlier in the fourth quarter, when someone on the Brooklyn bench appeared to reach out and deflect a pass that was headed toward Kuzma in the corner.

“AAU basketball. That’s what it looked like,” Kuzma said.

That was one of the more printable things Kuzma said about that bizarre play, but Washington still had plenty of opportunities after that Wednesday night. The Wizards lost to the Nets 119-118 when Kuzma and Spencer Dinwiddie missed 3-pointers in the final seconds.

Washington trailed by as many as 16 points, but a 3-pointer by Kuzma cut the lead to one with 36 seconds left. That set the stage for a wild finish. Kyrie Irving missed a 3 for Brooklyn, but the Wizards couldn’t secure the rebound. Then James Harden had a shot blocked by Montrezl Harrell, giving Washington the ball.

The Wizards didn’t call a timeout, and the ball ended up with Kuzma, who missed from the left wing. Harrell’s offensive rebound gave Dinwiddie a last-ditch shot against his former team, but that was off the mark as well.

Irving scored 22 of his 30 points in the first half for Brooklyn. The star guard made his season debut two weeks earlier. His refusal to get vaccinated against the coronavirus means he can’t play in New York, but he was sharp on this night in Washington.

“Obviously having him on the road has been a big plus for us,” coach Steve Nash said. “Tonight he was brilliant.”

LaMarcus Aldridge added 27 points for the Nets, and Harden had 18. Brooklyn won for only the fifth time in its last 12 games.

Official Ben Taylor told a pool reporter nobody on the crew saw a deflection from the Brooklyn bench on the pass toward Kuzma with 5:45 remaining, which created a steal for the Nets. Joseph Blair, Washington’s acting coach, said he was in “utter disbelief” about the play.

“It’s just an unfortunate situation,” he said. “There’s a couple guys out there that were (expletive) all night. So, got to live with it.”

The Nets are without Kevin Durant because of a left knee injury, and Joe Harris has been out following left ankle surgery. With Irving and Harden, Brooklyn still has plenty of star power.

In fact, the Nets went 16-3 last season when they had Irving and Harden but not Durant. They dropped their first game in that situation this season, Monday against Cleveland.

“I just feel like, even coming into halftime, the Wizards were very comfortable,” Irving said. “It was a good test for us. I felt like we could have maintained the lead a little bit more.”

Blair chose to let things play out at the end, hoping the Wizards could catch Brooklyn in an unsettled situation with no timeout.

“I considered it for sure, but I felt like we had such momentum when we got the rebound going the other way, we had them scrambling,” Blair said.

Dinwiddie scored 11 points. He was acquired by the Wizards this offseason after blossoming into a quality contributor in five seasons with the Nets.

Wizards: Blair coached Washington for a second straight game after coach Wes Unseld Jr. and assistant Pat Delany entered health and safety protocols. … Beal had nine assists, his 13th straight game with at least five. That ties the longest streak of his career.