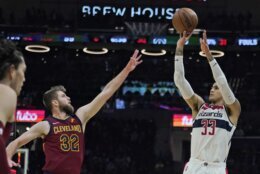 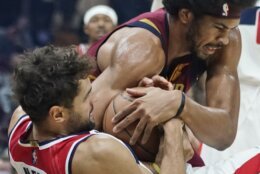 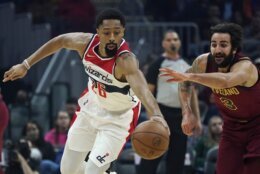 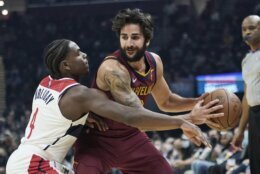 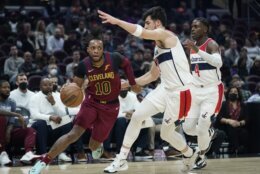 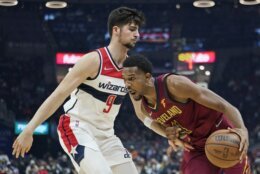 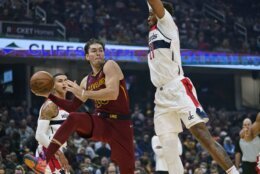 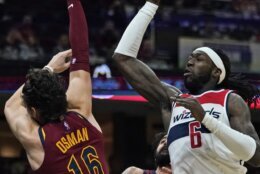 CLEVELAND (AP) — Kyle Kuzma hit a go-ahead 3-pointer with 12 seconds left as the Washington Wizards scored the final five points in a 97-94 victory over the Cleveland Cavaliers on Wednesday night.

Darius Garland missed an open 3 on Cleveland’s subsequent possession, and Corey Kispert made a layup with 0.7 seconds remaining for Washington. Garland’s desperation 70-footer at the buzzer was well off target.

“This is a character win,” Wizards coach Wes Unseld Jr. said. “Our execution late was outstanding and I have all the confidence in Kyle. The kid has been there before and he’s done it before.”

Kuzma scored 12 of his 22 points in the fourth quarter, including two 3-pointers in the final 26 seconds. Montrezl Harrell led the Wizards with 24 points and 11 rebounds. Bradley Beal had 13 points, seven rebounds and seven assists.

Ricky Rubio scored 20 points for the Cavaliers, but missed one of two free throws with 16 seconds left to keep Washington within 94-92. Kuzma took a quick pass from Beal on the other end, giving the Wizards their only lead of the second half.

“We had no business winning that game with the lack of energy we played with in the first 3 1/2 quarters,” said Kuzma, who was 4 of 5 beyond the arc in the fourth. “For us to pick up a win like that, it’s a big moral victory.”

Cleveland was seeking its first five-game winning streak since March 28 to April 5, 2018 — the final season of LeBron James’ second stint with the franchise.

Rookie big man Evan Mobley and Garland scored 19 points apiece, and Jarrett Allen had 13 points and 10 rebounds for the Cavaliers. Cleveland held the largest lead of the game at 80-70 with 10:43 remaining when Garland made a 3-pointer.

“It was the fans’ fault they lost, really,” Kuzma said. “There was a sign that said, ‘LeBron won Kuzma his ring,’ and they were just talking too much. Well, I told those guys, ‘Without LeBron, Cleveland wouldn’t be crap.’”

The Cavaliers played their first game without leading scorer Collin Sexton, who is out indefinitely after tearing cartilage in his left knee Sunday at New York. Isaac Okoro started at shooting guard after missing seven games with a strained left hamstring.

Beal, whose grandmother died Tuesday, missed his first 10 shots and finished 4 of 19 from the field. Fellow guard Spencer Dinwiddie had 11 points, 10 rebounds and six assists for the Wizards, who made all 17 of their free throws.

“Credit to my teammates, they won this game,” Beal said softly. “I was just out there. I’ve never lost anybody close to me, so I don’t know what to do, I don’t know who to go to. My granny, she was like my mom 2.0.”

Mobley scored 11 points in the second quarter, helping Cleveland carry a 49-44 advantage into halftime. Harrell posted 16 points and five boards off the bench.

Wizards coach Wes Unseld Jr. and Cavaliers coach J.B. Bickerstaff grew up together as the sons of NBA royalty in Washington, D.C. Wes Unseld was a legendary player for the franchise, while J.B.’s father Bernie was a longtime coach with the Bullets/Wizards. “We would play around the Capital Centre locker room together,” Unseld said, chuckling. “Our family has been connected to his for decades.”

Wizards: F Rui Hachimura (personal reasons) is working out at the team training facility, but Unseld said there is no timetable for his return. The third-year pro has not appeared in a game this season after being granted a leave of absence. “We want to make sure he’s in a good place,” Unseld said. … F Davis Bertans (left ankle sprain) and C Thomas Bryant (left knee surgery) were inactive.

Cavaliers: F Kevin Love and F Lauri Markkanen remain in the NBA’s health and safety protocols for COVID-19. “When they came in to be tested today, we sat in our cars — socially distant — having a conversation,” Bickerstaff said. “This really is more difficult to deal with than an injury because they literally have to be in isolation.” Love missed his fifth game and Markkanen sat out his fourth.

Wizards: Visit the Orlando Magic on Saturday. The Southeast Division rivals meet for the first time this season. 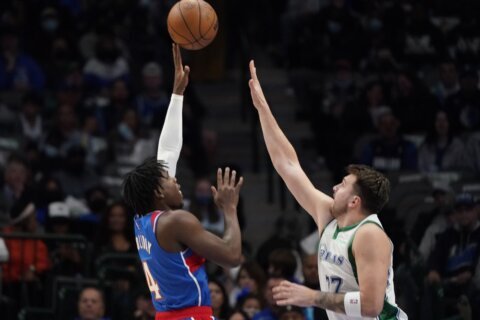 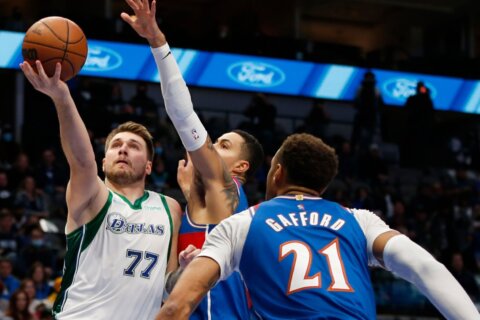 Wizards knock off Mavericks for a notable road victory 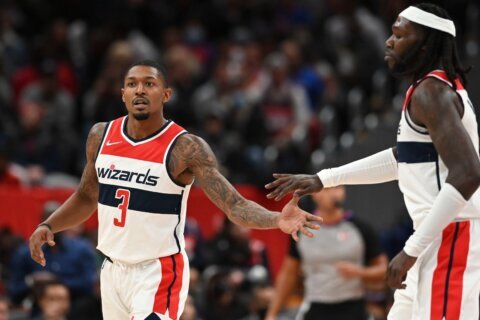