DALLAS (AP) — Bradley Beal scored 26 points, Kyle Kuzma had 10 of his 22 in the fourth quarter and Kentavious Caldwell-Pope scored the clinching four points in the closing seconds in the Washington Wizards’ 120-114 victory over the Dallas Mavericks on Saturday night.

Luka Doncic had 33 points and 10 rebounds for the Mavericks. They lost for only the second time in eight home games.

“We were just being aggressive,” said Beal, who has scored 20 or more points in 12 of 16 games this season. “We were just moving the ball, moving bodies, taking advantage of certain matchups.”

The Wizards (13-7) swept a back-to-back after winning by two points at Oklahoma City on Friday night and moved into a second-place tie with Miami in the Eastern Conference.

They played without starting point guard Spencer Dinwiddie, who has not yet played the second half of a back-to-back this season after having surgery to repair an ACL in January.

After the Mavericks shot 58.3% percent in building a 69-61 halftime, they were held to 34% in the second half. Dallas (10-8) slipped into fifth place in the West, one-half game behind the Los Angeles Clippers.

Wizards coach Wes Unseld Jr. said his team ratcheted up its defense in the second half.

“We did make some adjustments just to kind of give them some different looks at times from possession to possession,” Unseld said. “I think our energy and purpose was better.”

The Wizards’ 120 points were two short of their season high and five shy of the most allowed this season by Dallas, which went into play ranked 11th in the NBA giving up 105.4 points per game.

“We got into a little shootout. That’s what Dallas wants you to do,” Kuzma said. “We did a great job of switching our coverages up a little bit and just dialing into the attention to detail and what we wanted to do in their high pick-and-roll.”

“If you’re going to be in a shootout, you’ve got to make shots,” Mavericks coach Jason Kidd said. “We didn’t make them at the right time. They did.”

“We just didn’t play a very good game,” Doncic said. “We’ve got to be prepared better.”

After Tim Hardaway Jr.’s 3-pointer pulled Dallas to 114-112 with 49.4 seconds left, Caldwell-Pope answered with a 16-foot jump shot. Doncic hit a jumper with 23.6, making the score 116-112, and Caldwell-Pope began to dribble out the clock before being fouled by Maxi Kleber with 10.5 seconds to play.

Kidd defended the strategy of not fouling until Washington ran off about 13 seconds.

“We were trying to get a steal,” he said. “A lot of times teams think you’re going to foul, and they will just hold the ball. You get a jump ball or somehow you get a deflection or steal.”

Caldwell-Pope hit both free throws, and Kuzma added two more with 0.7 seconds left after being fouled in the backcourt by Kristaps Porzingis after Doncic’s 30-foot 3-pointer bounded off the rim.

Trey Burke scored a season-high 14 points off the bench for Dallas. Porzingis and Kleber had 13 each, a season high for Kleber that he reached in the first half.

Burke has averaged double-digit minutes in Dallas’ last five games after appearing in only four of its first 13 games.

“My teammates trust me,” he said. “They know what I can do. In this league, you’ve got to learn how to stay ready.”

Wizards: They snapped a five-game losing streak at American Airlines Center. … Montrezl Harrell hit only his second 3-pointer of the season early in the fourth quarter when forced to heave one up with the shot clock almost expired.

Mavericks: The Mavericks were missing reserve guards Jalen Brunson (injured left foot) and Frank Ntilikina (right calf strain). … Willie Cauley-Stein made his second straight start at center after coming off the bench during Dallas’ first 16 games. He had four points and three rebounds in 10 minutes. 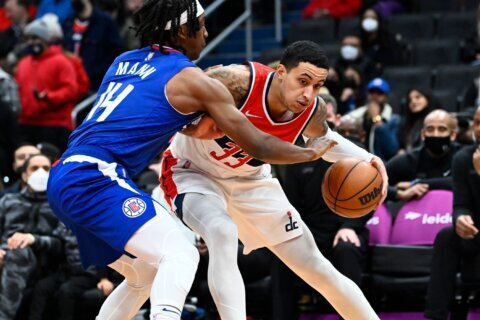