Bradley Beal had 14 of his 28 points in the fourth quarter and overtime Thursday night, and Russell Westbrook had his 34th triple-double of the season in the Washington Wizards' 131-129 win over Toronto that all but eliminated the Raptors from the NBA's play-in tournament.
Listen now to WTOP News WTOP.com | Alexa | Google Home | WTOP App | 103.5 FM
(1/6) 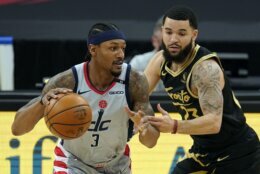 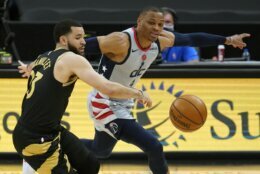 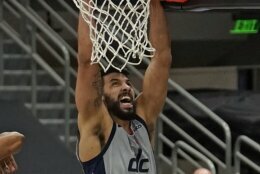 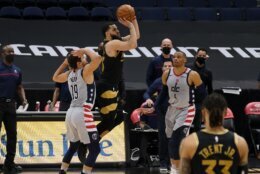 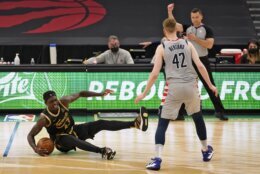 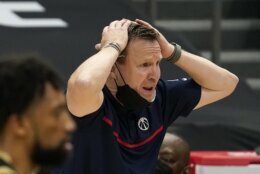 TAMPA, Fla. (AP) — Bradley Beal scored 14 of his 28 points in the fourth quarter and overtime Thursday night, and Russell Westbrook had his 34th triple-double of the season in the Washington Wizards’ 131-129 win over Toronto that all but eliminated the Raptors from the NBA’s play-in tournament.

Pascal Siakam matched his career high with 44 points for the Raptors, who lost for the fifth time in six games and fell four games behind the Wizards for the 10th spot in the Eastern Conference with five left to play. Siakam missed a long 3-pointer at the end of overtime.

“We just needed one of those (shots) to go,” Toronto coach Nick Nurse said, “but it was not to be.”

Beal, who played 45 minutes just a day after the Wizards lost at Milwaukee, spent most of the game trying to escape Toronto’s defensive attention.

“As soon as I walked out of the locker room they had a guy on me,” he said. “It was tough, but it was effective. It kept me out of the game. I had to move without the ball and let my teammates make plays.”

“I think we had him turned in circles most of the night,” Nurse said.

Westbrook had 13 points, 17 rebounds and 17 assists before fouling out with 15.3 seconds left in overtime. The triple-double was the 180th of his career, leaving him one behind Oscar Robertson. It was the sixth triple-double in seven games for Westbrook, who came up one assist short in the other game.

“I didn’t think he played one of his better games,” Wizards coach Scott Brooks said, “but look at the numbers.”

Raul Neto scored a career-high 25 points, and Robin Lopez had six of his season-high 24 points and two big blocks in overtime for the Wizards, who had lost their previous nine games against the Raptors.

“I always come in with the mentality of being aggressive and taking shots when they’re needed. They had two or three guys on Brad the whole game,” said Neto, who made 7 of 11 shots, including five 3-pointers. “It was a key game for us to make the play-in and everybody was locked in.”

Westbrook did not seal his triple-double until a driving layup with 2:22 left in the fourth quarter that left the Wizards one point behind.

Beal scored eight of the next 10 points for Washington, but Fred VanVleet’s 3-pointer with 1.3 seconds left sent the game into overtime.

Three of the Wizards’ last four games have been decided by one or two points.

“To bounce back against a team that’s desperate, playing for their playoff lives — we knew they were going to bring it,” Brooks said.

A putback by Khem Birch followed by Siakam’s 15-foot jumper gave the Raptors a 71-58 lead, the largest of the game, early in the second half.

The Wizards tied it 82-82 with 1:49 left in the third quarter on on a four-point play by Garrison Mathews, but then went more than three minutes without scoring.

Wizards: F Chandler Hutchison, who left Wednesday night’s game early with a bruised left knee, was not cleared to play until just before tip-off. He scored seven points in three minutes in the first quarter.

Raptors: Gary Trent Jr. scored 25 points, playing for the first time after missing six games with a left leg contusion. … F Chris Boucher missed a seventh game with a knee injury. … F OG Anunoby missed a third game with a strained left calf. … G Kyle Lowry sat out his third game of the last four, the exception being Sunday night’s win over the Lakers in which he had 37 points and 11 assists.

Toronto’s Yuta Watanabe and Washington’s Rui Hachimura, who became the first Japanese players to play in the same NBA game on Dec. 14, 2019, never shared the floor this season even though the Raptors and Wizards met three times.

Watanabe missed the Feb. 10 game with a sprained left ankle, and Hachimura did not play on April 5 because of a sore shoulder. Both sat out Thursday night — Watanabe with a sore ankle and Hachimura with an illness.

Wizards: At Indiana on Saturday night. 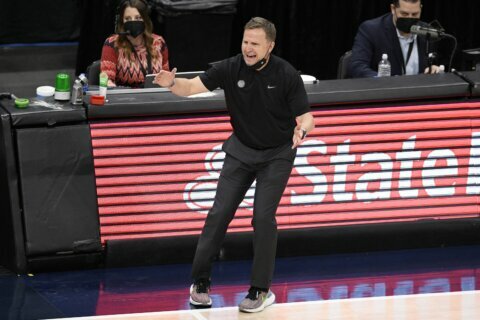