Russell Westbrook got his first triple-double since passing Oscar Robertson and becoming the NBA’s career leader earlier in the week, lifting Washington past the Cleveland Cavaliers 120-105 on Friday night and helping the Wizards clinch a spot in the play-in tournament.
Listen now to WTOP News WTOP.com | Alexa | Google Home | WTOP App | 103.5 FM
(1/8) 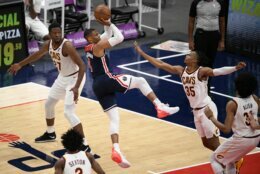 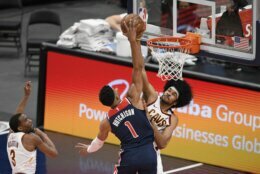 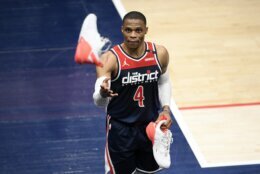 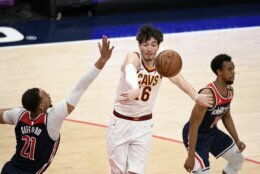 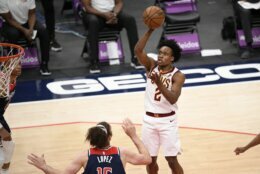 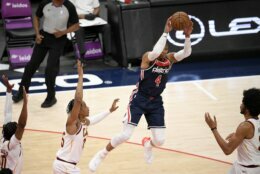 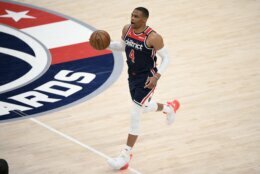 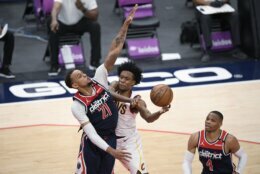 WASHINGTON (AP) — Russell Westbrook got his first triple-double since passing Oscar Robertson and becoming the NBA’s career leader earlier in the week, lifting Washington past the Cleveland Cavaliers 120-105 on Friday night and helping the Wizards clinch a spot in the play-in tournament.

Westbrook had 21 points, 17 assists and 12 rebounds for his 183rd career triple-double and league-leading 37th this season. Westbrook joined Hall of Famers John Stockton and Isiah Thomas as the only players with at least 15 assists in seven consecutive games in NBA history.

“I’ve been in the league a long time and when you’re 15 games under .500 you’re thinking, ‘Where are we going on vacation?’” coach Scott Brooks said.

Westbrook chimed in with a different take on the Wizards’ postseason possibilities: “I never doubted it, honestly.”

Washington clinched a spot in the NBA’s new play-in tournament for the playoffs involving the Nos. 7-10 seeds in each conference. On Friday night, the league announced that both Eastern Conference play-in games will be played next Tuesday with the No. 7 seed hosting No. 8 in Game 1 and the No. 9 seed hosting No. 10 in Game 2. The loser of the first game will host the winner of the second game on May 20.

Washington, currently the No. 10 seed, improved to 33-38 after snapping a two-game losing streak and is within a half-game of Indiana and Charlotte, both at 33-37. Washington can still finish anywhere between seed Nos. 8 and 10. Boston has clinched the No. 7 seed.

Collin Sexton had 26 points and Jarrett Allen had 18 points and 14 rebounds for Cleveland, which has lost seven straight on the road. Isaac Okoro had 17 points and Cedi Osman added 16.

Washington took a 58-56 advantage into halftime in a back-and-forth affair that featured eight ties and 12 lead changes. The second half was all Wizards as they never trailed and led by as many as 19.

“Russ was extremely aggressive in getting in the paint,” Cavaliers coach J.B. Bickerstaff said.

Washington scored 56 points in the paint and attempted 37 free throws, compared to just 21 for Cleveland. Reserve big men Anthony Gill and Daniel Gafford each had 12 as Washington outscored Cleveland’s bench 58-16.

In his first home game since becoming the triple-double leader, Westbrook was presented with a framed No. 182 Wizards jersey by owner Ted Leonsis. A video tribute to Westbrook played before the game in the arena that included remarks from Robertson and the three other players in the Top 5 for career triple-doubles (Magic Johnson, Jason Kidd, LeBron James). NBA commissioner Adam Silver and others also spoke.

After the game, Brooks joked that he is a bit worried about the Wizards facilities if they keep up their celebrating rituals with Westbrook.

“They threw a bunch of water on Russell again,” Brooks said about what has become a postgame staple.

“I said, ‘Hey, we can’t keep drenching Russell every time he breaks his own record. We’re going to have mold issues in the locker room.’”

Cavaliers: Kevin Love (right calf strain management) missed his 46th game of the season. … G Darius Garland returned after missing seven games with a sprained left ankle and scored three points in 12 minutes. … Cleveland shot 57.1 % (12 of 21) in the first quarter and led 33-31. … Osman was back in the starting lineup after missing three games with a sprained left ankle. … Bickerstaff picked up a technical in the fourth.

Wizards: Bradley Beal missed his third straight game with a left hamstring strain. Beal, the NBA’s second-leading scorer averaging 31.4 points, did participate in some pregame warmups. Brooks said Beal is getting better every day, but did not know if he would be available Sunday. … G Raul Neto was out with left hamstring tightness. … Westbrook broke a tie with Gary Payton and is now the 39th-leading scorer in NBA history with 21,834 points. … F Chandler Hutchinson started his first game of the season.

Cavaliers: Wrap up their season at Brooklyn on Sunday.

Wizards: Host Charlotte on Sunday in a game that may have play-in seeding implications.