Russell Westbrook took over the game in overtime for the Washington Wizards, scoring 10 of their 12 points in the extra period and providing a pass that Bradley Beal turned into the other basket.
Listen now to WTOP News WTOP.com | Alexa | Google Home | WTOP App | 103.5 FM
(1/5) 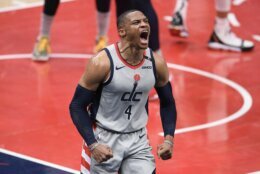 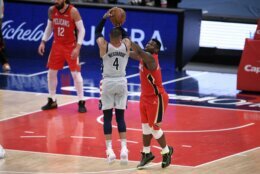 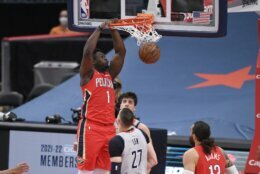 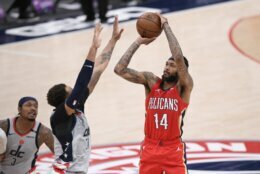 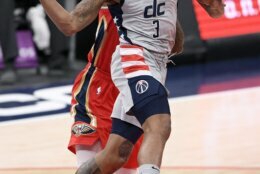 WASHINGTON (AP) — Russell Westbrook took over the game in overtime for the Washington Wizards, scoring 10 of their 12 points in the extra period and providing a pass that Bradley Beal turned into the other basket.

If the Wizards are going to continue their turnaround from a terrible start and a COVID-19 outbreak to reach the play-in portion of the NBA postseason, it’s going to take more such displays by their dynamic guard duo.

Westbrook made a pair of free throws to break a tie with just one second left in OT after he was fouled by Zion Williamson and combined with Beal to score 66 points, leading the Wizards past the New Orleans Pelicans 117-115 on Friday night.

“He’s been playing great since All-Star break. … If he’s healthy, he loves what he’s able to do on the floor,” Beal said about Westbrook. “His main thing is trying to win games, no matter what it looks like.”

This one looked pretty good: Westbrook accumulated 36 points, 15 rebounds and nine assists, just shy of what would have been a seventh consecutive triple-double.

“As the game goes on, I always try to figure out how I can impact a game,” Westbrook said. “This particular time, my job was to score.”

Beal, the NBA’s leading scorer, added 30 points despite going 0 for 9 on 3-point attempts, helping Washington come back to collect its third victory in a row and fifth in the past six games.

Asked about his trouble on 3s, Beal replied: “You ever heard the Monica song, ‘Just One of Dem Days’? That’s all it was.”

Brandon Ingram scored 34 for New Orleans, and Williamson added 21 but was in foul trouble throughout. He picked up his sixth while guarding Westbrook away from the basket.

That came right after Williamson turned the ball over at the offensive end.

“Last thing I want to do is fail my teammates. In the moment, that’s what it felt like. … It felt like failure,” Williamson said. “You learn from games like this so you can be more prepared the next time.”

Neither scored again in regulation.

That included Lonzo Ball’s missed corner 3 — making him 0 for 7 from beyond the arc — with about 20 seconds to go, and Beal’s straightaway 3 off the front of the rim at the buzzer ending the fourth quarter.

“We gutted a win out,” Wizards coach Scott Brooks said.

He and Beal both acknowledged they’re tracking results around the league as the regular season winds down.

There’s a month left, and Washington has 17 games remaining.

The Wizards entered Friday 12th in the Eastern Conference and their 21-33 record put them one game behind the 10th-place Chicago Bulls. The Pelicans came in at 25-30, two games behind San Antonio for 10th in the West.

“We can’t dwell on this loss,” Williamson said.

Pelicans: C Jaxson Hayes did not play in the second half after being ruled out with back spasms. … Ball, back in the lineup after missing four games with a sore left hip flexor, had four points. … Coach Stan Van Gundy acknowledged the decision to put Ball back in and remove Naji Marshall (16 points, 11 rebounds) with 4 1/2 minutes left in regulation was “worth a question, and probably a criticism.”

Wizards: C Daniel Gafford had a season-best 18 points, along with four blocks. … Davis Bertans missed the game for personal reasons.

Pelicans: At Madison Square Garden on Sunday, facing the Knicks for the second time in five days. 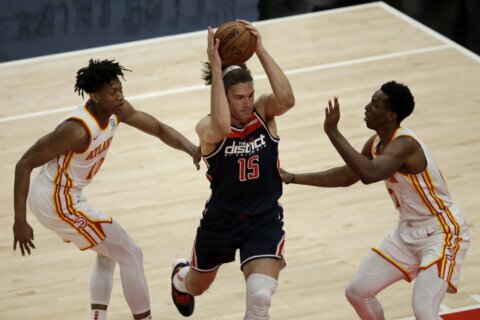 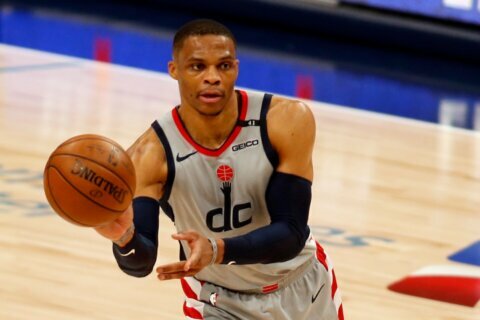