Russell Westbrook posted his 31st triple-double of the season with 15 points, 12 rebounds and 11 assists, and the Washington Wizards continued their postseason push with a 122-93 rout of the Cleveland Cavaliers on Friday night.
Listen now to WTOP News WTOP.com | Alexa | Google Home | WTOP App | 103.5 FM
(1/8) 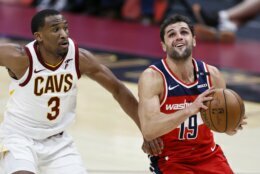 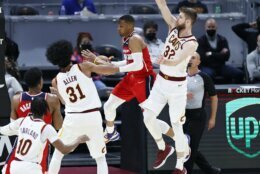 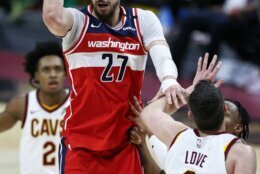 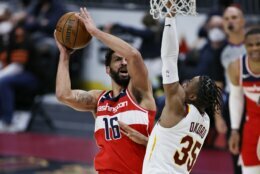 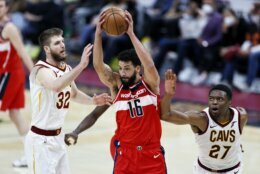 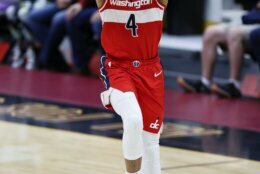 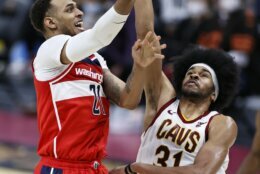 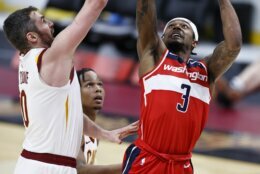 CLEVELAND (AP) — Russell Westbrook posted his 31st triple-double of the season with 15 points, 12 rebounds and 11 assists, and the Washington Wizards continued their postseason push with a 122-93 rout of the Cleveland Cavaliers on Friday night.

It was Westbrook’s 177th career triple-double, moving him within four of Oscar Robertson’s NBA record. He also tied Wilt Chamberlain (1967-1968) for the fourth-most triple-doubles in a season, a list that Westbrook leads with 42 in 2016-2017.

“When you get mentioned with great names like Oscar and you get complimented by him like I’ve been, it’s truly an honor and something you don’t take for granted,” Westbrook said. “I’m just grateful to be in a conversation with my name connected to his.”

Westbrook is on pace to average a triple-double for the fourth time, currently at 21.6 points, 11.2 rebounds and 11.0 assists per game. He accomplished the feat three times with Oklahoma City, most recently two seasons ago.

“I’m hoping Russell gets the record because it’s something that you wouldn’t think would be possible for a 6-foot-3 guard,” Wizards coach Scott Brooks said. “He has a tenacity to compete that doesn’t change from day to day.

“It’s been awesome to see how he leads us on the court, off the court, in the hotel and on the bus. He has just been terrific.”

Bradley Beal scored 19 points on 8-for-24 shooting, and Raul Neto had 17 points for Washington, which strengthened its hold on the final play-in tournament spot in the East. The Wizards are 12-2 since falling a season-low 15 games below .500 on April 5.

Golden State’s Stephen Curry, whose team did not play, reclaimed the league scoring lead over Beal 31.3 points per game to 31.1.

Collin Sexton scored 22 points but had a career-high eight turnovers for Cleveland in his return from a three-game absence with a concussion. Cedi Osman had 14 points and Darius Garland added 12 before leaving with a left ankle injury in the third quarter.

Kevin Love did not attempt a shot and went scoreless in 22 minutes for the Cavaliers, who have lost five straight overall and seven of their last eight at home. Love threw an on-court tantrum Monday against the Raptors in Tampa, Florida, and publicly apologized for it two days later.

“Tonight was different, and we need Kevin to take shots because he’s a big part of our offense,” Cleveland coach J.B. Bickerstaff said. “Of course, we’d like to find a way to get him in the game offensively. We need to get him involved early.”

Washington blew the game open in the third quarter, outscoring Cleveland 33-16 to extend its lead to 89-77. A 3-pointer by Garrison Mathews late in the fourth gave them their largest advantage at 117-84.

The Wizards outscored the Cavaliers by 34 points in the 25 minutes played by Ish Smith, who had 11 points and four assists. Daniel Gafford chipped in 13 points and seven boards.

Wizards: Brooks won his 178th game with Washington, tying Randy Wittman for fifth place in franchise history. Dick Motta is fourth with 185 victories … C Robin Lopez appeared in his team-high 62nd game, only sitting out one. He did not play against San Antonio on April 26 because of a sprained left ankle. … C Thomas Bryant (left ACL tear) and F Deni Avdija (right ankle fracture) will miss the rest of the season.

The Wizards’ path to the playoffs includes six road games in their next seven contests. Their second-half schedule is compressed tighter than most as a result of their Jan. 13-22 shutdown for COVID-19. “Everyone in the NBA is tired at this point of the season, so that’s not an excuse,” Brooks said. “But making up those six games has led to extra travel and fewer days off, so it’s something we’ve had to adjust to.”

Wizards: Visit Dallas on Saturday. Washington is 18-11 against the West, but lost to the Mavericks 109-87 on April 3 at Capital One Arena.