DENVER (AP) — Bradley Beal had a sinking feeling his 33-point effort was all for naught Thursday night when he found himself as Washington’s sole defender on Denver’s 4-on-1 fast break in the final seconds with the Wizards clinging to a two-point lead.

Jamal Murray was racing downcourt and Michael Porter Jr. looked as though he was heading toward the hoop for an easy bucket.

“My initial thought was they’ll probably get a damn layup and we’re going into overtime,” Beal said. “That was honestly my initial thought as I was running toward Murray and I just knew he was going to throw a lob to Porter Jr. for an easy layup or a dunk.

“Then, I saw him kind of slow down at the 3-point line and I was like, ‘Well, shoot. He’s trying to send us home. So, let me try to at least contest and force them to take the layup.”

As Beal went to deny Murray the 3-pointer, however, Porter headed toward the right corner, giving Denver four players straddling the arc and nobody in the paint.

Murray bounced a pass to Facundo Campazzo, who clanked a hurried 3 off the rim at the buzzer, leaving the Wizards to celebrate their 112-110 escape over the Nuggets.

“I’m happy as hell, I can tell you that,” Beal said after Washington’s sixth win in seven games.

Murray had already hit six 3s and scored 34 points. But he’d end up regretting bypassing the 3-pointer and ruing the bad pass he skipped to Campazzo.

He was thrown off when Porter headed not to the basket but to the corner.

“Come on, guys. Lock in! We’re playing basketball. We’re 4-on-1, somebody should go to the rim,” Murray fumed. “I thought Michael was going to the rim. … He might have thought I was shooting it and I should have shot it. I gave (Campazzo) a really bad pass. And I didn’t run the clock, either.”

When Campazzo’s off-target 3 clanged off the rim, the Wizards had their second two-point win over Denver in eight days.

Murray blamed himself for this one.

“If I stop for the 3, I’ve got to shoot it,” he said. “And if Mike’s running the lane, he’s got to go to the rim, especially when there’s other guys behind him. So, I guess it’s just a tough play where we didn’t know what we were doing. We’ve just got to score.”

After his interview with reporters on Zoom ended, Murray posted a still shot on his Twitter account showing him, Porter, Campazzo and Monte Morris all setting up behind the 3-point line with 2.9 seconds left.

“My fault Nuggets nation.. on to the next one.. STICK WITH US!!” he wrote.

Rui Hachimura added 20 points for the Wizards, who swept the season series with the Nuggets and completed a 3-1 trip out West.

Denver got 24 points from Jokic and 18 from Porter.

Wizards: Washington had its five-game winning streak snapped by the Clippers on Tuesday night but has been playing much better of late, including a 130-128 win over Denver last week in which Davis Bertans set career highs with nine 3s and 35 points. Bertans didn’t play in the rematch because of a sore knee.

Nuggets: Denver was still without Gary Harris (left adductor), P.J. Dozier (right hamstring), Paul Millsap (left knee strain) and JaMychal Green (left shoulder). With the team’s top two power forwards sidelined, Porter started at that spot again. … The Nuggets started out 4 for 17 from the field, including 1 for 12 by players other than Jokic.

The Nuggets committed 18 turnovers two days after turning the ball over just once in a victory over Portland. The Wizards turned those takeaways into 23 points and committed just 11 turnovers themselves, which led to 15 points for Denver.

Wizards: On Saturday they host the Minnesota Timberwolves, who have lost six straight since beating Toronto on Valentine’s Day.

Nuggets: At Oklahoma City on Saturday. The Thunder will be playing the second night of a back-to-back. 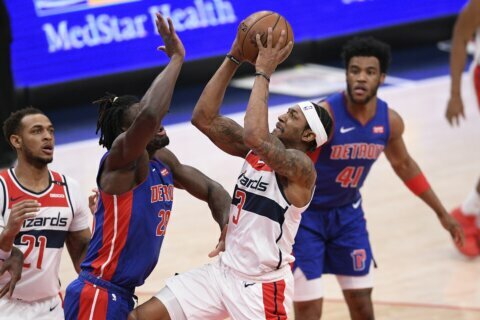 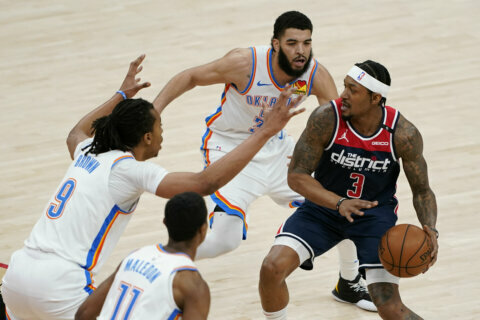