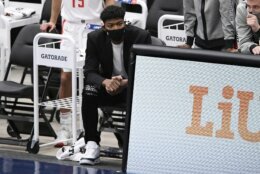 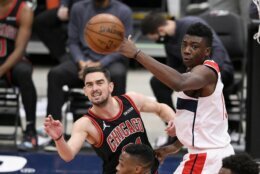 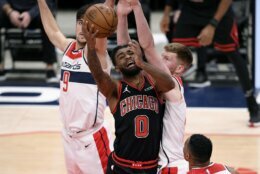 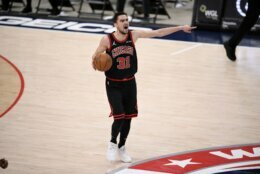 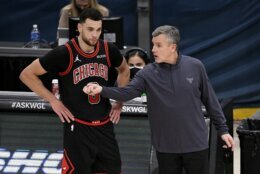 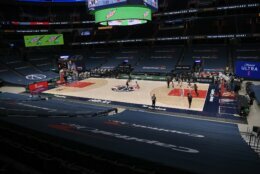 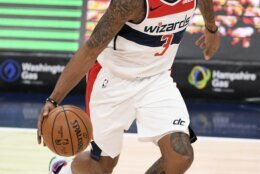 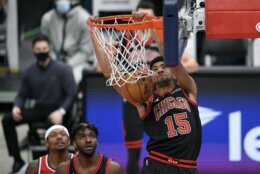 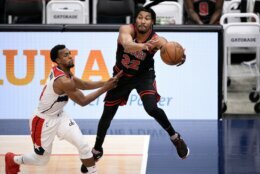 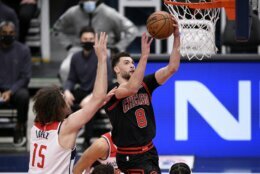 WASHINGTON (AP) — Zach LaVine scored 23 points, including nine straight in the third quarter, and Coby White added 18 to lead the Chicago Bulls to their first victory of the season, 115-107 over the winless Washington Wizards on Tuesday night.

Chicago improved to 1-4 while Washington fell to 0-4, its worst start since beginning the 2012-13 season with 12 straight losses.

Russell Westbrook, who sat out Sunday’s game, had his third straight triple-double with 21 points, 15 rebounds and 11 assists for Washington.

“The only way we can get out of this as a team is if we stick together,” Bertans said. “Being negative about the four losses isn’t going to help us come back and win games.”

Chicago players presented a game ball to coach Billy Donovan, who earned his first victory with the Bulls. He coached Oklahoma City for the previous five seasons.

“I thought it was important that we showed those two guys a crowd,” Donovan said about Beal and Westbrook. “Especially Russell in transition, if he sees creases and seams he takes advantage of it.”

Donovan coached Beal at Florida and Westbrook with the Oklahoma City Thunder.

Donovan said Beal was a pre-med major during his one year in college, and wavered before deciding to leave school after a single season.

“He obviously made the right decision,” Donovan said.

In his four years coaching Westbrook, Donovan said he was never disappointed.

“When you have your best player when you walk in there as a coach, and you’re never worried about whether this guy is going to show up and compete, it’s an incredible luxury,” Donovan explained.

Washington coach Scott Brooks preceded Donovan as coach of the Thunder, and said Westbrook is teaching important lessons with the Wizards.

“We haven’t won a game,” Brooks said. “But he’s teaching these young players how important our job is and that’s priceless.”

Bulls: F Thaddeus Young, who missed the first three games of the season with an infection of his lower left leg, said after Tuesday’s shootaround he was ready to play. But he sat out again. … The Bulls avoided their first 0-4 start since 2007-08. … F Lauri Makkenen reinjured his left calf and played just 19 minutes. “I wanted to be available and be there for my teammates, but it’s frustrating,” he said.

Wizards: Exercised the fourth-year option on G/F Troy Brown Jr. and the third-year option on F Rui Hachimura. … Brooks said Hachimura, yet to play this season due to an eye injury, is nearing a return. He played 3-on-3 on Tuesday and could play 5-on-5 on Wednesday. … G Garrison Mathews, a two-way player, was active for the first time this season.

The Bulls and Wizards play again in Washington on Thursday afternoon.