Just past noon on Election Day, after casting her vote where the NBA’s Wizards and NHL’s Capitals play, Mary Pittman exited through one of the arena’s glass doors. Perched on the 77-year-old retiree’s walker: a stars-and-stripes hat touting the basketball team, autographed on the brim in fresh black ink.
Listen now to WTOP News WTOP.com | Alexa | Google Home | WTOP App | 103.5 FM

WASHINGTON (AP) — Just past noon on Election Day, after casting her vote where the NBA’s Wizards and NHL’s Capitals play, Mary Pittman exited through one of the arena’s glass doors. Perched on the 77-year-old retiree’s walker: a stars-and-stripes hat touting the basketball team, autographed on the brim in fresh black ink.

“No line,” Pittman said about Tuesday’s balloting. “No waiting. No confusion. No fuss.”

At a time when athletes are embracing activism like never before, refusing to heed the unfounded admonition framed two years ago by one TV talking head as “shut up and dribble,” there was vivid symbolism in the wide use of team arenas and stadiums as voter registration and polling sites.

If the United States’ fields of play once were walled off from politics — Colin Kaepernick, whose 33rd birthday happened to be Tuesday, saw his sideline kneeling to call attention to police brutality and systemic racism contribute to his status as a “former NFL quarterback” — they have become fertile ground for those sorts of statements in 2020.

“Athletes, like anyone, are entitled to their opinion,” Pittman said. “But I don’t have to agree with it.”

“I’ve loved and respected how we have … been able to speak out on certain things that was, in the past, uncomfortable. It says a lot. Says how far we came as athletes. And we’re going to keep growing, keep evolving,” Smith said.

“Sports and politics — usually people keep to one side,” he said. “Now they’re intertwining.”

Indeed, that intersection never has been as pronounced as now, whether manifested in the messages on courts and jerseys during the NBA season. Or walkouts staged by that league’s players and followed by others from tennis to hockey. Or the unfurling of a black ribbon held by the Washington Nationals and New York Yankees before they knelt in unison at the first game of the Major League Baseball season.

“When I played, players and coaches were never — maybe not never; rarely — asked about politics and voting,” Golden State Warriors coach Steve Kerr said. “But the times are different. Our country is in turmoil, and everybody plays a role.”

Tuesday, meanwhile, was that rare day in the U.S. without scoreboards.

No competition. No practices. Nothing (other than a rather ho-hum NFL trade deadline).

Some of that was courtesy of the coronavirus pandemic — the 2020-21 NBA and NHL seasons normally would be in full swing, but the delayed finishes of their previous seasons pushed back the upcoming ones — and some of it was because of Election Day. The NFL and Major League Soccer ordered everyone to take a day off. Similarly, the NCAA barred every top-division college team from playing or training.

Yet sports’ presence was felt.

Athletes can “encourage people to listen to one another, to unite and come together, more so than divide,” Miami Dolphins coach Brian Flores said. “I think that’s important to a lot of the players. I think they want better for this world.”

There were wide-reaching, nonpartisan “get out the vote” efforts endorsed by players, teams and leagues themselves, including Los Angeles Lakers superstar LeBron James’ “More Than a Vote” group, formed not long after the the police killings of George Floyd in Minneapolis and Breona Taylor in Louisville.

There also were athletes — and ex-athletes — who made it a point to let folks know which candidate, party or positions they support: endorsements of President Donald Trump tweeted by golf’s Jack Nicklaus and football’s Brett Favre; rally speeches in support of former Vice President Joe Biden by Philadelphia 76ers coach Doc Rivers; phone calls boosting Biden by Olympic figure skating medalist Michelle Kwan. In August, two-time NBA MVP Stephen Curry appeared with his wife, Ayesha, and their two daughters in a video endorsing Biden during the Democratic National Convention.

It’s an environment that led Wizards shooting guard Bradley Beal, Tennessee Titans linebacker Will Compton, NASCAR driver Bubba Wallace and others to proudly note they were voting for the first time. And led WNBA players Tamika Catchings and Chiney Ogwumike to sign up to be poll workers. And led Oklahoma City Thunder point guard Chris Paul to join nearly 2,500 people on a march to a voting site in North Carolina. And led safety Rodney McLeod and some Eagles teammates to encourage voter turnout by riding a double-decker bus around Philadelphia.

Part of that enthusiasm, to be sure, is a result of stoking by Trump, who loudly decried peaceful protests by Kaepernick and other players and prompted more athletes and teams than in the past to skip the traditional champions’ White House visits.

“Certainly, there are fans out there who provide pushback: ‘All we want to do is watch sports. We don’t want to be involved in politics,’” said Len Elmore, a former NBA player who teaches a Columbia University class about athlete activism and social justice. “But those are the same people who will push back on the notion of racism existing and permeating all of our lives.”

In Cleveland, Ian Crawford — who wore an MLB Indians hat while voting at the NBA Cavaliers arena — said he’s all for athletes expressing their thoughts on big issues.

“I don’t necessarily know if, ‘Oh, LeBron is saying that, so I’m just going to do whatever LeBron says to do,’ but it brings out other opinions and it kind of makes you think a little more about the situation,” Crawford said. “People who are kind of curmudgeonly and (the) ‘stick to sports’ kind of thing is ridiculous.”

Wallace, the only full-time NASCAR driver who is Black, found himself in a Twitter back-and-forth with Trump in July, which he referred to Tuesday as “being thrown into the political fire” — and connected to his decision to vote.

“You can’t just do it once,” he said. “It’s definitely something that will keep going on. And I keep encouraging other athletes to keep exercising their right, using their platforms, using their voices.”

As Warriors guard Damion Lee put it: “These are the times where everyone’s ready for it. It’s not a moment; it’s a movement.” 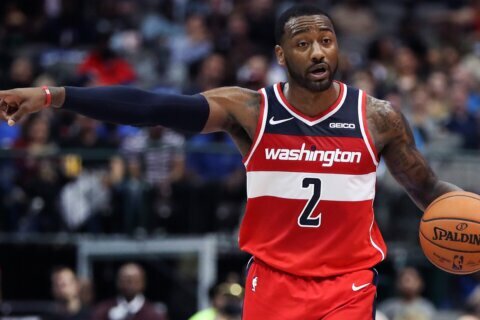