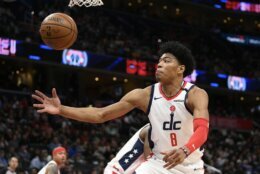 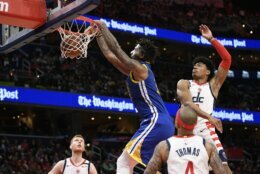 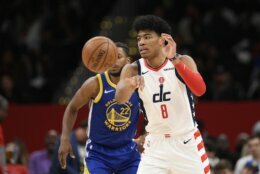 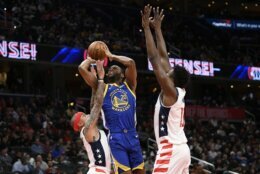 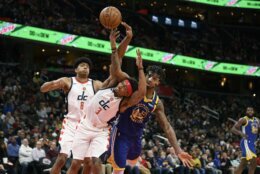 It was the second straight win for the NBA-worst Warriors (12-39), with both coming on the road. They lost 15 of their previous 17.

Golden State is playing without Stephen Curry and Klay Thompson due to long-term injuries. But Green said the victory at Washington was a positive sign.

“That’s definitely a step in the right direction,” Green said. “A month or ago, we would have lost that game when they cut it to five.”

“We are not turning it over and playing with really good pace,” coach Steve Kerr said. “I think Draymond sets a good tone for us when he pushes the ball. Made or miss, when we get into our offense quickly, that’s a big help.”

Beal led Washington with 43 points in his seventh straight game with at least 30 points, the third-longest such streak in team history. Davis Bertans had 19 points.

Golden State grabbed control with a 15-0 run spanning halftime that made it 79-63 with 9:56 to play in the third quarter.

“We did not come out to play with the right mindset,” Washington coach Scott Brooks said. “I don’t know what we were thinking, but we weren’t thinking the right things.”

Beal went 15 for 30 from the field while passing the injured John Wall for third on Washington’s career scoring list. Beal also went 10 for 10 at the line in his fifth straight game with at least 10 converted foul shots, tying him with Gilbert Arenas for the longest run in team history.

“They just outplayed us in every aspect of the game,” Beal said.

Warriors: G D’Angelo Russell was out with a bruised right quadriceps. Russell has been a rumored trade target in advance of Thursday’s deadline. “It affects everyone,” Kerr said. “It’s no fun having your name mentioned in trade talks. I can speak from experience. It’s sort of a jarring thing when you read about yourself and the possibility that you might be moved.” … Golden State beat Washington for the sixth straight time. … F Eric Paschall had 14 points and 10 rebounds.

Rui Hachimura scored 11 points in almost 26 minutes after missing 23 games with a groin injury. He was expected to be limited to 20 minutes in his first game since Dec. 14.

“I told them I was fine when I started playing,” Hachimura said. “I can play more.”

Golden State had 31 assists, six above their average for the season. Center Marquese Chriss likes how the team’s been playing lately.

“It’s contagious when everybody starts passing around the ball and swinging it around,” Chriss said. “Everybody is getting a touch. Everybody is playing for each other. We are playing through each other and just giving each other opportunities.”