Khris Middleton scored a career-high 51 points in the absence of injured teammate Giannis Antetokounmpo, leading the Milwaukee Bucks to a 151-131 victory over the Washington Wizards.
(1/6) 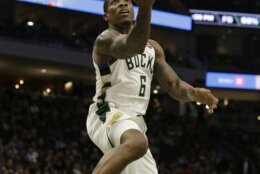 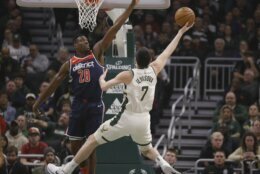 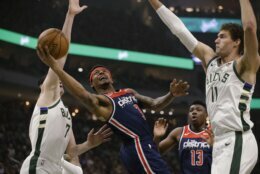 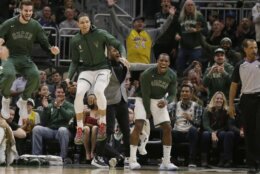 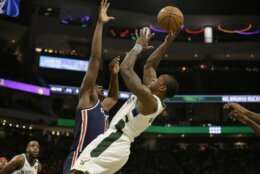 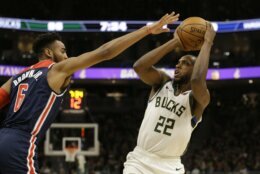 Middleton scored a career-high 51 points, leading the Milwaukee Bucks to a 151-131 victory over the Washington Wizards on Tuesday night.

Middleton, hoping to be chosen an All-Star reserve for the second straight year on Thursday, helped the Bucks hold off a determined second-half Wizards rally. Middleton also had 10 rebounds and six assists while hitting 16 of 26 shots and 7 of 10 3-pointers, topping his previous career best of 43 points.

He said he was thinking a lot the past few days about Bryant, who was killed along with his 13-year-old daughter Gianna and seven others in a helicopter crash Sunday.

“Kobe was one of my favorite players growing up besides (Michael) Jordan,” Middleton said. “I took a lot from his game. Everybody says Mamba mentality. To go out there and put on that type of performance, I definitely can dedicate that game to him as a thank you for what he did for the game.”

Milwaukee (41-6) scored a franchise-record 88 points in the first half, finished with its highest total of the season and won its ninth straight game despite the absence of star Giannis Antetokounmpo, who sat out with a right shoulder injury.

Bradley Beal led the Wizards (15-31) with 47 points, his second straight 40-point game and sixth of the season.

Milwaukee led from wire to wire and by as many as 32 points but the Wizards rallied in the third quarter, putting up 41 points to cut their deficit to 117-104 entering the fourth. Washington got within seven points in the final period but could not get closer.

Eric Bledsoe had 34 points, 10 assists and six rebounds for the Bucks. Donte DiVincenzo added 16 points and a pair of late 3-pointers to clinch the victory.

Middleton responded with 13 points in the fourth quarter as he scored the most points by a Bucks player this season. He pounded home a dunk to reach 51 points and give the Bucks a 13-point lead late in the final quarter.

“He’s an All-Star,” DiVincenzo said. “He did it last year. He’s doing it again this year. When we’re struggling we just go to Khris. We have that confidence in him. He knows not to force it. He’s an amazing player. He knows he can pick his spots and get others involved.”

The previous high by a Bucks player this season came when Antetokounmpo had 50 points on Nov. 25 against Utah.

The Bucks came out firing from deep, hitting eight of their first nine attempts from 3-point range. Milwaukee converted 14 of 22 shots in the first quarter on the way to a 42-28 lead.

And they kept going in the second. Middleton hit his fourth 3-pointer of the half to give the Bucks a 69-43 lead with 5:46 left. Middleton nailed two more 3s to finish the half 6 for 6 from 3-point range and with 28 points.

“He got in a rhythm pretty early,” Bucks coach Mike Budenholzer said. “It was coming off his hand well. He had a good pop, a good bounce. I think everybody was feeding off him, celebrating him because he’s such a good player and such a good teammate.”

The previous franchise mark for points in a half was 87 set against New Orleans on March 14, 1979.

The Bucks organization opened the night with 24 seconds of silence to honor Bryant, marked by a countdown on the 24-second clock above both baskets. The game started with a 24-second violation taken by the Bucks, with players on both benches standing and the crowd standing and applauding. The Wizards then took an 8-second violation as the teams honored Bryant, who wore jersey Nos. 24 and 8 in his 20-year career with the Lakers.

Bucks co-owner Marc Lasry said he believes the team should have at least three All-Stars when reserves are named Thursday for the Feb. 16 game in Chicago.

Middleton seems a likely pick but Lasry made the case for point guard Eric Bledsoe and center Brook Lopez as well. The Eastern Conference coaches pick the All-Star reserves. Antetokounmpo was chosen as a starter and team captain.

“Khris absolutely deserves to be an All-Star,” Lasry said. “It gets tiring after a while. Everybody talks about how you should be a team and you should do things together. Here we are the best team. We’re doing everything the right way. The Warriors had four All-Stars. When the Hawks were leading (the East), they had four All-Stars. The fact that we have to talk about Middleton and Bledsoe should be reserves. We should have Middleton, Bledsoe and Brook.”

Wizards: Coach Scott Brooks said he thinks the Bucks are better than they were last year, and he credits their painful six-game Eastern Conference finals loss to Toronto for that. “They’ve got the championship hunger and they’re ready,” Brooks said. “They obviously had a tough playoff series loss last year. Sometimes that helps. You have that chip; you have that scar that needs to be there. Not too many teams come together and win a championship the first go-round. They have everything. They’re built to win a championship this year.” … Former Bucks player Gary Payton II came off the bench for the Wizards. Guard Jordan McRae (sprained right ankle) was not with the team after averaging 15.9 points in the past 18 games.

Bucks: Antetokounmpo sat out with right shoulder soreness, but Budenholzer did not think it would be an injury to keep him out of the lineup too long. “It’s been bothering him for a few days actually,” Budenholzer said. “I guess there’s a silver lining coming off the game in Paris. It’s been three or four days since we played and it will be another couple until Friday (vs. Denver). So, he gets a good chance for his body to resettle a bit and hopefully his shoulder is in a better place by Friday.” If he returns Friday, Antetokounmpo will have played just one game in 10 days dating to last week … Backup center Robin Lopez returned after missing the trip to Paris due to illness and contributed 10 points in 16 minutes.