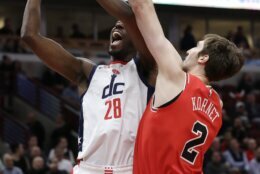 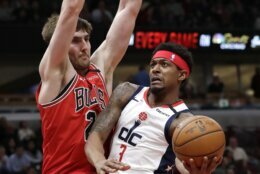 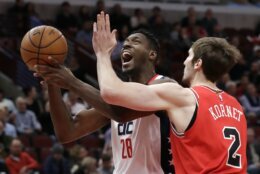 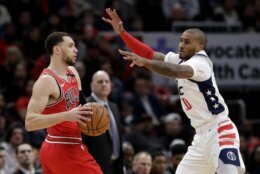 CHICAGO (AP) — Zach LaVine wants to play in the All-Star Game next month in Chicago.

He is making quite the case. Especially lately.

LaVine had 30 points, seven rebounds and seven assists, and the banged-up Bulls beat Bradley Beal and the Washington Wizards 115-106 on Wednesday night.

“I’ve been blessed to coach a lot of All-Stars, and I think he should be in the game,” Bulls coach Jim Boylen said.

Chicago placed seven players in double figures in its second win in its last nine games. Thaddeus Young had 18 points and eight boards, and Tomas Satoransky scored 18 points against his former team.

The Bulls outscored the Wizards 60-46 in the second half.

“They were getting in transition, some switches, made some tough shots,” Wizards coach Scott Brooks said. “We have to be better.”

LaVine went 6 for 11 from 3-point range in his career-best fifth straight game with at least 25 points. It’s the longest such streak for the Bulls since Derrick Rose accomplished the feat in six consecutive games in 2010.

LaVine’s All-Star argument is weighed down by Chicago’s 15-27 record, but he is averaging a career-best 24.6 points in his sixth NBA season.

“It would mean a lot. It’s one of my goals,” LaVine said of the All-Star Game. “I think it would be great for the city, having one of (its) guys there. I don’t feel like I need the verification of it. I think I know where I am as a player and how I’ve been playing.”

Beal scored 23 points on 8-for-13 shooting after he was listed as questionable because of right shoulder soreness. The high-scoring star also has been hampered lately by soreness in his lower right leg.

Jordan McRae had 16 points for Washington, which has dropped three of four. Isaiah Thomas and Davis Bertans scored 12 points apiece.

Chicago held on down the stretch despite playing short-handed after Daniel Gafford and Chandler Hutchison left with injuries.

Gafford dislocated his right thumb on a steal in the first quarter. The 6-foot-11 Gafford called timeout after picking off a pass by Ian Mahinmi, and then jogged off the court in the direction of the Bulls’ locker room.

X-rays were negative, and the team said he is expected to miss two to four weeks.

“I thought it was just like a slight jam of my thumb and I looked at my thumb and it was way more than a jam,” a chuckling Gafford said.

Hutchison re-injured his right shoulder when he was fouled on a dunk in the fourth, leading to a hard fall. The 23-year-old Hutchison, who had 11 points on 5-for-7 shooting, just returned last week from a right shoulder sprain.

“Chandler is going to be re-evaluated tomorrow,” Boylen said. “Same shoulder that’s been bothering him, so we’ll see where that goes.”

The teams played the second half with red streamers hanging from the overhead scoreboard, remnants of a Disney-themed halftime show. One of the streamers fell down during a timeout with 8:53 left in the third quarter, and two workers scurried out to pick it up before play resumed.

Wizards: Rookie F Rui Hachimura traveled with the team to Chicago, but remains out with a groin injury. He hasn’t played since Dec. 16. “He’s doing well,” Brooks said. “Shot around a little bit, very, very light shooting yesterday. … Hopefully we can get him on the court more each day.” … C Thomas Bryant played about 12 minutes in his second game back after missing 20 games with a foot injury. The 6-foot-10 Bryant is on a minutes restriction. “He’s missed a lot of time,” Brooks said. “Throwing him back into the fire in the NBA competitiveness. We’ll take our time still.”

Bulls: F Otto Porter Jr. missed his 33rd consecutive game with a broken left foot. Boylen said he had no update on his status. “He’s very frustrated,” Boylen said. “I just try to keep him up and be positive and you know we’ll take you back when you come back.” Boylen said there has been no talk of shutting Porter down for the season.

Bulls: Visit the Philadelphia 76ers on Friday night for their first meeting of the season.