The Miami Heat built a huge lead, wasted every bit of it, benched their entire starting five and wound up having to go to overtime yet again.
(1/5) 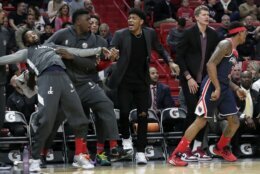 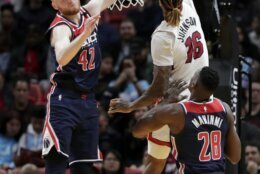 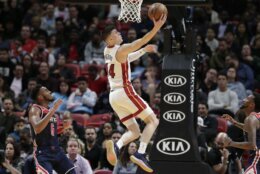 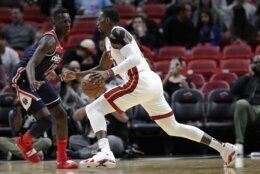 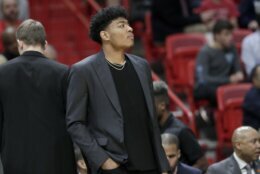 MIAMI (AP) — The Miami Heat built a huge lead, wasted every bit of it, benched their entire starting five and wound up having to go to overtime yet again.

Tyler Herro scored 25 points, Jimmy Butler scored nine of his 24 points in overtime and the Heat wasted a 21-point cushion before beating the Washington Wizards 134-129 on Wednesday night.

Butler also had 10 assists and seven rebounds for the Heat, who improved to 20-1 at home and 8-0 in overtime this season. Goran Dragic had 22 points and 10 assists, Kendrick Nunn scored 14 points and Duncan Robinson finished with 13 for the Heat.

Bradley Beal had a game-high 38 points for Washington on 16 for 24 shooting. Davis Bertans scored 24, Isaiah Thomas and Jordan McRae each had 14 and Ian Mahinmi scored 10 for the Wizards.

Washington fell to 1-6 in games decided by five points or less. Miami is 10-4 in such games. The Heat took 36 free throws to Washington’s 20, a discrepancy Beal noticed.

“It’s kind of sad that we get disrespected, especially myself, disrespected the way I do,” Beal said. “I attack the basket. We can look at my last three drives and I got fouled on all three of them. It is what it is.”

Beal scored with 22.2 seconds left in overtime to get Washington within 131-129. Butler made one of two free throws to push the lead to three, and Beal got a great look on a stepback 3-pointer that would have tied the game.

It hit the back of the iron, bounced over the top of the backboard and Dragic sealed it with a pair of free throws with 7.3 seconds left.

Miami led by as many as 21 in the second quarter, settled for a 19-point lead at the half and seemed well on its way to another home win.

Until things changed, that is.

The Wizards needed about three minutes to slice Miami’s lead to 10. Another couple minutes later, it was down to three. And that was enough for Heat coach Erik Spoelstra — who pulled all five of his starters with 6:41 left in the quarter.

For the next 10 minutes and 28 seconds, all five starters stayed on the bench. The backups lost the lead briefly before reclaiming it and going up by as many as 10 on a 3-pointer by Dragic with 9:40 left. Spoelstra put Butler and Bam Adebayo back into the game with 8:13 remaining, hoping Miami could close things out.

The Wizards, down by 10, went on a 19-6 run capped by back-to-back layups by Beal that gave his team a 118-115 lead with 1:35 left. Herro set up James Johnson for a corner 3 a minute later to tie the game, both teams sputtered on their final possessions of regulation and to overtime they went.

Perhaps the best on-court sight for the Wizards on Wednesday came about eight hours before the game, when rookie Rui Hachimura was able to go through a full on-court workout for the first time since he injured his groin on Dec. 16.

“Hope to get him back sometime before All-Star break, but there’s no rush,” Wizards coach Scott Brooks said. “We’re going to be careful on his comeback because he hasn’t played. We’ll ramp it up slowly with some off days, recovery days.”

Heat: Miami is 38-1 all-time in home games and 48-2 overall when scoring 125 or more points. … Former Heat intern Anthony Walker Jr., a linebacker for the Indianapolis Colts, was in attendance. … Robinson made his first 3-point attempt for the fifth consecutive game.

Hachimura’s workout wasn’t the only injury news for Washington on Wednesday. Injured Wizards point guard John Wall — who hasn’t played in an NBA game since Dec. 26, 2018, and isn’t expected to return at any point this season — told The Washington Post that he spent part of the day in a gym at a downtown Miami hotel playing 5-on-5, a run that included former Heat players Amar’e Stoudemire and Michael Beasley.