Marc Gasol scored a season-high 20 and matched his career high with six 3-pointers, Norman Powell added 28 and the Raptors beat the Washington Wizards 140-111, matching the franchise record for points in a game.
(1/10) 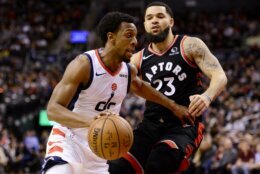 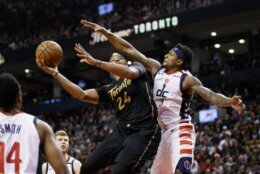 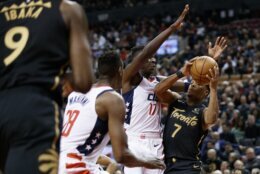 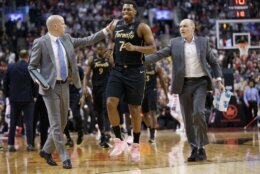 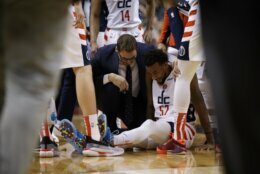 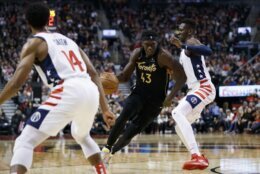 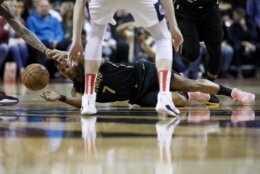 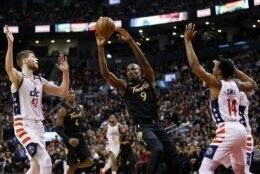 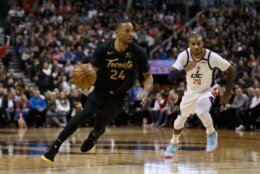 Gasol scored a season-high 20 and matched his career high with six 3-pointers, Norman Powell added 28 and the Raptors beat the Washington Wizards 140-111, matching the franchise record for points in a game.

The Raptors also scored 140 points in a double-overtime win at Washington on Jan. 13, 2019. This was the most points they’ve ever scored in regulation.

Gasol shot 6 for 7 from 3-point range as the Raptors set a franchise record by making 22 treys. It was the third time Gasol has made six 3-pointers in a game. Powell added four from long range.

“We’re trusting one another, we’re moving the ball,” Powell said. “We’re letting the offense work for us.”

Toronto made 22 of 43 attempts from beyond the arc.

Gasol played his second game after missing the previous 12 because of a strained left hamstring. Powell scored 20 or more for the third straight game after sitting out 11 games because of a left shoulder injury.

Raptors coach Nick Nurse said Gasol and Powell are “fresh as daisies” after their absences.

“Marc played for 19 straight months,” Nurse said of Gasol, who followed up the NBA Finals by leading Spain to a World Cup title in China last summer. “He finally had a month off, so he’s got a little bounce back.”

While he appreciated the break, Gasol didn’t find it easy to watch from the bench while he was hurt.

“Sitting for a few weeks kind of makes you itch a little bit and makes you want to really play and get back and help your team win,” he said.

Terence Davis II matched his career best with 23 points, OG Anunoby had 18 and Serge Ibaka 15 for the Raptors, whose previous high this season was 133 points in a home win over Cleveland on Dec. 16.

Pascal Siakam scored 12 points and Kyle Lowry had 11 as the Raptors won their seventh consecutive game against the Wizards, and fifth straight at home. Toronto has won 17 of its past 20 regular season meetings with Washington.

The Raptors, who won at Oklahoma City on Wednesday, posted back-to-back victories for the first time since Dec. 22, when they capped a five-game winning streak by beating Dallas. Toronto has gone 6-6 since that win.

Raptors guard Fred VanVleet sat for the fifth straight game because of a strained right hamstring, but is expected to return when Toronto visits Minnesota on Saturday night.

Washington made a season-worst 28 turnovers, leading to 30 points for the Raptors.

“We didn’t play well, we turned the ball over,” Wizards coach Scott Brooks said. “We played against a championship team that was clicking on all cylinders.”

Troy Brown Jr. scored 22 points, Isaac Bonga had a career-high 17 points and 10 rebounds, and Bradley Beal scored 14 points as the Wizards lost their third straight and fourth in five.

Beal expressed his frustration after the Wizards lost at Chicago on Wednesday, but didn’t want to expand on those comments after another disappointing performance.

Wizards guard Jordan McRae injured his left ankle while going after a loose ball early in the second quarter and had to be carried off the court, unable to put weight on his left leg. McRae did not return. He was wearing a walking boot on his left leg after the game.

Wizards: Brooks said rookie F Rui Hachimura might not return until February. Hachimura hasn’t played since Dec. 16 because of a groin injury. … The Wizards made 23 turnovers in a Jan. 8 loss at Orlando. … Washington is 5-17 on the road.

Raptors: Lowry has five or more assists in all 30 games he’s played this season. … Toronto outscored Washington 34-19 in fast break points, and 58-40 on points in the paint.

Toronto (27-14) and Washington (13-28) are both at the midpoint of the regular season following Friday’s game. The Raptors have been above .500 at the halfway mark in each of the past seven seasons.

The Raptors matched their season high with 16 steals.