As coach Scott Brooks rattled off the things he was happy about in Washington’s 137-116 win over the Minnesota Timberwolves on Friday night he didn’t even mention Bradley Beal’s second straight 44-point performance until he was prompted.
Listen now to WTOP News WTOP.com | Alexa | Google Home | WTOP App | 103.5 FM
(1/6) 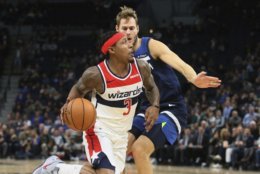 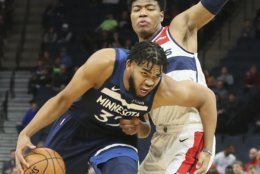 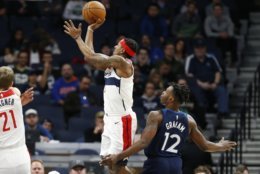 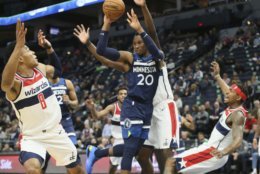 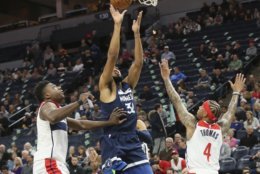 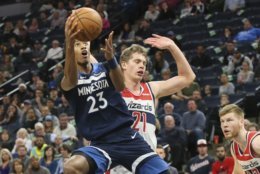 MINNEAPOLIS (AP) — As coach Scott Brooks rattled off the things he was happy about in Washington’s 137-116 win over the Minnesota Timberwolves on Friday night — Moritz Wagner’s best game in the NBA, improved defense in the second half — he didn’t even mention Bradley Beal’s second straight 44-point performance until he was prompted.

“I forgot about Brad,” Brooks said. “He’s a stud. He brings it every night.”

The Wizards have grown accustomed to Beal carrying the load on offense, as he did once again on 15-of-22 shooting. It was the third 40-point outburst this season for the All-Star guard, who has topped 30 five times in his last seven games.

It was Wagner’s big game, though, that helped set the tone for Washington.

Wagner came off the bench to add 30 points and 15 rebounds — both career highs. He became the first reserve in NBA history to have 30 points, 15 boards and four 3-pointers in a game.

“I just tried to do my job,” Wagner said. “I tried to talk to (my teammates) in a positive way. I’m working on that every day, kind of stay within the game and not let distractions distract me.”

The things Wagner did on the defensive end were the talk of Washington’s postgame locker room. The second-year center drew three charges to help spark the Wizards’ defense in the first half.

“Those are energy boosts,” Beal said. “Those are smart plays, getting Karl-Anthony Towns in foul trouble and trying to make it difficult and frustrating guys. He’s really good at that.”

Wagner and the Wizards dominated Minnesota down low all night. Washington scored 76 points in the paint, a season high.

Towns, celebrating his 24th birthday, led the Timberwolves with 36 points. Minnesota’s star big man, who missed the first meeting with Washington this season while serving a two-game suspension, scored 19 in the second quarter.

Neither team played much defense in the first half, as Washington led 76-73 at halftime. The Wizards held Minnesota to 43 second-half points.

“Second half came and we continued to not play the defense we wanted to play and we just couldn’t match them bucket for bucket,” Towns said. “And that’s why the game got out of hand.”

The Timberwolves were without leading scorer Andrew Wiggins, who missed the game due to personal reasons. Wiggins was averaging a team-high 25.9 points through the first 11 games of the season.

Wiggins had been especially effective over his last six games, averaging 31.6 points.

“Obviously, our thoughts and prayers are with him and we did miss him,” Minnesota coach Ryan Saunders said.

As the Timberwolves adjusted their lineup in Wiggins’ absence, point guard Jeff Teague stepped back into the starting five after coming off the bench Wednesday against San Antonio. He had 13 points and 11 assists.

Wizards: Entered with the third-worst scoring defense in the NBA, allowing 120 points per game. … The Wizards scored 27 points off 20 Minnesota turnovers, a season high. … Washington’s 38 assists marked a season high.

Timberwolves: Saunders didn’t know if Wiggins would be available Saturday against Houston. “I don’t comment necessarily on personal matters,” Saunders said. “But one thing I will say is family is family, and we are family. Andrew has the time that he needs to deal with any personal matters.” … Minnesota transferred two-way player Kelan Martin to the roster. Martin entered late in the first quarter, his second appearance with the Timberwolves this season. … The Wolves were 11 for 37 from 3-point range.

Wizards: At the Orlando Magic on Sunday, the final stop on a three-game road trip.

Timberwolves: Host the Rockets on Saturday. Houston will be without Russell Westbrook and Clint Capela.