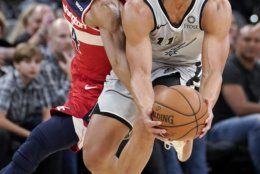 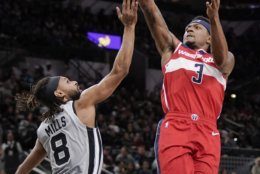 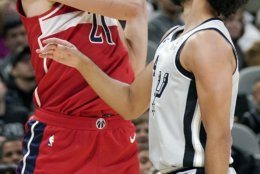 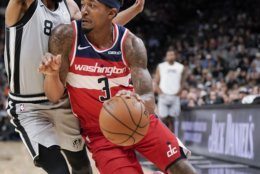 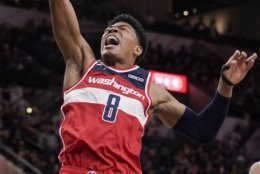 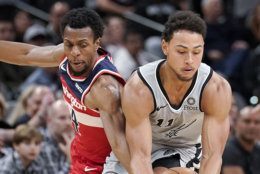 SAN ANTONIO (AP) — The San Antonio Spurs admitted it was tough trading Davis Bertans to Washington, and the subsequent circumstances surrounding his departure only made matters worse.

The Spurs certainly had some seller’s remorse after Bertans’ play Saturday night, but San Antonio was happy to prevail over the Wizards.

DeMar DeRozan scored 26 points, including the game-winning basket in heavy traffic in the final seconds, and San Antonio beat Washington 124-122.

Bertans, traded from San Antonio to Washington in the offseason, made all five of his 3-point attempts and scored 23 points against his former team. Spurs coach Gregg Popovich was grateful Bertans didn’t take the Wizards’ final shot.

“I almost jumped out on the court,” Popovich said. “He had a great game. He was wonderful. He’s a super human being, a heck of a player. I’m actually happy for him. He was great. He was great.”

Bertans was traded to clear cap space for Marcus Morris, who agreed to a two-year deal with San Antonio only to back out of the agreement and instead sign a one-year contract with New York. Having already dealt Bertans, the Spurs opted to sign Trey Lyles.

“It was emotional a little bit,” Bertans said of his return. “I spent a lot of time here. As I see it, even though I got traded, there’s nothing but love for the Spurs and that’s mutual.”

That love was evident in Popovich’s playful banter with Bertans on the court following the game and former Spurs general manager R.C. Buford’s long embrace with Bertans in the Wizards locker room.

Bertans got to see the Spurs grind out a victory as an opponent for the first time in his four-year career. San Antonio recorded its 20th straight home victory over Washington with some late heroics.

Using a screen by LaMarcus Aldridge near midcourt, DeRozan drove to the basket and spun in a layup between Rui Hachiumra and Thomas Bryant, putting the Spurs up with 5.5 second remaining.

“I tell him all the time, I need you to take over at all times, not just when we really, really need it,” San Antonio point guard Dejounte Murray said. “But he did his thing tonight. None of us were shocked or surprised. That’s DeMar for you.”

Bradley Beal attempted to force overtime with a driving layup, but Derrick White blocked his shot and grabbed the ball as the buzzer sounded.

“Bottom line is, he didn’t get the call,” Washington coach Scott Brooks said, “but that’s basketball. You move on to the next game. We keep playing like this, we’re going to get the respect.”

Beal had 25 points and Hachimura added 16 points for the Wizards.

Wizards: Washington’s last victory in San Antonio was Dec. 11, 1999, when Mitch Richmond scored 31 points to beat Tim Duncan, who is now a Spurs assistant coach. … The Spurs played a tribute video for Bertans prior to player introductions. Bertans averaged 6.2 points in 220 games over three seasons with San Antonio. … Isaiah Thomas played in his first game since April 7, when he had 10 points and three assists in 24 minutes at Portland. Thomas was healthy, but did not appear in any postseason games for Denver last season. Thomas had 16 points and five assists against the Spurs.

Spurs: Aldridge was 2 for 3 on 3-pointers, making multiple 3s in a game for the first time since Dec. 23, 2017. Aldridge has made 124 3-pointers in his 14-year career. … Bryn Forbes played in his 200th career game, joining Avery Johnson, Bruce Bowen, Mark Olberding, Fabricio Oberto, Jaren Jackson and Gary Neal as the only undrafted players to reach that milestone with the Spurs. … Lonnie Walker IV drew loud cheers as he made his season debut two minutes into the fourth quarter. Walker made his first attempt, a right-handed runner in the lane, for his only points in five minutes. … The Spurs had just nine turnovers after committing 21 in their season opener.

The Spurs are limiting Murray’s minutes as he returns from surgery to repair his right ACL, which forced him to miss last season.

Murray played 23 minutes against the Wizards after playing 24 minutes in the Spurs’ season opener against the Knicks on Wednesday. The 6-foot-5 guard has looked good in both games, but neither he nor the Spurs are ready to do away with his minutes restriction.