Bradley Beal had 24 points, Jeff Green added 22 and Thomas Bryant scored 16 to go with a career-high 15 rebounds as Washington beat the Atlanta Hawks 114-98 on Wednesday night.

WASHINGTON (AP) — Just because All-Star point guard John Wall is out for the season, that doesn’t mean the Washington Wizards think they’re finished.

Bradley Beal had 24 points, Jeff Green added 22 and Thomas Bryant scored 16 to go with a career-high 15 rebounds as Washington beat the Atlanta Hawks 114-98 on Wednesday night.

Wall, scheduled for surgery on his left heel Jan. 8, hasn’t played in any of the past three games but the Wizards have won the last two.

“We all have to be better,” Beal said. “We know how much weight he carries, and his importance to this franchise and this team. We’re definitely going to miss him. We hate that he’s out. We’re not sitting here saying we’re a better team without him. … We have to realize, accept the fact that he won’t be with us this year and we’ve got to do our best to make a run at it.”

Tomas Satoransky had 14 points, seven assists and a career-best 11 rebounds for the Wizards, who improved to 15-23. They’ve won consecutive games for the first time since taking three straight from Dec. 1-5.

Satoransky filled in for Wall last season when he had surgery on his left knee and missed 41 games. As a result, Satoransky doesn’t feel the pressure he did a year ago.

“I maybe felt like that last year because it was an uncertain situation for me,” he said. “Now, I know my role. People know me. They have confidence in me. That’s how I feel on the court. I know what I can bring to the team. Obviously, it’s different than John, but you have to play smart.”

Atlanta was led by Alex Len, who a season-high 24 points and 11 rebounds. John Collins scored 21.

The Wizards took the lead midway through the first quarter. The Hawks got close several times in the second half before finally tying it at 94 when Len hit a jumper with 6:44 to play.

Hawks: C Dewayne Dedmon returned to the lineup after missing two games with left knee soreness. … G Kent Bazemore was out for a second game with a sprained right ankle. … Atlanta coach Lloyd Pierce was assessed a technical foul in the third quarter.

Wizards: F Markieff Morris missed his third straight game with upper back/neck stiffness. He saw a specialist and the Wizards were awaiting results. … F Otto Porter returned to the lineup after missing 10 games with a bruised right knee. He didn’t start for the first time this season and was restricted to 13 minutes. He scored nine points.

Collins said Atlanta changed its game plan with Wall out for Washington, but it didn’t work.

“John Wall was going to be out and they move the ball,” Collins said. “A lot of people tend to eat when he’s out so we knew they were going to try and to come and have a balanced game and that’s what they did tonight.”

Wizards coach Scott Brooks knows he needs to change up schemes without his star guard.

Hawks: Visit the Milwaukee Bucks on Friday in the finale of a three-game road trip.

Wizards: Visit the Miami Heat on Friday in the opener of a three-game trip. 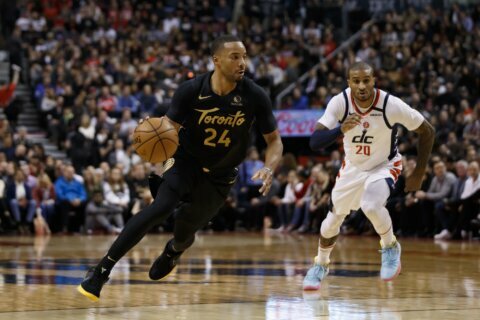