Kalil out, Bell questionable for Jets vs. Redskins

He was officially ruled out Friday, along with safety Matthias Farley (quadriceps) and linebackers C.J. Mosley (groin) and Paul Worrilow (quadriceps).

“He didn’t have a setback,” coach Adam Gase said of Kalil. “We’re just trying to figure out what’s going on with him and we just thought that was the best thing to do.”

Kalil will again be replaced by Jonotthan Harrison on the starting offensive line.

Running back Le’Veon Bell missed practice Wednesday with an illness and was limited Thursday and Friday while dealing with a sore knee and ribs. He’s expected to play Sunday at Washington.

Cornerback Darryl Roberts is doubtful with a calf injury. Bless Austin or Nate Hairston could get the start against the Redskins.

Wide receiver Robby Anderson was a full participant at practice Friday after being limited the two previous days with back and shoulder issues.

NOTES: A day after WR Quincy Enunwa criticized the team on social media for “excessive” fines for missing two treatments, Gase said the team will handle the situation internally. Enunwa, on injured reserve with a neck injury, sent a series of tweets Thursday night explaining his situation and why he was upset. Gase wasn’t concerned that there’s a miscommunication issue between the players and management. “No, we handle our stuff in house and some people choose to use social media,” he said. “There’s probably a reason they’re doing that.” … Beachum said he reached out to the NFL Players Association on behalf of Enunwa to discuss the receiver’s fines and to see if he has any recourse. Beachum is the alternate player rep — behind Enunwa. 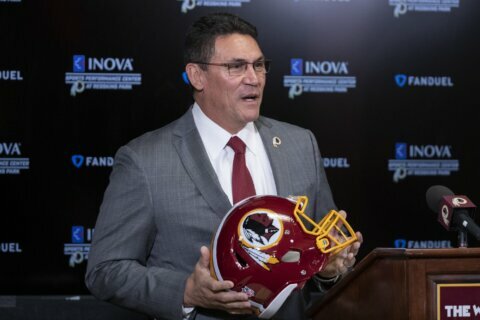