Carson Wentz threw a pair of deep touchdown passes to DeSean Jackson, and the Philadelphia Eagles overcame a 17-point deficit to beat the Washington Redskins 32-27 on Sunday.
(1/8) 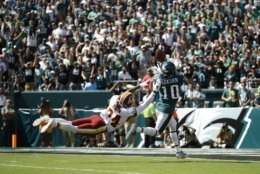 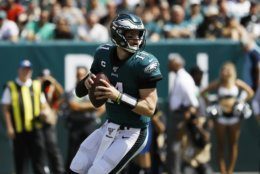 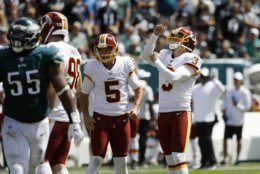 Carson Wentz threw a pair of deep touchdown passes to Jackson, and the Philadelphia Eagles overcame a 17-point deficit to beat the Washington Redskins 32-27 on Sunday.

Wentz was 28 of 39 for 313 yards and three TDs in his first game since Week 14 after not taking a snap in the preseason. Jackson had eight catches for 154 yards. The Eagles racked up 436 total yards.

“I couldn’t stay calm,” Jackson said. “I was overly excited like a kid before Christmas, knowing what I mean to the city and what the city means to me. I couldn’t think of it being any other way.”

Case Keenum threw for 380 yards and three TDs, helping the Redskins build a 17-0 lead in his first start with his fourth team in four seasons.

But Philadelphia’s high-powered offense took over and the defense settled down after a sloppy start.

Playing his first game back in Philadelphia since former Eagles coach Chip Kelly cut him following his third Pro Bowl season in 2013, Jackson picked up where he left off six years ago and showed no signs of slowing down at age 32.

“We were able to get him in some mismatches and hit those two home runs,” Wentz said of Jackson. “With him being out there and the other weapons we have, we’re going to keep teams on their toes.”

Jackson blew past the defense on a third-and-10 in the third quarter, caught Wentz’s pass inside the 10 and strolled into the end zone to give the Eagles a 21-20 lead. The 53-yard TD reception was Jackson’s second of 50-plus yards in the game and the 31st of his career. Only Hall of Famer Jerry Rice had more at 36.

“One of those was miscommunication and the other was a great throw, but DeSean is DeSean,” said Redskins coach Jay Gruden, who had Jackson in Washington from 2014-16. “You can never blow a coverage when No. 10 is on the field.”

Zach Ertz caught a 26-yard pass to set up Alshon Jeffery’s first career rushing score on the first play of the fourth quarter. Jeffery caught a backward pass from Wentz and fought his way into the end zone. Darren Sproles ran in for the 2-point conversion to extend the lead to 29-20.

The Eagles trailed 17-0 in the second quarter when Jackson made an over-the-shoulder, 51-yard TD catch.

“If they’re going to leave D-Jack on-on-one, it’s going to be a long day for the other team,” Ertz said.

Wentz found Jeffery going across the back of the end zone for a 5-yard TD pass to cut Washington’s lead to 20-14 in the third quarter.

Keenum hit Terry McLaurin perfectly in stride on a deep pass for a 70-yard TD to give the Redskins a 17-0 lead, inciting the first boos from fans anticipating a championship season.

The Redskins got the ball to start and scored a touchdown on the season’s opening drive for the first time since 2004. Vernon Davis turned a short pass from Keenum into a 48-yard score after hurdling Ronald Darby and breaking a tackle on his way down the right sideline.

“They’re a great defense,” Keenum said. “The way the game played out, we were able to move the ball through the air. There’s a lot to learn. I’m excited to go watch the film.”

Four-time All-Pro and 2012 NFL MVP Adrian Peterson was inactive for the Redskins after leading the team with 1,042 yards rushing last season.

Eagles: LB Kamu Grugier-Hill (knee) and CB Jalen Mills (foot) were the only starters still out of the lineup. … DT Malik Jackson limped off the field late in the fourth quarter and wore a walking boot after the game. It’s unknown the extent of his injury.

Redskins: Host Dallas next Sunday. The Cowboys have won six of the last seven meetings between the division rivals.

Eagles: At Atlanta next Sunday. The Falcons are seeking to avenge losses in Philly in an NFC divisional playoff game following the 2017 season and the NFL opener last year.