Dak Prescott spreading the wealth in hot start for Cowboys

Dak Prescott’s hot start has plenty to do with depth at positions that looked promising in the preseason, and have delivered in a pair of victories over NFC East rivals for the defending division champions.

“Everybody’s alive,” coach Jason Garrett said after Sunday’s 31-21 win at Washington. “You want to be able to feature certain guys in your offense, but we also want to be able to say, ‘Hey, I’ll throw it to this guy. He’s open. Let’s give him a chance.'”

The best case in point against the Redskins was receiver Devin Smith. A 2015 second-round pick by the New York Jets after helping Ohio State win a national championship, Smith sustained a pair of knee injuries that wrecked his career.

Smith’s 51-yard touchdown catch sparked a second consecutive game with five straight scoring drives for Dallas (2-0). It also made Smith the fifth receiver with a catch of at least 25 yards from Prescott, who had five of those type of plays in the 35-17 season-opening win over the Giants.

Prescott completed his last 18 passes to tie the longest streak of his career, finishing 26 of 30 for 269 yards and three touchdowns. He has completed 82 percent of his passes for 674 yards with seven TDs and one interception in two games.

Amari Cooper and Jason Witten have two touchdowns receiving apiece, while Smith, Randall Cobb and Blake Jarwin have one.

The plan to get RB Ezekiel Elliott up to speed is coming along nicely after the two-time rushing champion missed the entire preseason holding out for a new contract.

Elliott reached 100 yards (111) thanks to a 27-yard run the play before Prescott took a knee to run out the clock. The fourth-year back was right on his career average of 25 touches (23 carries, two catches for 9 yards) in 53 snaps after getting 14 touches on 37 plays in the opener.

The biggest breather for Elliott came on an 11-play drive that ended with Brett Maher’s 25-yard field goal early in the fourth quarter. Rookie Tony Pollard took the whole series, getting three carries for all 22 of his yards rushing and his only catch, a 3-yarder.

“I think slowly and surely, I’m getting back in my rhythm and knocking the rust off,” Elliott said. “I feel good about everything going forward.”

The Dallas defense is a little light on turnovers and sacks so far. Getting takeaways has been a persistent problem, and the Cowboys have two through two games, a pair of fumbles against the Giants.

While Tyrone Crawford had an important sack of Washington’s Case Keenum when the Dallas offense was struggling in the first half, it was the only one. The Cowboys sacked Eli Manning just once as well.

It figured that new offensive coordinator Kellen Moore would incorporate Prescott’s ability as a runner, and so far the 31-year-old play-caller has. Prescott had the longest carry for a quarterback in Dallas history with a 42-yarder to set up one of his three touchdown passes. Prescott’s 69 yards rushing were the second most of his career.

LG Connor Williams was beaten badly on the only sack of Prescott and again when quick pressure forced Prescott out of the pocket before his first interception in seven career games against the Redskins. Williams also had two penalties: a holding and a false start.

70 — Career receiving TDs for Jason Witten. One of the questions when Witten decided to come out of retirement for a 16th season after a year as a broadcaster was whether he could reach Dez Bryant’s franchise record of 73 TDs receiving. The 37-year-old has two in two games.

WR Michael Gallup is expected to miss up to four weeks after arthroscopic surgery on his left knee. He sustained the injury in the second half against the Redskins. DT Antwaun Woods also injured a knee but may not miss much time.

The Cowboys will say all the right things about this, but what appeared to be a safe path to 3-0 might now extend to 4-0. Dallas is a huge favorite at home against Miami on Sunday, with the Dolphins (0-2) essentially dismantling their roster for a rebuild. Now the Cowboys know they won’t face QB Drew Brees (torn thumb ligament) in a visit to New Orleans in two weeks. 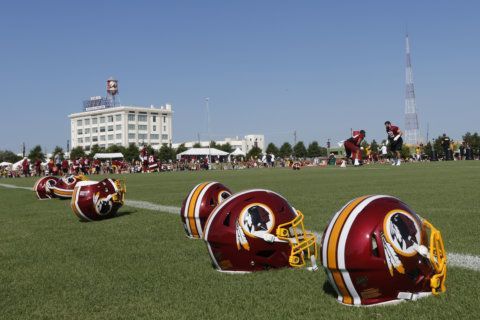