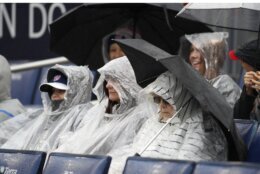 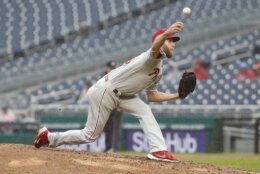 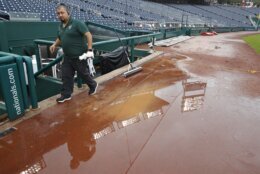 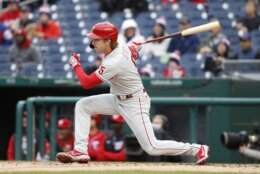 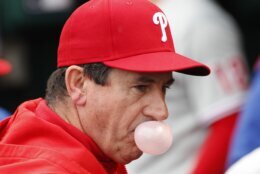 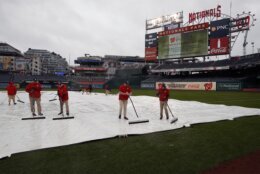 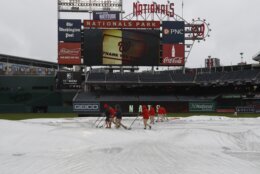 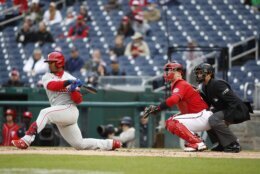 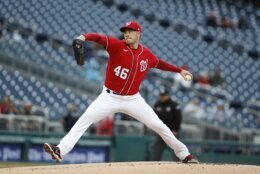 And the three-time All-Star catcher in his ninth season in the big leagues finally wants a taste of the playoffs himself, too.

So of course Realmuto is keeping tabs on what the Brewers do, watching them on a cellphone in the clubhouse after helping Philadelphia beat the Washington Nationals 8-1 Sunday in a game shortened to six innings by a downpour.

“This is what you play for, obviously. We play to win and get to the postseason and win the World Series. So the fact that I haven’t been able to do that yet is obviously extremely disappointing for me,” said Realmuto, who threw out a would-be base stealer in the third inning and hit his 22nd homer of the season in the sixth. “It’s fun to be in the race and fun to have a chance.”

Philadelphia and interim manager Rob Thomson took three of four from the worst-in-the-majors Nationals to improve to 86-73 after getting to town on a five-game losing streak. Combine Sunday’s victory with a 4-3 loss by the Brewers (84-75) against the Miami Marlins in 12 innings, and the Phillies hold a two-game lead for the third NL wild-card berth with three games left.

Starting Monday, Philadelphia heads to Houston, and Milwaukee hosts Arizona. The Phillies hold the tiebreaker over the Brewers if they finish with identical records.

“Relying on other people isn’t really a plan,” Thomson said about the notion that a loss by the Brewers would get his team into the playoffs. “We’ve got to get it done.”

Fans opened umbrellas during a downpour that began in the third inning, and bundled up against a temperature in the 50s. They watched players slip on the slick edge where the muddy infield met the grass or navigate puddles — pools, really — along the warning track.

One Nationals hitter ended up with a double when Phillies first baseman Rhys Hoskins fell and couldn’t make a play on what normally would have been a routine bouncer. That helped Washington get a run in the sixth; when that inning ended, the tarp was pulled out.

“I got a little worried. It really was bad,” Nationals manager Dave Martinez said. “Guys were complaining they couldn’t see very well.”

“It was tough. Windy, cold and definitely wet,” said Wheeler, who kept a rosin bag in a back pocket to dry his pitching hand.

The righty had seven strikeouts and no walks and allowed just two hits. Since returning after a month on the injured list with right forearm tendinitis, Wheeler has given up one run and nine hits in 15 innings across three starts.

“He’s exactly what we needed him to be this time of year,” Realmuto said, “so it’s definitely a morale boost for the team.”

Stott delivered an RBI groundout in the second inning and a two-run double in the fourth, while Schwarber — who homered twice Saturday to take his NL-leading total to 44 — added a three-run single in the fifth.

“Everybody’s started swinging a little bit,” Wheeler said. “We went through a little down drop right there. … (But) we locked it in.”

“I don’t think the numbers, obviously, were great,” Corbin said after the Nationals’ 104th loss of the season, the most since the franchise moved to Washington from Montreal in 2005.