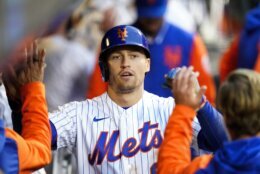 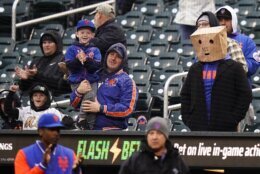 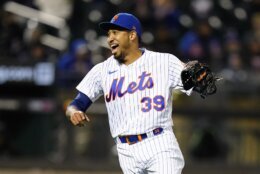 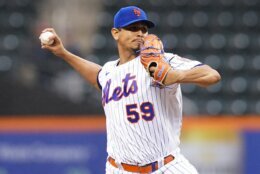 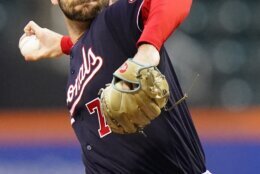 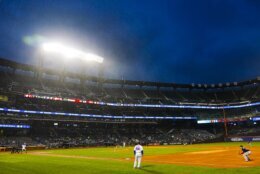 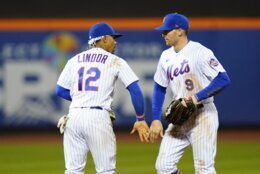 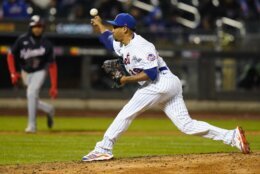 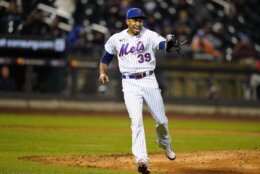 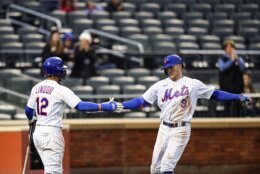 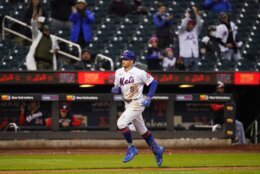 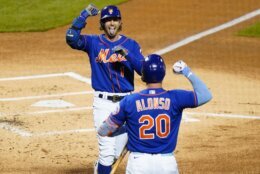 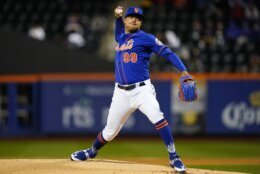 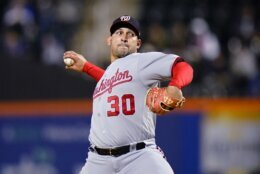 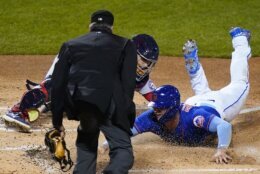 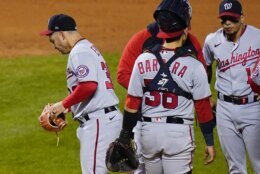 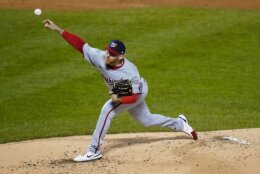 NEW YORK (AP) — New York was eliminated from the NL East race even as Brandon Nimmo, Francisco Lindor and Jeff McNeill opened with three straight homers to spark the Mets to an 8-0 win over the Washington Nationals and a sweep of a doubleheader on Tuesday night.

The Braves were batting in the sixth with a 2-1 lead in Miami when the Mets started the second game with three straight homers for the first time in team history.

Atlanta closed out its fifth straight division title with the 2-1 win over the Marlins as the Mets finished batting in the fourth, A few groans could be heard from the crowd, who earlier were chanting “Let’s Go Marlins.”

The Mets will face either the Padres or Phillies in a best-of-three wild-card series starting Friday at home. The winner of that series will face the NL-best Dodgers in the Division Series starting Tuesday.

Despite the historic start to the nightcap, the Mets fell short in the NL East race after leading the division for 175 days and holding a 10 1/2 game lead on June 1. New York also had a seven-game edge on Aug. 10 – three days after taking four of five from Atlanta at home.

Brandon Nimmo homered and drove in three runs for New York Mets in the first game.

The Atlanta Braves began the day with a magic number of one for winning the division after sweeping a three-game series from the Mets over the weekend.

Nimmo homered on the second pitch from Paolo Espino (0-9), Lindor homered five pitches later by reaching the second deck in right as a dog retrieved the ball and McNeil connected to right three pitches later.

It was the first time the Mets hit three straight homers since Michael Conforto, James McCann and Jonathan Villar achieved the feat Aug. 7, 2021 in Philadelphia.

The doubleheader at Citi Field began in raw conditions in front of a sparse crowd that included a few dogs as part of a “Bark in the Park” promotion and endured rain for the final three innings.

Taijuan Walker finished two outs shy of qualifying for the win, allowing four hits in 4 1/3 innings in the second game. Walker struck out 10 for his third double-digit strikeout game this year and 12th of his career.

Stephen Nogosek (1-1) got six strikeouts in 2 2/3 innings for his first career win.

Carlos Carrasco allowed two runs on five hits in four-plus innings in the first game. Adam Ottavino (6-3) pitched 1 2/3 innings and Edwin Díaz got four outs for his 32nd save.

Riley Adams hit a two-run homer for Washington, which took two of three at the Mets last month.

The Nationals took their 105th loss and officially clinched the worst record in the NL.

“I look at the season as a disappointment,” general manager Mike Rizzo said before the game. “I’ve always said that you are what your record says you are, and our record says we’re the worst team in the league right now. And it’s hard to argue with that.

Rizzo said Stephen Strasburg’s status for 2023 is unknown after the right-hander was limited to one start due to a series of injuries.

“It’s still a little bit of a mystery,” Rizzo said. “I know that he’s working hard strengthening his core and the other parts of his body. We’re just going to have to see.”

The 34-year-old right-hander has thrown a total of 31 1/3 innings in eight starts over the past three seasons combined. He had carpal tunnel surgery in 2020, then needed an operation to correct thoracic outlet syndrome in 2021.

After his only start of 2022, Strasburg went back on the injured list with a stress reaction of the ribs.

Mets: OF Starling Marte, who hasn’t played since Sept. 6 due to a broken right middle finger sustained when he hit by a pitch in Pittsburgh, is still experiencing discomfort. Manager Buck Showalter said Marte still can’t grip a bat but also did not declare him out for the opening round of the postseason.

RHP Erick Fedde (6-12, 5.27) starts for Washington Wednesday afternoon. The Mets did not announce a starter.