CJ Abrams' third hit of the game drove in the winning run in the bottom of the 10th Wednesday night to give the Washington Nationals a 3-2 victory over the Atlanta Braves, who fell into second place in the NL East.
Listen now to WTOP News WTOP.com | Alexa | Google Home | WTOP App | 103.5 FM
(1/5) 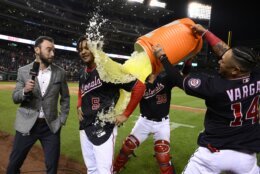 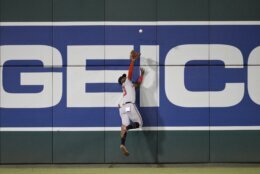 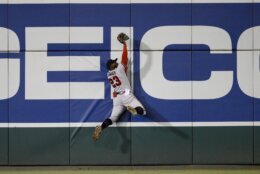 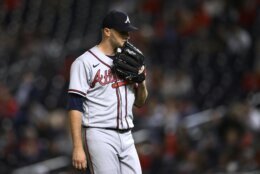 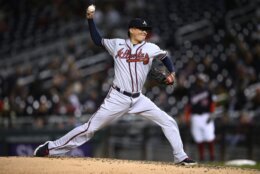 WASHINGTON (AP) — CJ Abrams’ third hit of the game drove in the winning run in the bottom of the 10th Wednesday night to give the Washington Nationals a 3-2 victory over the Atlanta Braves, who fell into second place in the NL East.

The Braves (97-59) dropped a game behind the New York Mets. The teams open a three-game series Friday in Atlanta, weather permitting.

“Couldn’t get a big hit,” Braves manager Brian Snitker said. “Bullpen came in and held the game there, just couldn’t get anything going offensively.”

Victor Robles bunted leading off the 10th against Jackson Stephens (3-3). Robles was initially called safe, but the call was overturned, with Alex Call moving to third. With the infield in, pinch-hitter César Hernández walked. Lane Thomas grounded to third, but Abrams singled to right, scoring Call for the first walk-off hit of his young career.

“Oh man, that was really fun,” Abrams said. “Close game, extra innings. That’s a dream. It was a lot of fun.”

Matt Olson had two hits, including his 30th homer of the season, for the Braves, who finished 4-3 on the road trip.

“Like to come away with a win there tonight, but a big series coming up. Still got a chance to win this division,” Olson said. “I’m sure it’s gonna be a packed house there.”

Atlanta tied it 2-all in the eighth. With two outs and a runner on second, Michael Harris II hit a grounder up the middle. Luis Garcia made a diving stop but bounced his throw to first and Joey Meneses couldn’t handle it. Harris was safe and Dansby Swanson came around with the tying run as the ball bounced away.

Washington starter Josiah Gray gave up a run on two hits over six innings. He walked two and struck out two. In two games against Atlanta this season, Gray pitched a combined 11 innings and allowed only three hits and one earned run, while striking out seven.

Braves starter Jake Odorizzi allowed two runs — one earned — on four hits in 3 2/3 innings. He walked three without a strikeout. He was coming off a loss to the Phillies in which he gave up eight runs on 10 hits and three walks in four innings.

“Too many free passes. That’s the thing that’s been bothering me. Just the execution of pitches,” Odorizzi said. “Stuff’s not the issue, it’s the location, it’s the execution.”

Olson’s homer tied the game 1-all in the second. He has collected at least one hit in each of his first 10 games at Nationals Park

In the third, Abrams singled and went to third when Eddie Rosario misplayed the ball in left. Luke Voit lined a single to left, scoring Abrams to make it 2-1.

Harris went 1 for 5 hitting third in the lineup for the first time. He has now batted at least once in every position in the order since joining the Braves in late May.

“He gets so many big RBIs,” Snitker said. “Just trying to figure out where to put him to get him up there. I like it when he comes up. It’s a good at-bat and he’s come through. Right now, he’s a versatile guy and I see him down the road as being a top-four guy.”

Nationals: Open a four-game series against the visiting Phillies on Friday and have not yet named a starter.