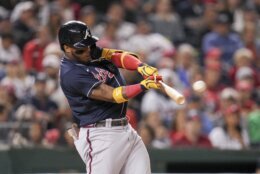 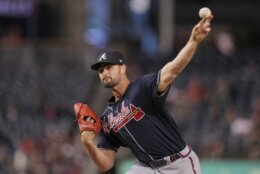 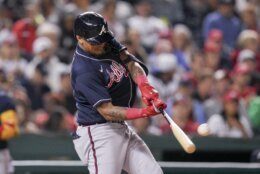 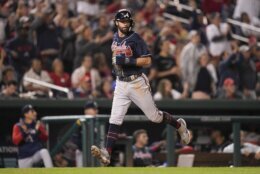 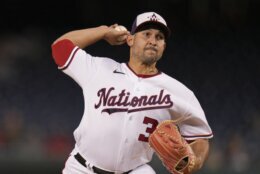 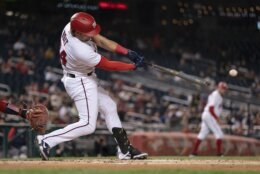 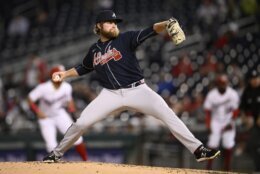 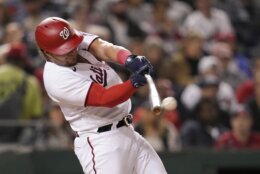 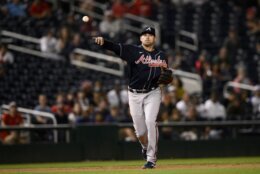 WASHINGTON (AP) — Ronald Acuña Jr. hit a pair of solo home runs and the Atlanta Braves beat the Washington Nationals 8-2 on Tuesday night for their fourth straight win, moving them into a first-place tie in the NL East with the New York Mets.

Orlando Arcia also homered and Michael Harris II had a two-run triple for the Braves, who caught the Mets when New York lost 6-4 at home to Miami. Both teams have seven games remaining, including a head-to-head three-game series beginning Friday in Atlanta.

With the win, the defending World Series champion Braves (97-58) are guaranteed the No. 2 playoff seed in the National League if they finish ahead of the Mets.

“The hope is to win tomorrow and then the hope is to have a good series against New York this weekend,” Acuña said through a translator. “The division is on the line.”

Acuna is heating up down the stretch. He has hits in seven of his past nine games and is batting .294 (10 for 34) with four homers, eight runs and 10 RBIs during that span.

Victor Robles homered and Luke Voit had two doubles for the last-place Nationals (53-101).

Kyle Muller, recalled from Triple-A Gwinnett to start for the Braves, allowed two runs in 4 2/3 innings and was lifted after a two-out walk.

“He threw the ball really well,” manager Brian Snitker said. “I’d have loved to see Kyle get that last out in the fifth and get the decision but at that point in the game it’s about winning the game.”

Harris tied the score 2-all with a two-run triple in the fourth over the head of right fielder Lane Thomas, who paused momentarily before racing back to the wall.

“I don’t know that I’ve seen guys handcuff outfielders like (Harris) does,” Snitker said. “I’ve seen a lot of really good hitters but I’ve never seen anybody just … the explosion off the bat like that. Man, that’s something else.”

Espino would have been out of the inning unscathed had he been able to corral Matt Olson’s slow roller with two outs and one on.

With two outs in that fifth, Arcia’s fly ball just cleared the wall in left for his second homer in two games. Acuña followed with a line drive down the left-field line to make it 4-2.

Harris started a two-out rally in the sixth with an infield single. He was initially called out at first base, but Atlanta challenged and it was overturned. William Contreras singled and Eddie Rosario smacked a two-run double off the wall in center.

Acuña’s second home run of the night and 15th of the season made it 7-2 in the seventh.

Arcia has homered in five consecutive games at Nationals Park. The streak is tied for the longest by a visiting player at the stadium (2008-present) with teammate Dansby Swanson’s five-game streak from August 2021 to June 2022. Arcia is batting .523 (11 for 21) with five homers, eight RBIs and seven runs at Nationals Park this season.

Nationals: LHP MacKenzie Gore (elbow inflammation) had his fourth rehab outing at Triple-A Rochester on Monday night, pitching 3 2/3 innings and allowing six runs on six hits. He will throw a bullpen in Washington this week.

Nationals: RHP Josiah Gray (7-10, 5.17) threw five scoreless innings while allowing one hit in his only other 2022 start against the Braves on April 13 in Atlanta.