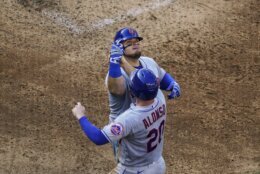 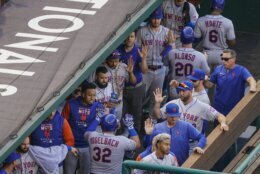 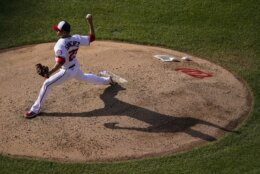 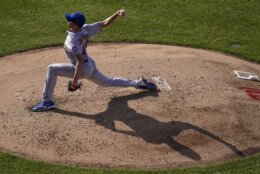 New York won for the eighth time in nine games and opened a 3½-game lead over second-place Atlanta in the NL East. The teams begin a four-day, five-game series Thursday in New York.

Mychal Givens, acquired Tuesday in a trade with the Chicago Cubs, entered in the ninth and surrendered solo homers to Keibert Ruiz and Lane Thomas in his Mets debut. Givens was charged with five runs, and Seth Lugo recorded the final out.

“We made it exciting at the end, but obviously it wasn’t enough,” Washington manager Dave Martinez said.

Washington lost for the fifth time in seven games a day after it traded star outfielder Juan Soto and first baseman Josh Bell to San Diego. The Nationals dropped to a major league-worst 36-70, including a 9-38 record against the NL East.

New York went ahead in the third when Francisco Lindor worked a nine-pitch walk against Aníbal Sánchez (0-4) and Alonso sent the next pitch over the wall in center. Alonso is 6 for 11 (.545) with three homers lifetime against Sánchez.

The Mets broke it open in the fifth after they loaded the bases on a walk, an error and an intentional pass to Alonso. Martinez then replaced Sánchez with Jordan Weems.

Vogelbach drove Weems’ fifth pitch into the Nationals’ bullpen in right for his third career grand slam. It was Vogelbach’s first homer since he was acquired in a July 22 trade with Pittsburgh.

“It’s easy to feel comfortable when you come into a team like this,” said Vogelbach, who is hitting .308 in nine games with the Mets. “Not just the players on the field, but the players off the field. It’s an easy clubhouse to come into.”

Bassitt didn’t allow a runner past second base. He permitted six hits, struck out four and walked one.

“He had everything going today,” Mets manager Buck Showalter said.

Bassitt has pitched 13 shutout innings against Washington this season.

The Nationals hit it into three double plays against the right-hander, bringing their majors-leading total to 103 this season.

Sánchez surrendered five runs — four earned — in 4 1/3 innings. He has dropped each of his four starts since returning from the injured list July 14, and his ERA rose to 7.65.

Nationals: RHP Tanner Rainey underwent Tommy John surgery. Rainey went on the injured list July 13. … 1B Luke Voit, who was acquired in the deal that sent Bell and Soto to San Diego, will join the team Thursday in Philadelphia. … DH Nelson Cruz (stiff neck) was out of the lineup.

Nationals: RHP Paolo Espino (0-3, 3.78 ERA) gets the nod as Washington begins a four-game series at Philadelphia. Espino is 0-3 with a 4.95 ERA since entering the rotation June 12.