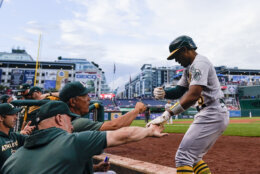 Murphy added two singles and drove in five runs for Oakland, which has won three straight after rallying from an early 4-1 deficit.

“We battled. We didn’t get down (on ourselves), jumped right back in,” Murphy said. “We didn’t let it snowball. Took the lead back and the bullpen kept it there.”

Dermis Garcia hit his first career home run and Tony Kemp had three hits for the A’s in their first game in Washington since they were swept June 7-9, 2005 at RFK Stadium.

Cole Irvin (7-11) allowed two runs in each of the first two innings, but labored through 5 1/3 innings for the win, allowing five runs on nine hits. He struck out six, walked one and hit two batters while throwing 105 pitches.

“In the first two innings I was trying to throw the ball by guys. That’s just not who I am,” Irvin said. “And then as we got later into that ballgame I started pitching. Once we started pitching, actually started making good pitches and finding our rhythm.”

Three relievers combined to allow one run over the final 3 2/3 innings.

Lane Thomas had a homer and a single for the Nationals. Luis Garcia homered and rookie Joey Meneses, 30, continued his torrid start, hitting three doubles to extend his hitting streak to nine games and raise his average to .352 over 23 games.

“He stays on the baseball. He can hit the ball the other way,” manager Dave Martinez of Meneses. “He’s just a good hitter. He gets himself in position to hit every pitch.”

Washington starter Erick Fedde (5-9) didn’t make it out of the third inning, giving up six runs on nine hits.

In the fifth, the A’s loaded the bases against Steve Cishek on a single sandwiched between two walks and Murphy followed with a shot to center off a slider for his first career grand slam and 17th homer of the season to make it 10-5.

“In that at bat he had hooked a slider earlier in the count foul,” manager Mark Kotsay said. “And generally you see guys maybe in that situation not have the success he ended up having in the at-bat. He got the same pitch and hit it out. Big momentum swing for us.”

Oakland took the lead with a five-run third that included a two-run homer by Garcia and a two-run double by Kemp.

HELP IS ON THE WAY

The Athletics are calling up LHP Ken Waldichuk to make his Major League debut Thursday against the Nationals. Ranked as Oakland’s No. 3 prospect by MLB.com, Waldichuk was acquired by the A’s from the Yankees in exchange for Frankie Montas and Lou Trivino at the Trade Deadline. He is 0-1 with a 3.38 ERA with 21 strikeouts in 18 2/3 innings over four starts at Triple-A Las Vegas.

Nationals: Martinez said rookie RHP Cade Cavalli will be shut down for two weeks because of shoulder inflammation. Cavalli made his Major League debut Friday and felt discomfort in his shoulder while playing catch on Saturday. An MRI revealed inflammation around the capsule, but no structural damage. … LHP MacKenzie Gore (left elbow inflammation) threw a 35-pitch bullpen session. Martinez said the next step for Gore will be a 50-pitch bullpen.