Josh Bell showed he's out of his slump by slugging his second home run in two games against his former team to lead the San Diego Padres to a 2-1 win over the Washington Nationals on Sunday.
Listen now to WTOP News WTOP.com | Alexa | Google Home | WTOP App | 103.5 FM
(1/12) 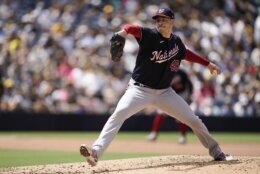 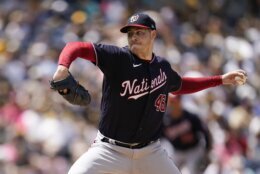 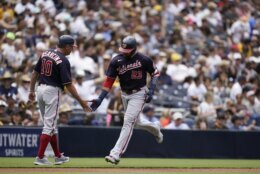 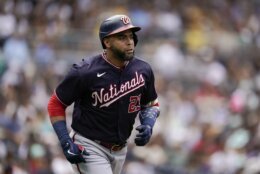 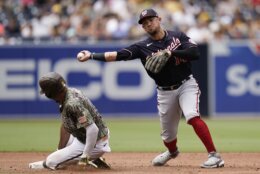 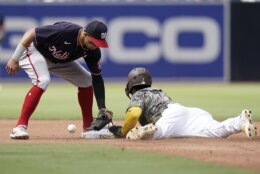 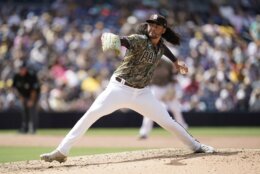 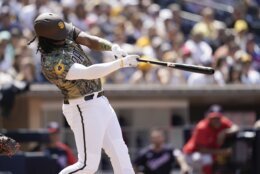 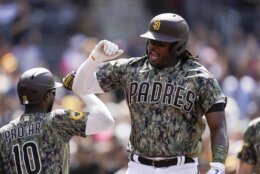 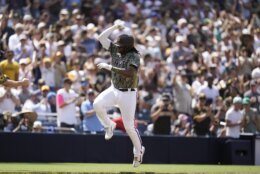 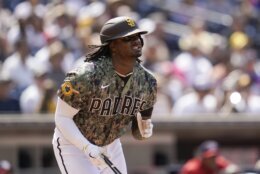 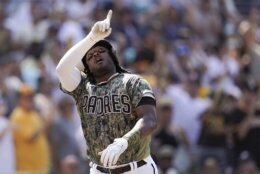 SAN DIEGO (AP) — Josh Bell showed he’s out of his slump by slugging his second home run in two games against his former team to lead the San Diego Padres to a 2-1 win over the Washington Nationals on Sunday.

“Baseball is a game of ups and downs, but yeah, I feel like two homers on back-to-back days — that’s a good sign for sure,” Bell said of putting his hitting slump behind him. “More affirmation that I am headed in the right direction. The routine is good, I just have to trust it now.”

Starter Sean Manaea (7-6) pitched seven strong innings for the Padres to earn the victory. Manaea allowed five hits and one run — a solo home run to Nelson Cruz in the fourth — for his first win since July 31.

“Mostly just getting ahead with fastballs and changeups when I needed it,” Manaea said of his success despite allowing the homer to Cruz.

“Better to give up a 600-foot bomb than a wall-scrapper,” Manaea said. “Yeah, it was a mistake pitch and he definitely made me pay for it. It happens.”

The teams split the four-game series, with Nick Martinez earning his fifth save for the Padres by pitching a scoreless ninth inning.

“You look at Nick in the bullpen now and his velocity has ticked up, he was throwing 96 (mph) today,” Padres manager Bob Melvin said. “The bullpen has really benefitted, not only his stuff, but also velocity.”

Nationals starter Patrick Corbin (4-17) gave up two runs on nine hits in 5 1/3 innings for his sixth loss without a win since July 9.

After five scoreless innings, Corbin ran into trouble in the sixth. Brandon Drury hit a double, followed by Bell’s two-run shot into the right-field corner. Bell had been mired in a 1-for-33 hitting slump prior to his homer on Saturday.

“This is the guy we envisioned being in the middle of the order getting big hits,” Melvin said of Bell. “The last two nights if he doesn’t hit those two homers, we are looking at different games.”

Nationals: RHP Erick Fedde (right shoulder inflammation) is slated to return from the 15-day IL and start in the series opener in Seattle on Tuesday. Fedde has been on the IL since July 30, retroactive to July 27. ….INF Luis Garcia (left groin strain) left San Diego prior to Sunday’s game to begin a rehab assignment with Rochester. OF Yadiel Hernandez (left calf strain) was placed on the 10-day IL, retroactive to Aug. 19.