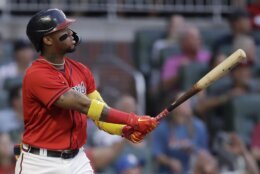 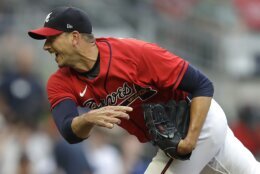 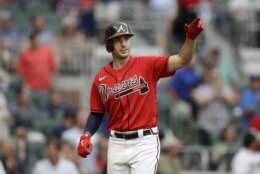 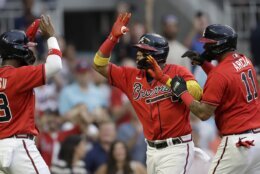 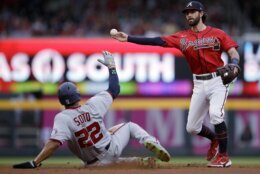 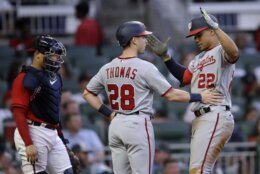 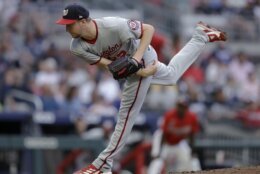 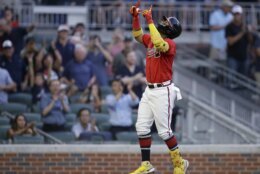 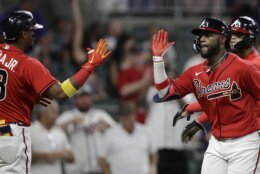 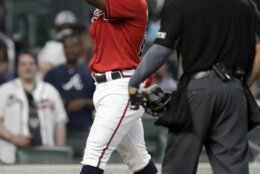 ATLANTA (AP) — The Atlanta Braves are one powerful bunch, and Matt Olson is enjoying the ride.

“Watching from afar these past couple of years I know there was a lot of power in this clubhouse, and it’s cool to be a part of it this year,” Olson said. “(Austin) Riley’s got a bunch of homers, but it’s not just one guy doing all the damage. You look at the lineup and everybody’s got power and a chance to do damage that day, which is cool and tough to game plan for.”

William Contreras also connected off Fedde for the defending World Series champions, who improved to an NL-best 27-8 since June 1. Second-place Atlanta also moved within 2½ games of the NL East-leading New York Mets.

The Braves have hit an NL-best 131 homers.

“That’s what we do,” manager Brian Snitker said. “That’s how we’re built. We hit homers and we strike out. It is what it is. It’s getting harder and harder to bunch hits with the arms we face and the velocities and what these guys are bringing every day. As long as it doesn’t stop, I’m all in.”

Charlie Morton (5-3) won his fourth straight decision, but his first since June 5 at Colorado. The 38-year-old right-hander allowed two runs and four hits in seven innings.

Harris hit a two-run double to left in the second to put Atlanta up 3-0. Acuña followed with his eighth homer, a massive three-run shot that stopped a 0-for-14 skid. The ball traveled 446 feet to left and was clocked at 109 mph off his bat.

“He’s really impressive,” said Olson, who was acquired in a March trade with Oakland. “Probably one of the best young players I’ve played with. His ability to hit, he’s got natural instincts in the outfield. Obviously able to cover a lot of ground. Steals bases. Hits for average, power. … He’s a special player.”

Acuña, the leading NL All-Star vote-getter, homered for the first time since June 21 against San Francisco. He is the first player since Albert Pujols in 2009-10 to lead his league in All-Star votes in consecutive seasons.

Harris added his own impressive drive in the eighth, a two-run shot to right. Harris’ seventh homer traveled 425 feet and came off his bat at 112 mph, sailing into the Chop House restaurant in the second level of right field.

Juan Soto hit a two-run shot for Washington in the third. It was Soto’s 16th of the season.

Soto has hit safely in 11 straight and is batting .405 with two homers and five RBIs during the streak.

“Everybody wants to see the results of the work that you put in,” Soto said. “I think it’s coming out right now. I feel pretty good right now at the dish, and I’m seeing the ball well. The pitchers know it.”

Morton struck out seven and walked three while improving to 3-0 with a 2.63 ERA in his last four starts against Washington.

Fedde (5-6) dropped to 0-6 with an 11.03 ERA in nine career starts and one relief appearance against Atlanta. He gave up eight hits and eight runs in three-plus innings.

Washington has lost eight of nine to stay in last place in the division.

Snitker will participate in his second All-Star Game but his first as manager after winning the World Series last season. Snitker said he didn’t hesitate to ask Martinez and Dodgers manager Dave Roberts to serve as his coaches.

“I started thinking (Martinez) didn’t get a chance to celebrate it,” Snitker said. “I mean they won a world championship, and COVID hit. That’s what I told him. I’ve known Davey a long time. ‘You’re a World Series champion and you never had a chance celebrate (at the All-Star Game),’ and I wanted to give him a chance to be on the staff. I called over and asked him on the field in Washington (three weeks ago) and he said yes immediately.”

Snitker chose Roberts after the latter named him to the staff for the 2019 game at Cleveland. This year’s game is at Dodger Stadium.

Nationals: RHP Aníbal Sánchez was scheduled to make his third rehab start for Triple-A Rochester on Friday. Sánchez, sidelined all season with a cervical nerve impingement in his neck, could return to the rotation next Wednesday at home against Seattle.

Braves: RHP Kenley Jansen (irregular heartbeat) threw off a mound, and Snitker said he is making progress toward returning from the 15-day injured list early next week. … LF Adam Duvall is on the paternity list and will return to the team on Monday. 1B Mike Ford was called up from Triple-A Gwinnett.

The Braves announced a crowd of 41,725, the 21st sellout of the season. Most of them left during a 75-minute rain delay in the bottom of the eighth and missed Marcell Ozuna’s two-run single off Washington’s Alcides Escobar, a shortstop filling in on the mound.