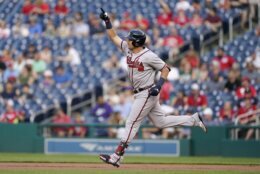 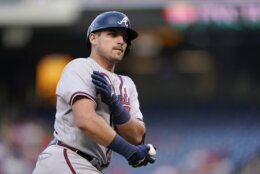 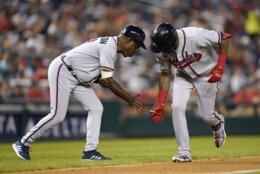 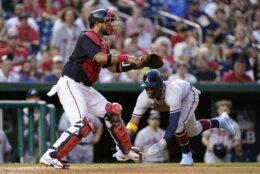 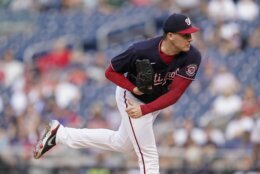 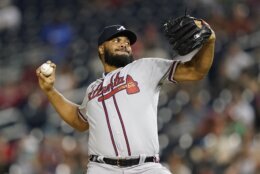 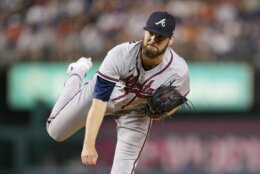 Atlanta improved to 9-2 against the Nationals this season and extended its winning streak in Washington to a franchise-record 13 games. The Braves have won six of eight overall, while the Nationals lost for the 14th time in 15 games.

Left-hander Patrick Corbin (4-12) dropped his ninth consecutive start against Atlanta. Washington has the worst record in the majors at 30-62 and is 7-35 against NL East opponents this season.

“We’re playing really good right now, and for me personally to go into the break on this kind of note, I feel good,” Anderson said. “Body feels good, arm feels good. Hopefully I can keep it going once we get back.”

The Nationals scored three runs against Will Smith in the ninth, including one on a wild pitch by A.J. Minter. But after loading the bases again with a walk, Minter struck out Keibert Ruiz for his fifth save.

“He’d had five days off, so we need to get him out there and pitch,” Atlanta manager Brian Snitker said of Smith. “They miss-hit some balls that fell right in front of us. Minter came in and did a really good job and put it down.”

The Braves pounced on Corbin in the first. After Dansby Swanson reached on an error with one out and scored on Matt Olson’s single, Riley launched his 26th homer of the season over the visitor’s dugout to make it 3-0. He’s hitting .413 with six homers and 12 RBIs during his 11-game hitting streak and ranks second in the NL in homers behind Philadelphia’s Kyle Schwarber.

“I can’t believe he’s not an All-Star,” Anderson said. “Everyone is saying he turned it on a little too late, but he’s right in the MVP talks again and it’s just a steady, steady effort. Every day he has a chance to get two or three hits and knock one out of the ballpark.”

Olson added RBI singles in the second and the fourth, and Arcia homered in the fifth to continue his season-long trend of tormenting Washington. Arcia is hitting .483 (14 of 29) against the Nationals this year, including three of his four homers.

Corbin matched Washington’s Joan Adon, who is currently in the minors, for the major-league lead in losses. The left-hander allowed six runs, five earned, and nine hits in five innings while striking out eight. He is the first pitcher to lose nine consecutive starts to a team since Kansas City’s Danny Duffy dropped 10 in a row to Cleveland from 2015-19. He has a 7.28 ERA against the Braves in that span.

Duvall homered in the ninth off Kyle Finnegan, his second in three games since returning from the paternity list.

Nationals: DH Nelson Cruz left with quad tightness after two plate appearances. He singled in the second and struck out in the fourth.

The left-hander, a two-time All-Star who pitched 5 1/3 scoreless innings before going on the injured list April 20, is expected to be out between five and six months.

“I don’t feel good about getting surgery (but) I feel good that this has been the right course of action for me right now at this point in my career, at this point in this process with my elbow,” Doolittle said. “As far as I’m looking at it, 2023 starts right now. I’m viewing this as a long, extended ramp-up into the season last year.”

Nationals: RHP Paolo Espino (0-2, 3.42) is 0-2 with a 4.85 ERA in six starts since joining the rotation. He gave up two runs in four innings against Atlanta on Sunday.