Jazz Chisholm bunted for a single on the first pitch of Stephen Strasburg's return from a one-year absence, stole second and the Marlins kept on going in a 7-4 win over the Washington Nationals on Thursday night that finished a three-game sweep.
Listen now to WTOP News WTOP.com | Alexa | Google Home | WTOP App | 103.5 FM
(1/10) 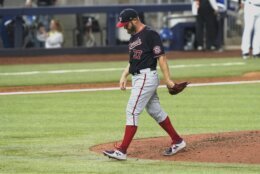 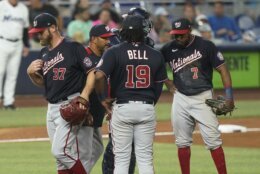 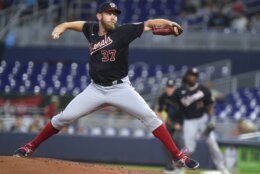 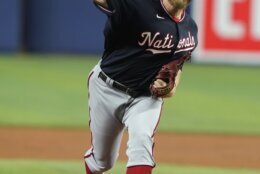 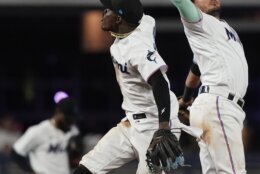 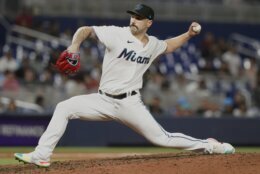 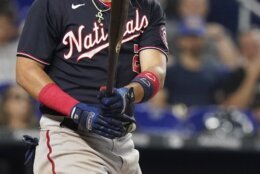 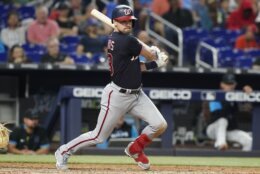 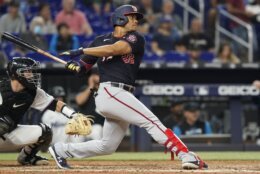 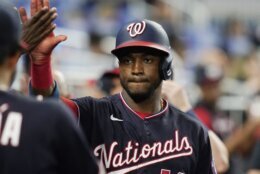 MIAMI (AP) — Jazz Chisholm bunted for a single on the first pitch of Stephen Strasburg’s return from a one-year absence, stole second and the Marlins kept on going in a 7-4 win over the Washington Nationals on Thursday night that finished a three-game sweep.

The 33-year-old right-hander, pitching on the 13th anniversary of Washington selecting him with the first overall pick in the amateur draft, allowed seven runs, eight hits and two walks in 4 2/3 innings.

“It felt good, and I’m excited to learn from it and get back out there for the next one,” Strasburg said. “Fastball command could have been better in certain spots there. I felt the changeup was working pretty well. All in all, it’s a place to start and try to build off of it.”

Strasburg (0-1) struck out five and hit a batter, throwing 63 of 83 pitches for strikes while averaging 91.9 mph with his fastball.

“He didn’t throw 93-94 (mph) but his fastball had ooofff at the end of it,” Nationals manager Dave Martinez said. “There was late action. Now it’s a matter of getting back out there every five days and getting him going.”

The three-time All-Star and 2019 World Series MVP had not pitched in a major league game since June 1 last year, spending much of the time recovering from surgery on July 28 to correct thoracic outlet syndrome, a compression of nerves, arteries or veins near the neck or armpit. He had made three minor league rehabilitation starts.

“It feels great to be back and able to perform,” said Sánchez, who sat out Wednesday because of back stiffness. “Now that we’re here, we have to hustle and keep going.”

Chisholm scored on Sánchez’s RBI double and Jon Berti followed with a two-run single for a 3-0 lead in the first. Miami entered with 13 first-inning runs — only Detroit with 12 had fewer.

“Guys did a good job of getting on base, and getting some key hits and we were able to stretch it out,” Marlins manager Don Mattingly said.

Juan Soto hit a two-run single in the fifth before Miami chased Strasburg in a four-run bottom half that include Cooper’s RBI double, Jesús Aguilar’s run-scoring single and Sánchez’s two-run homer.

Anthony Bass got the final out in the seventh and pitched a scoreless eighth. Tanner Scott closed with a perfect ninth for his third save.

“He just ran through a stop sign,” Mattingly said. “Obviously, you love his aggressiveness but fortunately, it worked out.”

The Nationals optioned LHP Sam Clay to Triple-A Rochester for Strasburg’s spot in the roster. Clay lasted one day with the club as he was recalled Wednesday after Washington optioned RHP Joan Adon to Triple-A.

Nationals: DH Nelson Cruz (back stiffness) was a late scratch and will have an MRI Friday, Martinez said. 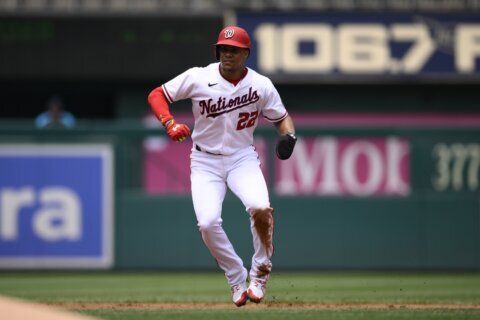