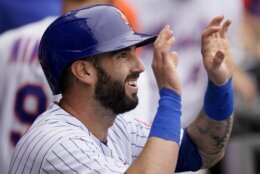 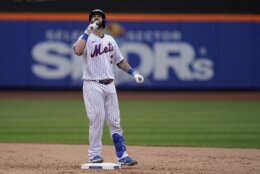 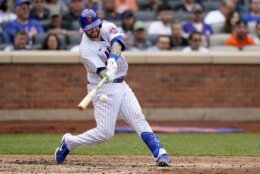 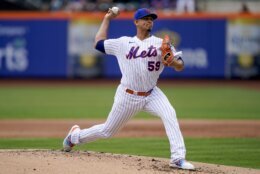 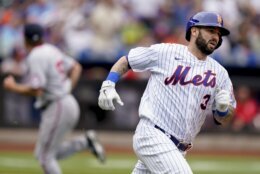 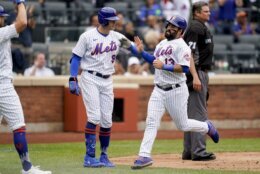 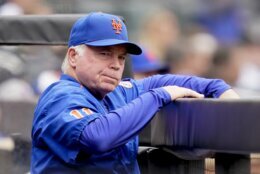 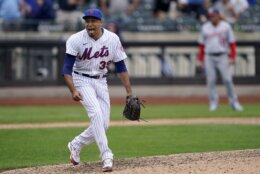 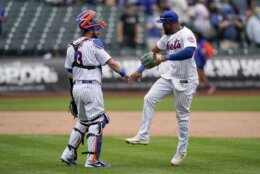 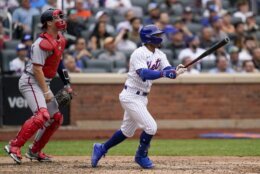 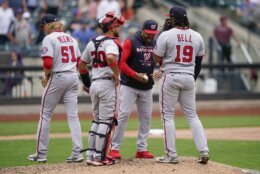 NEW YORK (AP) — Pitching for the first time in the majors with his father in the stands, Carlos Carrasco wanted to come through.

Well, he certainly did. Just about everyone in a New York Mets uniform is doing that these days.

Carrasco combined with three relievers on New York’s second consecutive shutout, Tomás Nido went 4 for 4 with three RBIs at the bottom of the batting order and the Mets beat the Washington Nationals 5-0 Wednesday to polish off a perfect homestand.

“We’re playing good baseball, regardless of who steps in,” shortstop Francisco Lindor said.

Lindor extended his RBI streak to 10 games, matching Hall of Famer Mike Piazza for the second-longest in franchise history. New York went 6-0 against NL East foes Philadelphia and Washington for its first undefeated homestand of six or more games since a 10-0 run in April 2015.

On deck, a much stiffer test.

The first-place Mets, riding their longest winning streak of the season, head to California for a 10-game trip against the Dodgers, Padres and Angels that starts Thursday night.

“It’s going to be a good challenge, but I think we are prepared,” Carrasco said.

Carrasco’s father, Luis, planned to arrive from Colombia in time to see his son pitch last Friday against the Phillies, but his flight was delayed. They were able to enjoy Wednesday’s win together, though, with Carrasco’s dad celebrating right alongside the smiling pitcher and his teammates in the clubhouse.

“It was really emotional,” said the 35-year-old Carrasco, in his 13th big league season. “It was really fun. Really special what the guys did for me.”

Minus injured aces Max Scherzer and Jacob deGrom, the Mets (35-17) are 18 games over .500 for the first time since ending the 2015 regular season 90-72 on the way to their last World Series appearance. They began the day with a 10 1/2-game lead in the NL East, tied with the 1971 San Francisco Giants for the largest in National League history entering June.

“I think this goes back to spring training,” Nido said. “We knew this team was built to win, and from day one everybody’s come to work.”

Nido had an RBI single in the fourth inning, and another run scored on the play when center fielder Dee Strange-Gordon fumbled the ball for an error. Lindor hit a sacrifice fly that scored Nido in the seventh, and the light-hitting catcher added a two-run double in the eighth to set a career high for hits.

Nationals left-hander Evan Lee (0-1) lasted 3 2/3 innings in his big league debut after getting called up from Double-A Harrisburg. He allowed two runs and four hits with three walks.

“I like what I saw,” Nationals manager Dave Martinez said. “He’s got good stuff. So he’ll probably get another opportunity in five days to go back out there and start again.

“I thought he did a really good job of handling himself.”

Working carefully to the few thumpers in Washington’s lineup, Carrasco (6-1) matched his career high with five walks and pitched out of trouble all afternoon against the last-place Nationals. He needed 95 pitches to get through five innings but stranded eight runners.

It was New York’s ninth shutout this season, most in the majors, and it followed a 10-0 whitewash of Washington on Tuesday night. The Mets are 13-2-1 in series this year — though their only two sweeps came on this homestand. The six-game winning streak marks their longest of the year.

“Our pitching staff was unbelievable this series,” Nido said. “Just executing in situations with men on base. No matter who’s on the other side, we try to jam it down their throat and get the job done.”

In a radio interview, Nationals president of baseball operations and general manager Mike Rizzo said the team won’t trade Juan Soto, its star right fielder. Rizzo told The Sports Junkies on 106.7 The Fan that Washington plans to build around the 23-year-old slugger, who can become a free agent following the 2024 season.

Nationals: Veteran SS Alcides Escobar was placed on the 10-day injured list with a strained right hamstring after getting hurt Tuesday night making a diving stop. Washington recalled 22-year-old Luis García from Triple-A Rochester and plans to play him every day at shortstop. What that means for Escobar’s future with the rebuilding Nationals is uncertain. Martinez said that will be a conversation for when Escobar gets healthy. García, who played in 110 major league games over the past two seasons, went 1 for 4 with three strikeouts. … Nelson Cruz was back in the lineup at DH after sitting out Tuesday night with a bruised left ankle.

Mets: CF Brandon Nimmo returned to the leadoff spot after missing four straight starts with a sore right wrist. … 2B/LF Jeff McNeil was rested. … The next step for RHP Tylor Megill (biceps inflammation) is probably a minor league rehab outing, and he might need just one or two before rejoining the rotation. Megill threw a simulated game Tuesday.

Nationals: Rookie RHP Joan Adon (1-8, 6.08 ERA), tied with teammate Patrick Corbin for the major league lead in losses, pitches Thursday night at Cincinnati in a matchup between the two worst teams in the National League. Rookie RHP Graham Ashcraft (1-0, 1.69) makes his third major league start for the Reds in the opener of a four-game series.