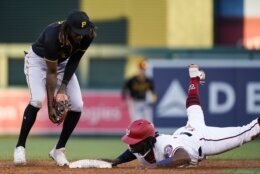 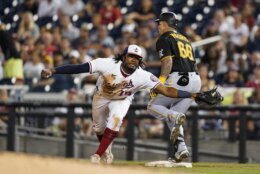 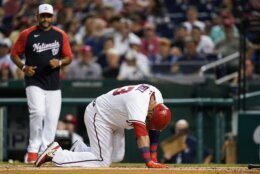 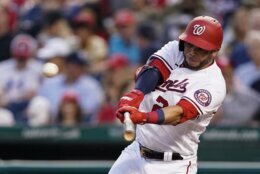 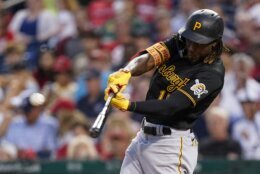 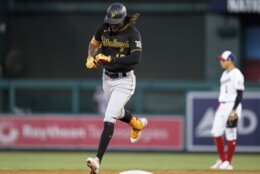 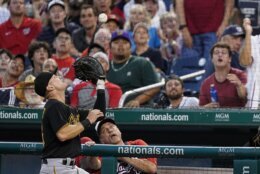 WASHINGTON (AP) — Maikel Franco hit a go-ahead, two-run home run in the eighth inning, and the Washington Nationals beat the Pittsburgh Pirates 3-2 Monday night in the opener of a three-game series.

“I just thought about seeing the ball and driving the ball to get a hit to try to tie the ballgame, and I got a better result,” Franco said.

Luis García had three hits for Washington, which has won five of its last seven games.

Top prospect Oneil Cruz hit his first homer of the season for Pittsburgh, which has lost the first four games of its road trip by a combined five runs.

Pirates reliever Chris Stratton (4-4) was an out away from working around García’s leadoff double in the eighth when Franco launched a first-pitch slider to left-center, giving the Nationals their first lead of the night.

“He threw him a hanging breaking ball, and in that situation we have to execute a pitch and we did not,” Pittsburgh manager Derek Shelton said.

The 6-foot-7 Cruz — who homered during a two-game stint last October when he became the tallest shortstop in major league history — lashed Erick Fedde’s 3-1 cutter into the front row in right-center in the fifth inning to give the Pirates a 2-0 lead.

“This kid has unbelievable power,” Shelton said. “He hits the ball so dang hard. I thought it was going to be a double and it just continued to go.”

Washington got a run back in the sixth on Yadiel Hernandez’s RBI grounder.

Fedde allowed two runs in five innings and struck out four. He’s pitched at least five innings in four consecutive starts for the first time since an eight-start streak from April 17-June 18, 2021.

“It’s definitely frustrating, but over my last three starts, I feel like I’ve at least given the team three opportunities to win,” Fedde said. “If I’m working on stuff and that’s still the result, I can’t be that upset at the end of the day.”

“I was either going to head to Florida or head to see my farm (in Tennessee),” Martinez said. “So my plans changed.”