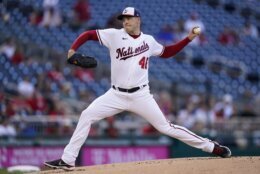 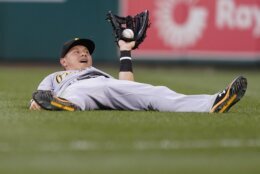 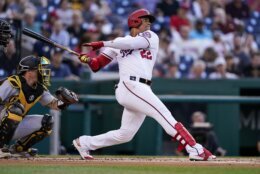 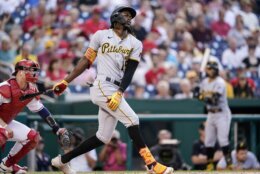 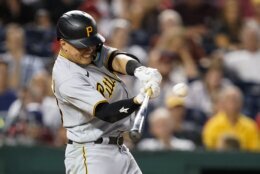 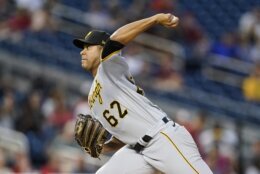 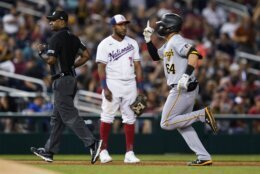 Corbin (4-10) allowed one run in eight innings for Washington, which has won three in a row and six of eight.

“I know I can still do it,” the 32-year-old Corbin said. “My stuff is still there. Sometimes, and I don’t know the reason, things haven’t clicked. I thought today when I did make a couple mistakes, they either fouled it off or maybe just took it.”

Pittsburgh has lost five in a row by a combined seven runs.

“We’re one play away, and right now the people we’re playing are making that play and we have to create our own breaks,” said Pirates manager Derek Shelton, whose team is 0 for 12 with runners in scoring position in the last two games.

The Nationals also sputtered with runners in scoring position much of the game, going hitless in their first eight attempts before Hernandez pinch hit against former Washington prospect Wil Crowe (3-5) with two on and two outs in the eighth. Hernandez hit a shot over Diego Castillo in right, scoring both runners.

Washington was 2 for 22 with runners in scoring position in the first two games of the series and won both. The other hit was Maikel Franco’s two-run homer in the eighth in Monday’s 3-2 win.

Even without the late rally, it was an encouraging night for the Nationals solely because of Corbin’s outing. The veteran yielded Castillo’s solo homer in the sixth, but was otherwise far sharper than he’s been for much of the last three seasons. He allowed five hits and walked two.

Corbin, who hadn’t posted a double-digit strikeout game since 2019, struck out the side in the eighth to finish his night. It was the third time he struck out 12 in a regular-season game and the first since June 22, 2018, at Pittsburgh. Corbin also struck out 12 in Game 4 of the 2019 NLCS against St. Louis.

“I’ve been feeling really good, and the results (have been) some ups and downs,” Corbin said. “I thought today I was able to stay on the attack and able to use both sides of the plate. The slider was good.”

Tanner Rainey worked the ninth for his 11th save in 14 attempts.

The Nationals pushed across a run in the first on Nelson Cruz’s groundout. It was all they would get against Pittsburgh starter José Quintana, who allowed four hits and struck out six in six innings in the first start of his 11-year career in Washington.

Pirates: Pittsburgh recalled LHP Aaron Fletcher from Triple-A Indianapolis and optioned RHP Miguel Yajure to Indianapolis. … RHP David Bednar (lower back) was not available. “We hope it’s not an IL situation,” Shelton said. “We think he should be back in the coming days.” … RHP Zach Thompson (forearm nerve inflammation) threw live batting practice. Shelton said Thompson is on track to be activated Sunday.

Nationals: SS Luis García was out of the lineup for the first time since his June 1 callup, but entered as a pinch hitter in the eighth. “He’s been playing well and he’s been playing a lot,” manager Dave Martinez said. “You have to remember, he played every day in Triple-A before he got here.” … LHP Josh Rogers (shoulder impingement) will begin his rehabilitation assignment Thursday at Triple-A Rochester. … Martinez said RHP Victor Arano (knee inflammation) felt good a day after a light bullpen session.