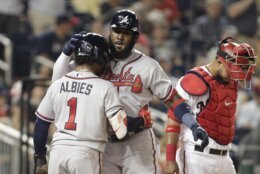 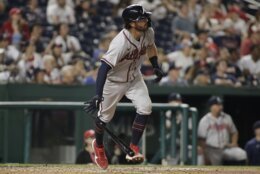 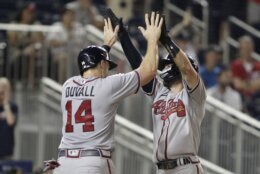 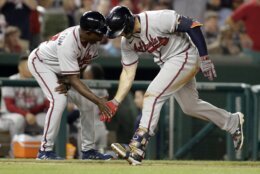 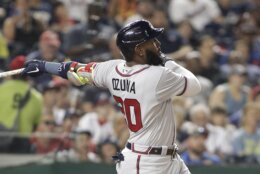 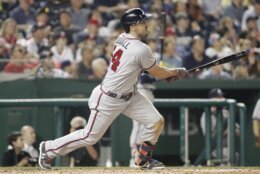 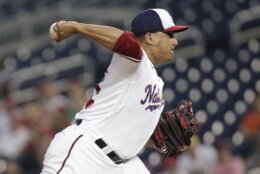 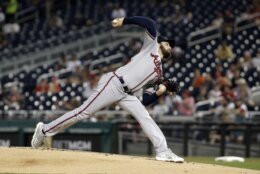 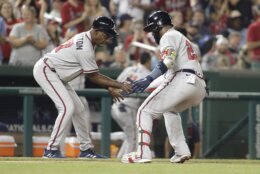 Swanson hit one of Atlanta’s season-high five homers and drove in four runs. Marcell Ozuna and Adam Duvall launched back-to-back homers for the defending World Series champions, whose winning streak is the longest in the majors this season.

“We’ve been swinging the bats really well,” Swanson said. “We’ve got a lot of guys. It’s a deep lineup and we just continue to come at you 1 through 9.”

Michael Harris hit his first career home run and Travis d’Arnaud also went deep for the Braves, who have 27 homers during their winning streak.

The start was delayed 93 minutes by rain.

Albies fell on his way out of the batter’s box on a groundout to shortstop in the fifth inning. He exited the game, and the team later announced he has a fractured left foot.

“Hate it for Ozzie. Hate it for us,” said Braves manager Brian Snitker, who didn’t know how long Albies will be sidelined. “He’ll be fine. He’s young, he’ll heal quick. Like I said, I just hate it for the kid because he loves to play baseball and he’s such a big part of our club. It’s a chance for somebody else to do something good.”

Lane Thomas homered and singled for the Nationals.

The bad news began Monday afternoon for Washington when manager Dave Martinez announced that right-hander Stephen Strasburg is headed back to the injured list after feeling discomfort following a bullpen session.

The 33-year-old Strasburg has made one start this season, his first since he had surgery for thoracic outlet syndrome last summer. He had been scheduled to start Tuesday night against the Braves.

Staked to a 6-0 lead, Braves starter Ian Anderson couldn’t make it through the fifth, leaving with no outs and the bases loaded in a 6-2 game. Dylan Lee came on and gave up an RBI single to Nelson Cruz and an RBI groundout to Josh Bell.

Nationals starter Erasmo Ramirez (1-1) was a late replacement for Josiah Gray, who had warmed up in the bullpen before the rain delay. Ramirez allowed six runs and six hits over three innings in his first start since 2018.

“I thought Erasmo gave us some length. He really did,” Martinez said. “I thanked him for it because it was a tough situation. Twenty minutes before the game you’re getting told you’re gonna start. He gave us everything he had.”

D’Arnaud homered leading off a three-run second. In the third, Albies walked and, one out later, Ozuna and Duvall went back-to-back.

Swanson hit a two-run homer in the sixth to make it 8-4, and Harris’ drive capped the scoring in the eighth.

“I can’t remember what I had for breakfast, let alone what happened back then,” Snitker said of the 2013 winning streak, during which he was Atlanta’s third base coach.

Braves: Orlando Arcia replaced Albies at second base in the bottom of the fifth. Albies, a two-time All-Star, is hitting .244 with eight homers and a .694 OPS in 62 games this season. The 25-year-old batted .259 with a career-high 30 homers and a .799 OPS last season.

Nationals: Strasburg, who made his season debut Thursday against the Marlins, had an MRI on Monday. Martinez did not have an update after the game. … RF Juan Soto was lifted for a pinch-hitter in the ninth after slipping and banging his knee on the corner of the dugout bench. “He said he could go out there (in the field for the ninth) but he was limping pretty good,” Martinez said. “He came in and said he started getting really sore so I didn’t want to chance it, and we’ll see how he feels tomorrow.”

Nationals: RHP Jackson Tetreault will be called up from Triple-A Rochester to make his major league debut Tuesday, pitching in place of Strasburg. Tetreault is 5-3 with a 4.19 ERA in 12 starts for the Red Wings.