WASHINGTON (AP) — Taijuan Walker stood astride Juan Soto after tagging him out during a collision at third base that…
Listen now to WTOP News WTOP.com | Alexa | Google Home | WTOP App | 103.5 FM
(1/8) 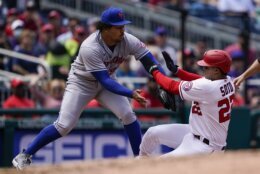 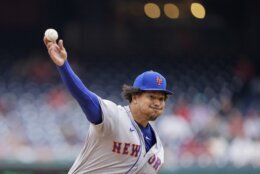 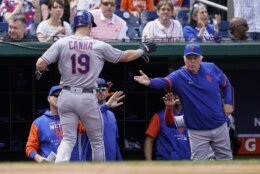 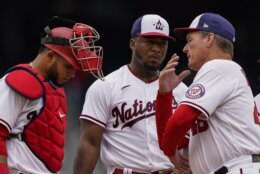 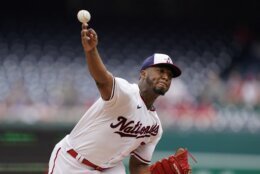 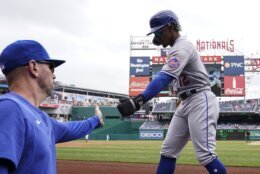 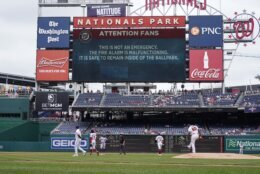 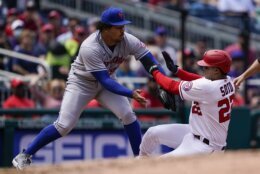 WASHINGTON (AP) — Taijuan Walker stood astride Juan Soto after tagging him out during a collision at third base that the Washington Nationals slugger felt was more violent than it needed to be.

Walker and the New York Mets are punishing the NL East.

Walker pitched seven innings of no-fuss, scoreless ball, and the Mets remained unbeaten in 10 series this season, cruising past the sloppy Nationals 4-1 on Thursday.

The burly right-hander tagged Soto at third after the Nationals’ best hitter made an elementary baserunning gaffe, getting himself into a rundown after Josh Bell hit a grounder to the left side. Soto slid into Walker’s forearm a few feet in front of the bag and argued for an obstruction call, but Walker already had the ball when Soto got there.

“It was unexpected. I got a little mad because it was a rundown and I didn’t think he was going to slide into me,” Walker said. “Smart play, I guess, the guy was going to second, but in the moment I wasn’t too happy about it.”

After tagging Soto, Walker threw wildly to second base, and right fielder Starling Marte threw back to third to nail Bell and end the Nationals’ best chance to rally.

“Things like that, when we’re behind like that, those are not good baserunning decisions,” Washington manager Dave Martinez said. “We need to make better decisions.”

Mark Canha went 3 for 4 with a homer and three RBIs for the first-place Mets, who took two of three from the last-place Nationals. New York has won nine series and split one, and hasn’t lost two straight games in a month.

“We have a hitter of the day. We give the award out when we come in,” Canha said. “Today it was me, and then, what’s cool about this team is, I feel like, I’m pretty sure all our hitters have won the award at some point this year. … Someone always is the hero, and that’s been the coolest part of this year.”

Walker (1-0) allowed three hits, walked one and threw 85 pitches in the longest of his four starts this season, which was interrupted by a stint on the injured list with right shoulder bursitis.

Seth Lugo struck out two in the eighth and Edwin Díaz allowed Soto’s two-out homer in the ninth before retiring Bell to complete the four-hitter.

Soto said he was at fault on the rundown play, which came after he opened the fourth inning with a double off the wall in right-center.

“I was just caught in the middle of nothing,” he said. “I tried to slide. I didn’t try to hurt him or anything like that. He’s got to give me room to at least slide on the base.”

The Mets only managed five hits, but they went ahead 2-0 in the first inning on Canha’s bases-loaded single. New York took advantage of wild Nationals starter Joan Adon (1-6), who walked five of the first 10 batters he faced.

Tomás Nido added a run-scoring single with two outs in the fourth that chased Adon, who also hit J.D. Davis in the back with a fastball — the 24th time a Mets batter has been hit this season, which leads the majors.

“For what it’s worth, he gave us 80-something pitches,” Martinez said of his rookie starter. “It could have been even uglier than that. It could have destroyed our bullpen for the weekend. But he battled as far as he could battle.”

Canha homered in the ninth off Steve Cishek.

Mets: C James McCann was held out of the lineup with a sore left wrist.

Nationals: SS Alcides Escobar missed a third straight game with infection under the nail on his left index finger. Martinez said the finger has been drained multiple times but Escobar is not expected to go on the injured list.

Nationals: Josiah Gray (4-2, 3.45) starts the opener of a weekend series against Houston.