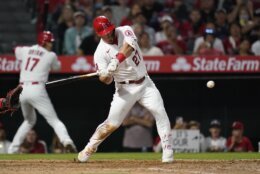 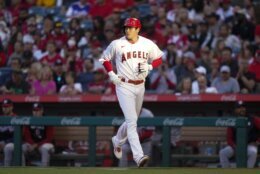 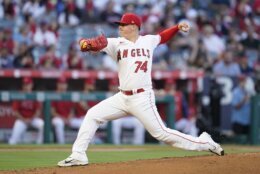 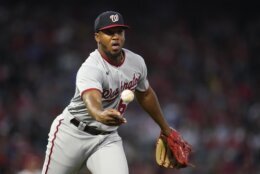 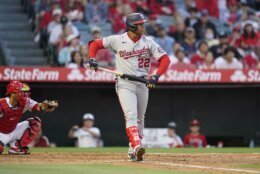 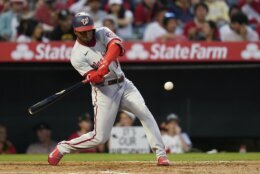 ANAHEIM, Calif. (AP) — Mike Trout is in his second decade of delivering clutch hits and catalyzing the Los Angeles Angels’ offense. For most of that first decade, his teammates on the mound weren’t consistently good enough to turn enough of Trout’s big hits into wins.

These Angels just might be different: When Trout came through with his latest huge hit in the fifth inning Friday night, five pitchers comfortably made it stand up yet again.

Trout hit a two-run double and Jhonathan Díaz tossed five spotless innings in his first start of the season, leading the surging Angels to a 3-0 victory over the Washington Nationals.

After Díaz impressed his teammates by winning a key showdown with Juan Soto, the bullpen coolly finished the Angels’ fifth shutout of the year and second in a row — the first back-to-back shutouts for the normally pitching-poor Halos since July 2016. Raisel Iglesias threw a perfect ninth on six pitches for his seventh save.

Trout loved to see it all.

“You can’t ask for much more than that (from Díaz),” Trout said. “You just can’t. He took advantage of the opportunity and showed us what he had. … It’s been great. The whole pitching staff has been great. It’s been fun to play behind in center field, and we’ve had some quick games as well, so that’s always a plus.”

Shohei Ohtani also drove in a run for the Angels in their third consecutive victory and 10th in 13 games, including six straight at Angel Stadium. The AL West leaders opened a six-game homestand by moving eight games above .500 for the first time since June 2018.

Anthony Rendon went 0 for 4 with two strikeouts and grounded into an inning-ending double play with the bases loaded in his first game against the Nationals since leaving them to sign a seven-year, $245 million free-agent deal with the Angels in December 2019.

The Nationals managed four hits while getting shut out for the second time. They’ve lost three straight and 12 of 15 as they began the final series of their nine-game road trip.

Díaz (1-0) yielded three hits and four walks, striking out four while taking the rotation spot of struggling Jose Suarez, who was sent down to Triple-A Salt Lake.

“We chased a lot down in the zone,” Nationals manager Dave Martinez said. “His breaking ball is really, really good, and we chased it.”

Díaz, who made his major league debut last September, mostly stayed out of trouble after giving up a double on his first pitch. The Venezuelan left-hander even got Soto to slam his bat on the ground in frustration after striking out on a nasty slider in the fifth.

“He was very good, very composed,” Angels manager Joe Maddon said of Díaz. “He’s a little bit sharper this (season). There’s a possibility he’s going to get another shot (in the rotation).”

Joan Adon (1-5) struck out six over five innings of three-hit, three-run ball for the Nats.

“He threw the ball well except for the (five) walks,” Martinez said. “That’s a tough lineup. I told him, ‘(When) you get strike one, you’re nasty.’”

Los Angeles led in the first after Taylor Ward drew a leadoff walk and scored on Ohtani’s groundout for the AL MVP’s 14th RBI of the season.

The Angels loaded the bases in the fifth for Trout, who crushed a 108 mph line drive off the base of the center-field wall.

“You have a future Hall of Famer come up, you get up 0-2, and then the ball leaks over the plate,” Martinez said.

Rendon was the sixth overall pick in the 2011 draft by Washington, and he played seven increasingly impressive seasons that culminated in his only All-Star selection in 2019, when he led the majors in RBIs and propelled the Nationals to their first World Series title.

Like most of Angels owner Arte Moreno’s expensive purchases, Rendon hasn’t come close to matching his previous form after joining the Halos. But the Houston native shows flashes of elite talent at the plate while remaining a superb fielder at third base.

Nationals: DH Nelson Cruz went 1 for 4 after missing the previous two games with back stiffness.

Angels: Utilityman Jose Rojas was sent down to make room for Díaz.

Michael Lorenzen (3-1, 3.04 ERA) looks to extend an impressive start to his first season with the Angels and his first big league season as a starter. He faces former Dodgers prospect Josiah Gray (3-2, 3.12 ERA), who pitched six scoreless innings of one-hit ball in San Francisco last weekend.