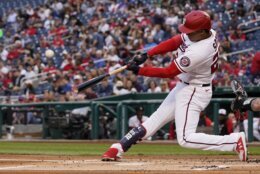 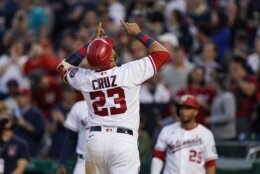 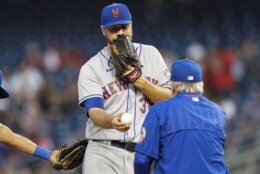 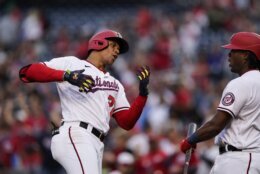 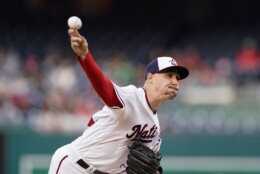 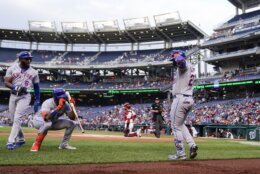 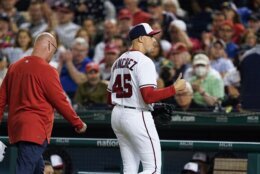 WASHINGTON (AP) — Nationals manager Dave Martinez had seen encouraging signs from Nelson Cruz, who was signed in the offseason to provide veteran muscle behind Juan Soto but has struggled thus far. Soto said Cruz’s consistently positive attitude has buoyed the team during its difficult start.

Both were thrilled to see what Cruz did on Wednesday night, a no-doubt three-run blast to left-center field as the Nationals jumped on Tylor Megill and the first-place New York Mets in an 8-3 victory.

“It was a long way,” Soto said of Cruz’s homer, which traveled an estimated 436 feet. “It’s great to see him hitting the ball like that.”

Soto hit a two-run homer in the Nationals’ five-run first inning as Washington sent Megill to the earliest exit of his career.

“He’s got a pretty good fastball. I know he’s going to throw it,” Soto said. “He threw me four in a row, and I won’t let him throw me five in a row by me.”

Cruz, who came in batting .170 with three homers, followed in the second with his 453rd career longball, passing Carl Yastrzemski for 39th all-time.

Megill (4-2) walked the next batter and his night was over. He recorded four outs while allowing eight runs on eight hits with a walk and a hit batter, losing his second straight start as his ERA swelled from 2.43 to 4.41. The second-year right-hander’s previous shortest outing came Sept. 15, when he allowed six runs in three innings in a loss to St. Louis.

“An outing like this, as bad as it went, just can’t really dwell over it,” Megill said. “Obviously it was a bad outing, but I’m capable of way more. I’m not going to let this one define me.”

Staked to a big lead, Aaron Sanchez (2-2) pitched to contact, retiring the side on 11 pitches in the third inning, 10 in the fourth and six in the fifth. He didn’t strike out a batter until he fanned Francisco Lindor leading off the sixth. Pete Alonso then hit a comebacker that struck Sanchez in the heel of his glove hand, ending his longest start of the season.

“Hand’s good, no broken bone,” Sanchez said. “It’s going to be swollen, it’s going to hurt, but I’ll be fine.”

Alonso hit a two-run homer in the first, his eighth this season, to give the Mets a 3-0 lead that quickly vanished.

“I’m trying to go out there and get guys out in three pitches or less,” Sanchez said. “Get my hitters back in the dugout as fast as I can, get them in that groove, keep that groove.”

NL East-leading New York lost by five or more runs for the third time this season and will have to win Thursday’s rubber game against its last-place rival to avoid dropping a series for the first time. The Mets have won eight series and split one.

“I think we’ve proved that if the game’s still going, we have a chance,” Nogosek said. “I knew if I went out there and put up zeroes, kept us in the ballgame, there was a chance that we could win that game.”

Washington relievers Austin Voth, Victor Arano and Paulo Espino kept the Mets off the board for 3 2/3 innings.

Nationals second baseman César Hernández made a leaping grab of Starling Marte’s liner to end the seventh. He also had three hits from the leadoff spot. His one-out single in the third was Washington’s last hit of the game.

Mets: RHP Sean Reid-Foley had Tommy John ligament-replacement surgery on Wednesday and will rehab in hopes of returning in 2023.

Nationals: SS Alcides Escobar was out of the lineup for a second straight day because of an infection under the nail on his left index finger. … RHPs Stephen Strasburg (recovery from thoracic outlet syndrome surgery) and Joe Ross (right elbow bone spur removal) reported no issues after throwing simulated games at extended spring training in Florida.

New York’s Taijuan Walker (0-0, 4.91 ERA) and Washington’s Joan Adon (1-5, 6.99) are the starters for Thursday’s series finale. Walker has faced the Phillies in each of his three starts this season, which was interrupted by a stint on the injured list with right shoulder bursitis. Adon allowed four runs in 4 1/3 innings in his season debut, a loss to the Mets on April 9.