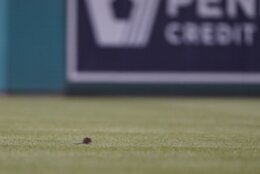 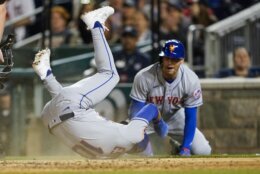 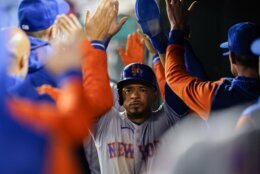 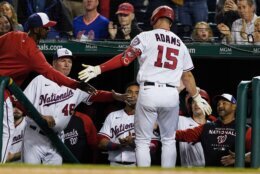 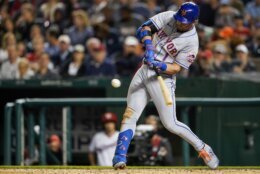 WASHINGTON (AP) — There was no question this rat was for real. So, too, are these New York Mets.

A critter scurried through the outfield grass just before James McCann’s sacrifice fly drove in the go-ahead score during a three-run sixth inning Tuesday night, Jeff McNeil contributed two RBIs and a key throw to the plate, and Carlos Carrasco nearly pitched into the eighth again, helping the Mets beat the Washington Nationals 4-2.

The sight of a creature drew gasps from some spectators, cheers from others, in an announced crowd of 21,955 at Nationals Park, where fans were encouraged to bring their dogs to the game.

“The rat was lucky it was Pups in the Park tonight and not Cat-urday!” team spokeswoman Jennifer Mastin Giglio joked in a text message.

The episode brought to mind one from a year ago — May 8, 2021, to be exact — involving a Mets club on the way to a disappointing 77-85 finish: McNeil and Francisco Lindor got into an argument during a game after they combined to flub a grounder. Soon after, Mets players rushed into the tunnel near the dugout.

Here was Lindor’s explanation that day: “I was like, ‘I’ve never seen a New York rat.’ So we went down, sprinting. I wanted to go see a New York rat, and (McNeil) got mad at me and was like, ’It’s not a rat, it’s a racoon.’”

Hmm. Regardless, this time, there was no doubt what was going on — even McNeil confirmed, “That was a rat” — during an eventful top of the sixth.

It began with the last-place Nationals ahead 2-0 thanks to Maikel Franco’s RBI double — McNeil’s relay easily beat Yadiel Hernandez as he tried to score from first — in the fourth, and Riley Adams’ solo shot in the fifth.

That was all Carrasco (3-1) gave up in 6 2/3 innings; he began the day as the only pitcher in the majors who had gone more than seven innings in at least two starts.

In the sixth, once Nationals starter Patrick Corbin had been replaced by new call-up Carl Edwards Jr., New York broke through, showing why it is now 21-10.

“We’re playing some really good baseball,” McNeil said. “Super happy with how we’re playing. … We’re going to keep that up throughout the year.”

The Mets loaded the bases off Edwards (0-1) with two singles and a walk, and McNeil brought in a pair of runs by ripping a ball that ricocheted off first baseman Josh Bell.

“I felt great,” Edwards said. “The results weren’t what I wanted.”

McCann’s sacrifice fly made it 3-2 and elicited “Let’s go, Mets!” chants from their fans in the stands.

After Lindor made a terrific diving stop and throw to get Franco on a grounder in the seventh, the Mets added an unearned insurance run in the eighth, and Edwin Díaz pithed the ninth for his seventh save in eight chances.

In all, the Nationals issued seven walks and made two errors as they dropped to 10-21.

“I’m starting to sound like a broken record, but the walks and the errors are going to hurt us,” Washington manager Dave Martinez said. “Some of these errors that we’re making are just — brutally honest — kind of lazy mistakes.”

Corbin threw five scoreless innings, working around three hits and four walks in his best outing of 2022. He allowed at least two earned runs in each of his previous six starts.

The Nationals selected the contract of Edwards from Triple-A Rochester and optioned Andres Machado there in a swap of right-handed relievers.

Mets: RHP Sean Reid-Foley will have Tommy John reconstructive elbow surgery. He went on the IL on May 1 with a partially torn ulnar collateral ligament in his pitching arm. … RHP Jacob deGrom (right shoulder blade) was transferred to the 60-day IL. He has started throwing from 60 feet on flat ground and is due for more tests in about a week. The move made room on the 40-man roster for LHP Locke St. John, who was waived by the Cubs.

Nationals: SS Alcides Escobar was a late scratch from the lineup because of an infection under the nail on his left index finger.