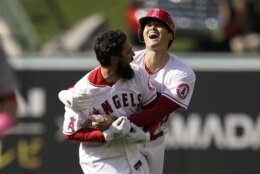 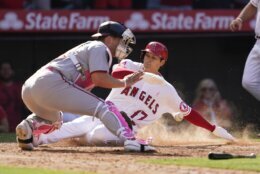 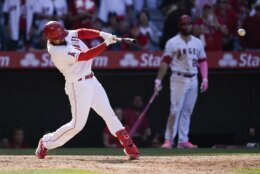 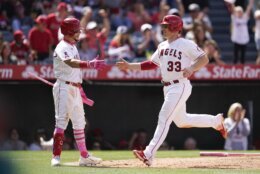 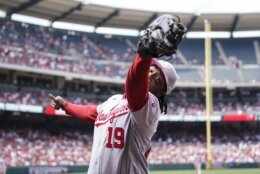 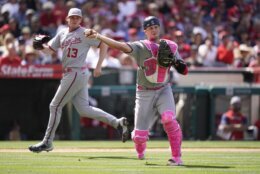 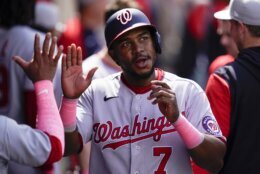 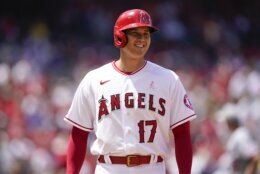 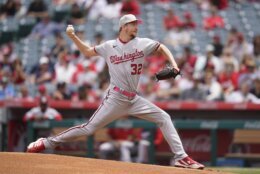 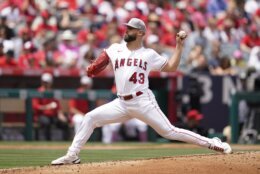 ANAHEIM, Calif. (AP) — Shohei Ohtani and Anthony Rendon struggled for most of the Angels’ weekend series against the Washington Nationals. Both came up with clutch hits to give Los Angeles a comeback victory in the finale Sunday.

Ohtani hit a tying, two-run double, Rendon followed with a game-ending single against his former team and the Angels stole away a 5-4 victory to win the three-game set.

“What’s so fun about this team and this offense is that we can ignite at anytime,” Rendon said. “We’ve had some games where we’ve ignited early and our pitching shuts them down the rest of the game, and we’ve had games where we’ve been shutout as hitters through eight innings on and then we come in and win it.”

The Angels trailed 4-2 going into the ninth. Luis Rengifo drew a walk with one out and advanced to third on Taylor Ward’s hit. Mike Trout struck out, then Ohtani drove a slider by Tanner Rainey (0-1) off the wall in center to tie it.

The reigning AL MVP had been 1 for 11 during the weekend series before that at-bat.

Rendon then lined a single to center and Ohtani slid to avoid Victor Robles’ throw home.

“I had a good start. By the way that ball landed, I was going to be able to score easily,” Ohtani said through an interpreter.

Rendon was 0 for 8 the first two games but had two hits Sunday to sink a team he spent seven seasons with and won a World Series title for in 2019.

It is the fourth walk-off hit of his career and first since signing with the Angels in 2020.

“I thought I got away with one there with Trout and then come back face Ohtani and the slider stays too much on the plate and zone and he does what he needs to do,” Rainey said. “I was trying to go up on Rendon and didn’t quite get up enough.”

Jack Mayfield also drove in two runs and Jaime Barria (1-0) got the win for the Angels, who had their second walk-off win this season.

“They pitched us well, we had been in a little bit of an offensive funk. But we have been good late,” Los Angeles manager Joe Maddon said. “We did a lot of good things but our team offensively is capable of more.”

All 11 of the Nationals’ hits were singles, including three by César Hernández. It is the first time since 2004, when they were the Montreal Expos, that they have had at least 11 hits with none going for extra bases.

Erick Fedde allowed only two hits in five innings with five walks and four strikeouts. The right-hander went a season-high seven innings on May 3 at Colorado and has allowed only one earned run in his last 12 innings pitched.

Washington opened the scoring in the third. With the bases loaded, Riley Adams scored on a slow grounder by Juan Soto up the middle that had a chance for a single, but Angels shortstop Andrew Velazquez made a diving stop and made a throw behind his back to get Hernández out at second.

The Nationals extended their lead to 3-0 in the sixth on a sacrifice fly by Lane Thomas’ and an RBI base hit by Alcides Escobar.

The Angels responded in the home half on Mayfield’s two-run single, which snapped an 0-for-11 skid.

The Nationals tacked on a run in the seventh on an RBI single by Josh Bell before the Angels rallied.

Ohtani is 5 for 26 in May and batting only .235, but the two-way Japanese superstar was getting more consistent contact over the weekend and driving it to left field.

“After the last couple games, I am feeling a lot better. I’m getting a better angle on the ball and getting it in the air. Take a few more days and I should be able to get there,” Ohtani said.

Angels: INFs David Fletcher (left hip strain) and Jose Rojas (undisclosed) were placed on the injured list. INF Luis Rengifo was recalled from Triple-A Salt Lake and the contract of OF Aaron Whitefield was selected from Double-A Rocket City.

Nationals: Begin a six-game homestand against the New York Mets on Tuesday. LHP Patrick Corbin (0-5, 7.16) is 5-8 in 20 career starts against the Mets.