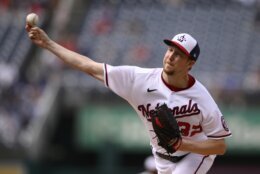 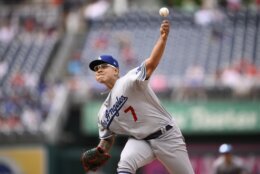 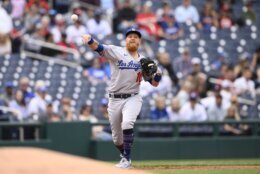 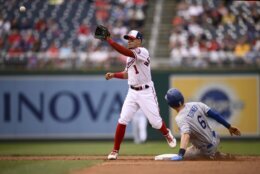 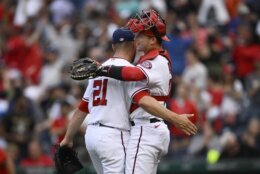 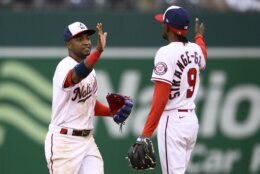 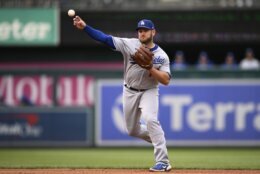 WASHINGTON (AP) — Erick Fedde and three relievers combined on a six-hitter, César Hernández had an RBI single and the Washington Nationals beat the Los Angeles Dodgers 1-0 Wednesday to avoid a series sweep.

Washington snapped a nine-game skid against Los Angeles. The Nationals had not defeated the Dodgers since Game 5 of the NL Division Series in 2019.

Tanner Rainey stranded two in the ninth inning for his fourth save in six tries, getting fly balls from Cody Bellinger and Will Smith to end it. It was Rainey’s first save since April 19.

“The ball was hit a little bit harder than I was hoping for,” Rainey said of the final out. “But when I saw (Juan) Soto running back and saw him turn around and camp under it a little bit, there was a lot of relief there.”

Los Angeles lost for only the second time in 11 games, but the Dodgers still own the best record in the National League at 29-14. Los Angeles, which had outscored Washington 19-5 in the first two games of the series, was shut out in the regular season for the first time since Aug. 29.

NL home run leader Mookie Betts was out of the lineup for a planned day off, but he struck out as a pinch hitter to lead off the eighth. That snapped Betts’ 12-game streak with a run scored, which was tied with Rafael Furcal (2010) for the Dodgers’ longest such stretch since they moved to Los Angeles and trailed only Zack Wheat’s 13-game run in 1925 in franchise history.

“We talked about an off day and I wanted to stay true to that,” Los Angeles manager Dave Roberts said. “I do believe in the shorter- and the longer-term, he’s going to stay healthy and it’s going to allow him to be more productive the rest of the way.”

Fedde (3-3) pitched six innings, allowing four hits and a walk while striking out six. Carl Edwards Jr. pitched the seventh, Kyle Finnegan escaped a two-on, one-out jam in the eighth and Rainey did the same in the ninth.

“It’s great when you can hand the ball over and watch three more zeroes go up on the board and hold the lead,” Fedde said. “We haven’t had a lot of opportunities to do that this year.”

The Nationals manufactured a run in the sixth off Julio Urías when Victor Robles walked, Alcides Escobar followed with a bunt single and Hernández singled to left to bring in Robles.

Urías (3-4) allowed a run and four hits in six innings, striking out three. He lost for the third time in four starts.

Dodgers: Bellinger (illness) was out of the lineup for the second day in a row but pinch hit in the seventh and remained in the game in center. … LHP Andrew Heaney (shoulder) will throw another bullpen Thursday in Arizona.

Nationals: RHP Joe Ross felt tightness in his elbow during a rehabilitation start Tuesday at Double-A Harrisburg and will have an MRI. Ross, who is recovering from surgery to remove a bone spur in his right elbow, threw three shutout innings. “It’s concerning, because it’s his elbow again,” manager Dave Martinez said. “But I don’t want to jump to any conclusions.” … INF Ehire Adrianza (quad strain) was 1 for 4 with a run Wednesday in his second rehab game at Harrisburg.

“I’m just more sickened by it and I’m still trying to put my thoughts together in some sense of trying to rationalize it, because I can’t,” he said.

Dodgers: RHP Mitch White (1-0, 6.17 ERA), who earned a win in relief May 17 against the Diamondbacks, makes his second start of the season as Los Angeles begins a four-game series at Arizona.

Nationals: LHP Patrick Corbin (0-7, 6.60), who gave up five runs in eight innings at Colorado on May 4, faces the Rockies again Thursday in the opener of a four-game series as Washington’s homestand continues.