Garrett Hampson and Brendan Rodgers each hit their first home runs of the season — both three-run shots — for the Colorado Rockies in a 9-7 win over the Washington Nationals on Thursday.
Listen now to WTOP News WTOP.com | Alexa | Google Home | WTOP App | 103.5 FM
(1/7) 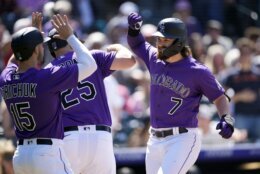 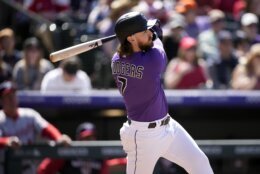 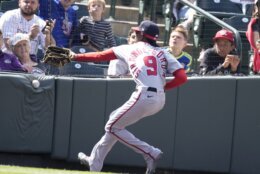 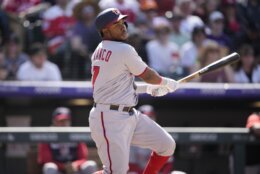 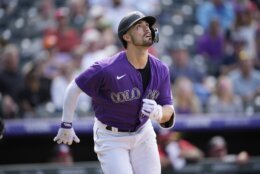 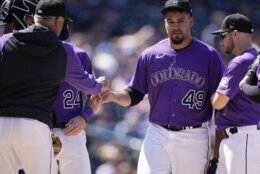 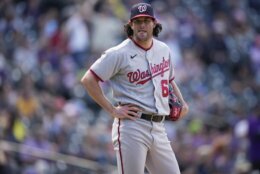 DENVER (AP) — Garrett Hampson and Brendan Rodgers each hit their first home runs of the season — both three-run shots — for the Colorado Rockies in a 9-7 win over the Washington Nationals on Thursday.

Randal Grichuk also homered for the Rockies, who took two of three in the series. Daniel Bard got three outs for his eighth save in nine chances. He has had six consecutive scoreless outings.

“Series wins is what we’re trying to accomplish and to be able to bounce back (after Tuesday’s opening 10-2 loss) was awesome,” Hampson said.

Down 2-0, the Rockies went off on Aaron Sanchez (1-2) for a four-run second inning, ignited by successive doubles from Ryan McMahon and Rodgers. Sam Hilliard reached on a fielding error by shortstop Alcides Escobar, his third error in two days, and Hampson followed with a drive into the left-field bleachers.

Washington had the makings of a big inning in the top of the fifth when César Hernández singled, Soto walked and Josh Bell doubled in a run. But catcher Dom Nunez picked Soto off at third for the first out and after a single by Yadiel Hernandez, Jhoulys Chacin (3-1) came on and got Maikel Franco to ground into an inning-ending double play.

“We got the crooked numbers, four runs in the second and four runs in the fifth,” Hampson said. “But every inning, it seemed like they had something going, so that’s just a credit to our bullpen especially and us on defense making the plays we needed to just kind of limit the big numbers which was in the end the difference in the game.”

The Rockies turned two double plays on the day, increasing their season total to 40, most in the major leagues.

C.J. Cron’s one-out RBI single in the bottom of the fifth chased Sanchez. One out later, Rodgers drove a 1-2 offering from Josh Rogers over the center field fence to boost Colorado’s lead 8-3.

“I thought Sanchez gave us a chance to win, one bad mistake and another mistake by Rogers,” Nationals manager Dave Martinez said. “Two costly mistakes. We hit the ball well. We had our chances. Double plays killed us again a little bit.”

Ruiz homered to lead off the sixth and Franco and Ruiz had RBI doubles in the seventh as Washington closed to within two runs before Grichuk’s solo shot off Kyle Finnegan in the bottom of the seventh.

A critical defensive play in the fifth — in which Soto was picked off third base by catcher Nunez — helped quell the Nationals momentum.

“I just think that’s in-game awareness, left-handed hitter up and knowing the Nationals in general are pretty aggressive with their leads and secondaries,” Rockies manager Bud Black said. “It’s something I think all teams sort of recognize at times, and against other teams not just the Nationals. They had some momentum — and I won’t speak for Soto, he’s an aggressive player — and we made a play.”

Nationals: DH-INF Nelson Cruz was not in the starting lineup for a second straight game due to some muscle tightness in his back. Martinez said he was hopeful Cruz could return to the lineup for Friday night’s game against the Los Angeles Angels.

Rockies: OF Kris Bryant (back) is making progress in his rehab but is not expected to be ready to come off the 10-day injured list on Friday, which is when he’s eligible for reinstatement. No timetable has been set yet for his return.

Nationals: RHP Joan Adon (1-4, 7.33 ERA) is slated to start Friday night in the series opener at the Los Angeles Angels.