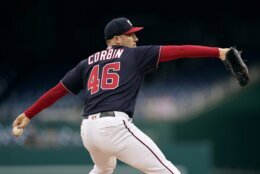 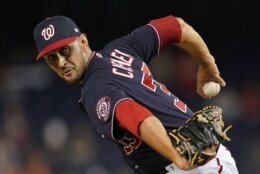 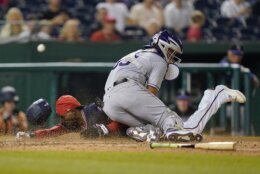 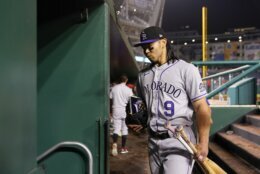 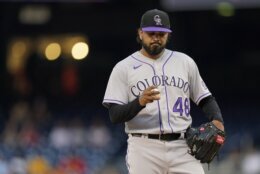 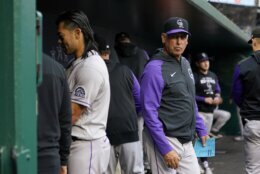 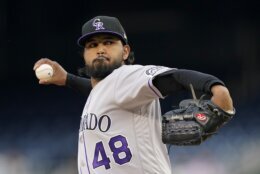 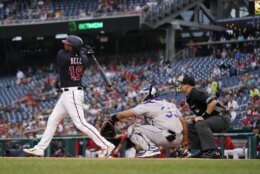 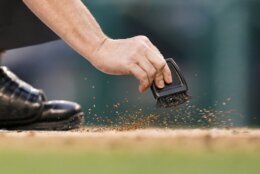 Corbin (1-7) has not won since last Sept. 23 at Cincinnati in his next-to-last start of the season. He gave up seven hits, struck out three and walked two, lowering his ERA from 6.60 to 6.30.

“It’s always good to get a win. It stinks it’s this late. I’ve been throwing pretty well,” Corbin said. “Sometimes it doesn’t matter how you pitch if their guy’s out there throwing really well. Obviously it’s good. I’m glad it’s behind us.”

César Hernández had a single, double, walk and scored twice for Washington, which took a 4-0 first-inning lead and improved to 7-17 at Nationals Park. Dee Strange-Gordan added a triple an a single.

Yonathan Daza and Elias Díaz each had two hits for Colorado, which has lost four of five. The Rockies went went 1 for 9 with runners in scoring position and hit into three double plays, dropping to 6-13 on the road. They are 14-11 at Coors Field.

“The first inning was rough. It looked to me as though the pitches were sort of in the middle of the plate,” Rockies manager Bud Black said. “Behind in the count and pitches in the middle against a group of hitters who are pretty good.”

Corbin induced a double-play grounder from Diaz with two on and one out in the second inning. Trailing 5-3, the Rockies loaded the bases with one out in the fifth, but Corbin got C.J. Cron to ground into a double play.

“Down and effective,” manager Dave Martinez said of Corbin’s outing. “A lot of ground balls. Ball was down which I really like a lot. He pitched well.”

Colorado had first and second with one out in the seventh before Daza hit into a double play against Victor Arano.

Rockies 2B Brendan Rodgers extended his season-high hitting streak to 13 games going 1 for 4 with a double and a run scored. During the streak he is batting .358 (19 for 53) with five doubles, a home run, nine RBIs and eight runs scored.

One day after earning a save against the Dodgers, Nationals closer Tanner Rainey was called on to pitch the eighth inning in a 6-3 game and retired the Rockies 3-4-5 hitters Charlie Blackmon, Cron and Ryan McMahon. “I talked to Rainey before the game,” Martinez said. “Gave him a heads up that if the situation arises, he’ll pitch to that (block) of guys there.” Steve Cishek worked the ninth.

ROCKIES: RHP Robert Stephenson (COVID-19 IL) is with the team and could be activated as early as Friday.

NATIONALS: RHP Joe Ross (right elbow bone spur removal), who felt tightness in his elbow during a rehabilitation start Tuesday at Double-A Harrisburg, underwent an MRI that showed more of a sprain than previous MRIs. Ross, who had Tommy John surgery in 2017, will undergo further tests before a course of action is determined.