Victor Robles stepped to the plate batting .045 when his RBI double provided Washington's first hit off Arizona starter Madison Bumgarner with two outs in the fifth inning, and the Nationals beat the Diamondbacks 6-1 in the opener of a split doubleheader before a record-low announced crowd of 9,261 Tuesday.
Listen now to WTOP News WTOP.com | Alexa | Google Home | WTOP App | 103.5 FM
(1/14) 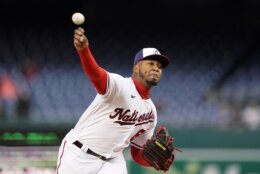 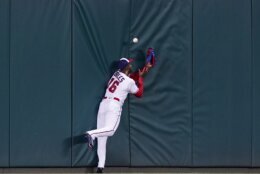 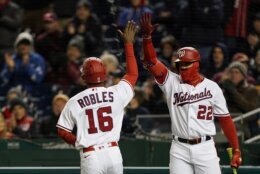 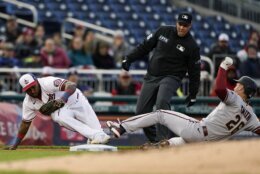 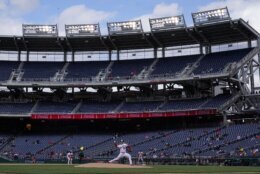 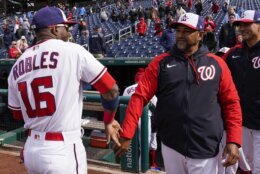 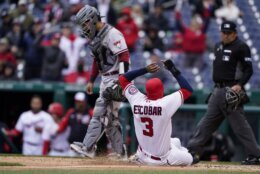 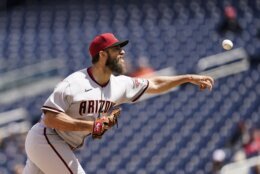 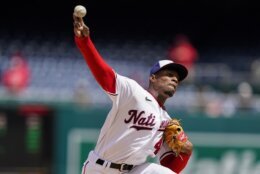 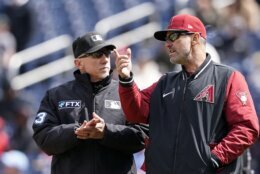 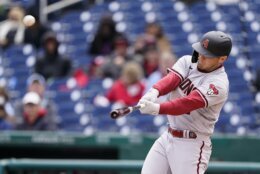 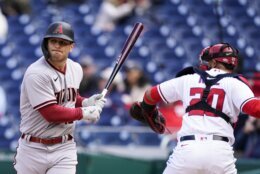 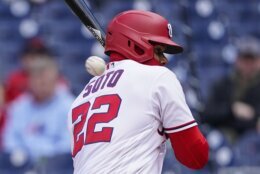 WASHINGTON (AP) — It might not seem like a big deal for a starting pitcher to get through the sixth inning. It was, however, for Joan Adon and the Washington Nationals.

“Hallelujah!” Nationals manager Dave Martinez sang, his voice rising to a higher octave. “We had two games today, so we needed it.”

Adon earned his first win in the majors in his fourth appearance by throwing 6 1/3 scoreless innings Tuesday night to help Washington beat the punchless Arizona Diamondbacks 1-0 and complete a doubleheader sweep.

In Game 1, played before a record-low announced crowd of 9,261 at Nationals Park, Victor Robles — who started the season 0 for 18 and was batting .045 in 2022 when he stepped to the plate to face Arizona starter Madison Bumgarner — delivered an RBI double for Washington’s first hit in the fifth, sending the hosts on their way to a 6-1 victory.

Adon (1-2), a 23-year-old right-hander, gave up three hits and walked two while striking out five in the nightcap. He never allowed a runner to reach third base. This was Washington’s 13th game of 2022 — the team is 6-7 — and first in which its starter completed at least six innings.

Asked how it felt to get victory No. 1, Adon smiled widely and replied in Spanish: “This is something ‘grandioso’” — a word that means “magnificent.”

The team helped him mark the occasion with some sort of celebration that Martinez wouldn’t detail — “He’ll remember it, let’s put it that way,” the skipper said — and left a team employee making a phone call asking for help cleaning up talcum powder in the home clubhouse shower area.

Robles played a key role in Game 2, too, singling to lead off the sixth against spot starter Tyler Gilbert (0-1) before coming around to score the lone run on a double by César Hernández.

Martinez said Hernández asked whether he should try to bunt Robles over.

“He said, ‘No, go swing, hit a home run for us right here,’” Hernández said through an interpreter. “So he gave me the green light.”

Gilbert, called up Tuesday from Triple-A Reno, allowed one run over 5 2/3 innings.

The Diamondbacks entered Tuesday with major league lows for batting average (.152) and runs (21), and the sweep with the temperature in the 40s dropped their record to 3-8.

“I feel like this team is going out there with the best intentions and grinding and playing as hard as they can,” Diamondbacks manager Torey Lovullo said. “We just can’t seem to get that big hit at the right time.”

They are averaging two runs per game.

“I saw the weather — very cold. And a lot of times, hitters don’t want to swing when it’s cold,” Adon said through an interpreter.

He dealt with the frigid conditions by reaching for a hand warmer in a back pocket.

In the sixth, Robles got a two-strike single to left, and Lucius Fox put down a sacrifice bunt that Gilbert fielded cleanly, but first baseman Christian Walker dropped the throw for an error. Walker’s vision might have been obstructed by Fox’s red helmet, which came off and got kicked up by one of his feet as he ran to the bag, eventually leaving Walker with a bleeding nose.

Hernández’s double off the base of the wall in left brought home Robles.

That was enough for Washington, which got the last eight outs from its bullpen — although not without some trouble in the ninth. Tanner Rainey put the first three batters aboard via a walk and two singles, then retired the next three for his third save.

In the opener, right-hander Josiah Gray (2-1) went 5 1/3 innings for Washington, allowing one run. Martinez replaced him with two lefty batters due up in the sixth.

“I wanted him to come out feeling good about himself — and he did that,” Martinez said about Gray, who arrived in the trade that sent Max Scherzer and Trea Turner to the Dodgers in July.

Gray’s take on being removed?

“Never really want the ball taken from me,” he said, “but I understood the situation.”

Daulton Varsho produced the Diamondbacks’ only run on an 18-inning day with a homer off Gray.

Bumgarner (0-1) gave up two unearned runs in his five innings.

The lefty whiffed the first two batters of the fifth, but that’s when Arizona unraveled, starting with a defensive miscue on a windy afternoon in which napkins flew from the stands and littered the outfield grass: Second baseman Ketel Marte didn’t hold onto a popup that should have been the third out.

That brought up Robles. Bumgarner left a two-strike pitch over the plate, and Robles smacked it down the left-field line to tie the game.

“I don’t focus on my personal numbers at all,” said Robles, who produced a two-run single on Sunday to lift his average from .000. “As long as I feel good out there, and the team’s winning, that’s all that matters.”

Other than in 2020 and 2021, when there were limits on spectators because of the coronavirus pandemic, the Game 1 attendance was the fewest fans announced for a Nationals home game since the team moved to Washington for the 2005 season.

The Nationals give the numbers of tickets sold, not people actually at the ballpark. The announced crowd for Game 2 was 11,720.