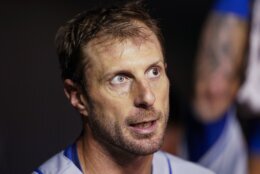 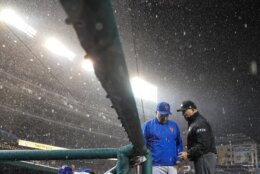 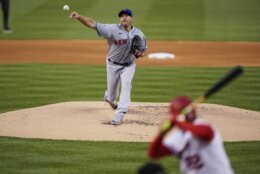 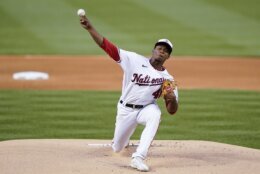 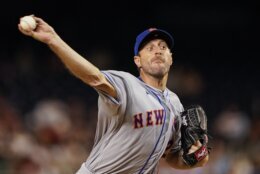 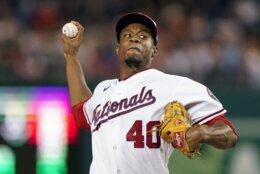 WASHINGTON (AP) — Mets star Franciso Lindor was face-down in the dirt near home plate, his helmet no longer atop his blue-dyed curly hair, his jaw smarting after being plunked — the fourth time a pitch struck a New York player in a span of 1 1/2 games against the Washington Nationals.

He heard, then saw, teammates and coaches storming out of the dugout Friday night. Manager Buck Showalter was cursing and shouting and leading the way.

“I got hit. I was on the ground. I hear scuffles. I look up. My whole entire team is out there. Whole entire coaching staff is out there,” Lindor said. “I could see the bullpen sprinting in. That says a lot.”

On an evening that began with a 14-minute delay because the stadium lights weren’t working and sputtered to an end with a 38-minute rain delay in the top of the ninth, Scherzer (1-0) allowed three runs and three hits in six innings in his debut for the Mets.

The right-hander was greeted by a standing ovation during his warmup tosses, then walked one, struck out six and gave up a two-run homer to former teammate Josh Bell that made it 3-all in the fourth. Scherzer — signed by New York to a $130 million, three-year deal — knew it was gone immediately, spinning around on the mound as soon as Bell made contact.

Back in the second inning, one of Scherzer’s pitches hit Bell. That followed three occasions during New York’s 5-1 win on Thursday when a Mets batter was struck — James McCann was plunked twice, and Pete Alonso left with a bloody lip in the ninth.

“I think they understood our frustration,” Showalter said about the umpires, who ejected Cishek and Nationals third base coach Gary DiSarcina on Friday.

“I don’t really want to hear about ‘intent,’” Showalter said, his arms crossed. “If you’re throwing up in there, those things can happen. Max didn’t have any trouble controlling the ball tonight.”

Crew chief Mark Carlson told a pool reporter that Cishek was tossed not for hitting Lindor but because he “continued to escalate the situation after the fact” by ”coming in towards the melee, basically.”

Similarly, Carlson said, DiSarcina was punished for being “one of the aggressors and not helping de-escalate it.”

Lindor’s X-ray came back negative and he cleared a concussion test. He had a red scratch near his chin and said he was cut inside his mouth and might have a cracked tooth. He expected to play Saturday.

“I don’t know how he didn’t have more damage,” Showalter said.

Cishek called the episode “totally unintentional” and apologized to Lindor when they ran into each other in the bowels of the stadium.

“I thought I was going to get a warning, for sure, but to be ejected was a bit of a surprise,” Cishek said.

He had just replaced starter Josiah Gray (0-1) — who arrived in Washington in the swap that sent Scherzer to the Los Angeles Dodgers at last July’s trade deadline — after the Mets had taken a 4-3 lead.

Scherzer tweaked his right hamstring late in spring training, creating uncertainty about when he would pitch. Nationals leadoff hitter César Hernández opened the game with a bunt, and Scherzer made the play without a hitch.

Hours before, Scherzer was the second player off a team bus that arrived at 3:50 p.m. When a gate was raised and the vehicle pulled up near the home clubhouse, he stepped down and, hands shoved into the pockets of a blue jacket, walked briskly down a hallway toward the visiting team’s digs.

Even though he was with Washington for 6 1/2 years and helped it win the 2019 World Series, the current roster is unfamiliar: General manager Mike Rizzo began rebuilding along the way to a second straight last-place finish last season.

“A lot of great memories here, but the team’s different,” Scherzer said. “It’s not the same team I played with.”

Mets: CF Brandon Nimmo had two hits, including a triple, a day after sitting out because of a stiff neck.

Nationals: Rizzo declined to offer a timeline for when RHP Stephen Strasburg (thoracic outlet syndrome surgery last year) might be ready to pitch.

RHP Chris Bassitt makes his first start for the Mets; he arrived from the Athletics in a trade less than a month ago. The Nationals start RHP Joan Adon, whose major league debut came in the regular-season finale on Oct. 3.