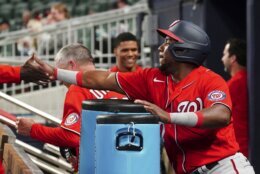 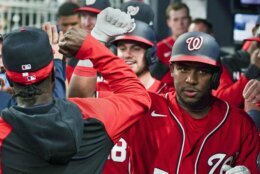 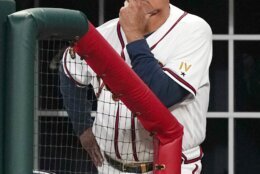 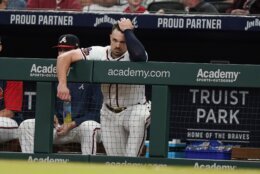 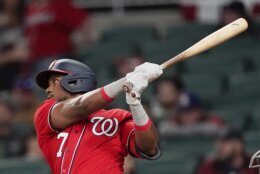 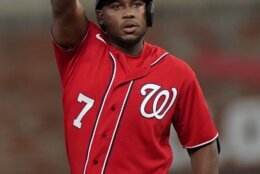 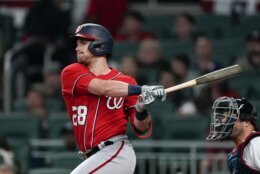 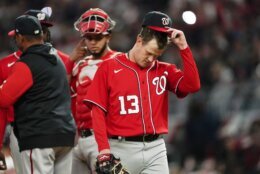 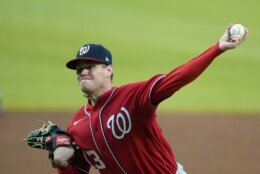 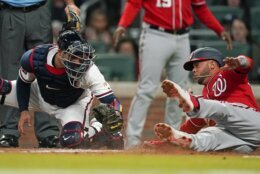 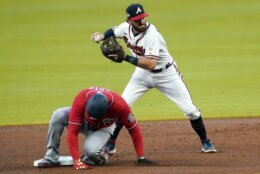 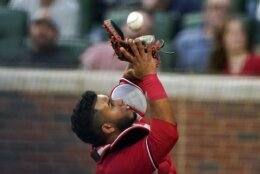 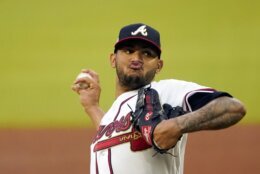 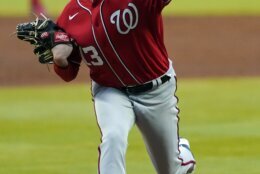 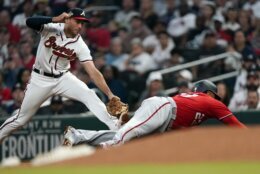 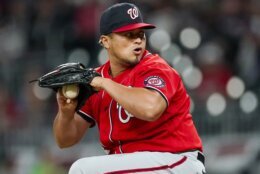 ATLANTA (AP) — Maikel Franco knew he needed an adjustment after his 1-for-13 start to the season.

A new approach paved the way for a dramatic turnaround for Franco and the Washington Nationals.

Franco drove in five runs on four hits, including a two-run homer, as the Washington Nationals beat Huascar Ynoa and the Atlanta Braves 11-2 on Monday night.

Franco homered to cap a five-run third inning, then added a three-run double off Tucker Davidson when the Nationals scored five more in the eighth to turn the game into a rout.

“That was a great adjustment for me today, just coming back, don’t think about anything, just go out there and see the ball and have a good game for me and for my team,” Franco said.

Franco said his main adjustment at the plate was “just don’t chase those pitches down and away” and “attack my zone.”

The Braves (2-3) lost their second in a row. Most fans in the sellout crowd of 42,263 left with their World Series replica rings, a much-anticipated promotion, well before the end of the game.

Josh Rogers (1-0) allowed only one run on two hits in 5 1/3 innings in an impressive fill-in start for Washington. The left-hander was recalled from Triple-A Rochester when scheduled starter Aníbal Sánchez was placed on the 10-day injured list with a stiff neck.

“I think I’d be lying if I said I wasn’t mad or down,” said Rogers of his emotions when sent to Rochester. “I tried to go to Triple-A and have a good attitude and turn the page.”

Lane Thomas doubled in two runs off Ynoa (0-1) in the third inning before Franco’s homer over Washington’s bullpen in left field pushed the lead to 5-1.

“He’s still trying to figure things out,” said Braves manager Brian Snitker of the 23-year-old Ynoa. “He’s not a finished product yet. … I have confidence in him making the adjustments he needs to make.”

Spencer Strider gave up one run in 3 1/3 innings.

Ozzie Albies doubled and scored on Marcell Ozuna’s two-out single to give Atlanta a 1-0 lead in the first. Rogers retired the next 10 batters.

Martinez met with his coaches before the game after learning the Nationals might be put up for sale. Martinez said managing principal owner Mark Lerner called him Monday morning to say his family is exploring the possibility of selling the team.

“To say the least, I was shocked,” Martinez said. ”… We’ll see where it takes us but I don’t want any distractions down here. We’re still going to play baseball and play to win.”

The attendance total was the fourth-largest in Truist Park history. The Braves have drawn more than 40,000 fans in four of their first five games. Sunday’s game against Cincinnati drew 38,233.

Nationals: Martinez said Sánchez, 38, was “still moving very gingerly but he does say he feels better.” The move to place Sánchez on IL with a cervical nerve impingement in his neck was retroactive to Friday. “We want to make sure he’s healthy before he even attempts to start throwing,” Martinez said.

Braves: C Manny Piña (sore left wrist) was held without a hit in his first start of the season. Snitker said he plans for Piña “to do a lot of catching” as the top backup to Travis d’Arnaud.

Nationals: LHP Patrick Corbin (0-1, 4.50) will start Tuesday night’s second game of the series after he lasted only four innings, allowing five hits and two runs, in a 5-1 loss to the New York Mets to open the season. He is 6-7 with a 3.48 ERA in 17 career games, including 15 starts, against Atlanta.

Braves: Snitker has not announced his starter. LHP Tucker Davidson was a candidate before he was gave up five runs in 2 2/3 innings in relief behind Ynoa and Strider. Now the Braves are more likely to call up one or two pitchers from Triple-A Gwinnett.